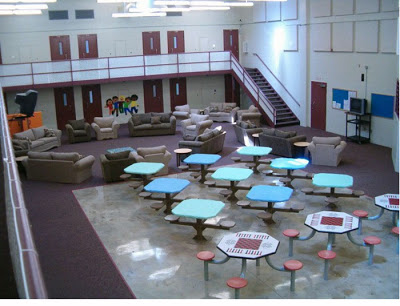 As ICE cynically says on their Web site, “The facility provides an effective and humane alternative to maintain the unity of alien families as they await the outcome of their immigration hearings or the return to their home countries.”
Family Friendly Lockups?
By Diana Claitor / The Rag Blog / June 12, 2009

Central Texas is one of two places in the entire U.S. where the federal immigration people are experimenting with family detention. The other is Pennsylvania.

Now, I don’t know about you, but I think we Austinites need to take every chance to show the feds and the world that we don’t approve, that we are not okay with refugee mamas and their babies and kids being incarcerated in a prison camp while their cases are decided.

The T. Don Hutto Center is not actually in Austin, but on the railroad tracks on the edge of nearby Taylor (about 30 miles east of Austin) and it is run by the Corrections Corporation of America (CCA), a for-profit adult corrections company.

On Saturday, June 20th, organizations from across Texas will be joined by Amnesty International and National LULAC in a vigil honoring World Refugee Day in front of the T. Don Hutto family detention center in Taylor, Texas.

A caravan will leave Austin from 2604 E. Caesar Chavez at 11:30 am. The vigil will begin with a 1pm walk from Heritage Park in Taylor. Protestors will gather for a vigil at the T. Don Hutto detention center at 1001 Welch from 2-4pm.

Warning: Get a map online beforehand, because it’s off the beaten track.

There will be speakers, music, art and a lot of that big red sun, so I will not do the walk but instead will go straight to the vigil at 2 p.m. and wear a hat. It would be good to see a strong Austin contingent there in light of the national visitors. Maybe some of us ex-Rag, ex-Sun and early Chron people want to say “Ya basta!” to this whole idea for detaining children.

Family detention is not a simple subject—check out the New Yorker article and see the two exceptional documentaries on Hutto—but one basic truth applies: it’s just not right. More humane and less-costly alternatives exist that keep families together and out of prison-like detention centers. A study by the Vera Institute found that more than 90% of immigrants on a supervised release program attended their immigration hearings. The average cost of a supervision program is $12 a day compared to reportedly over $200 a day to detain a person at Hutto.

And listen to the nine-year-old kid from Canada when he says, “I don’t like to stay in this jail …. this place is not good for me.”

This entry was posted in RagBlog and tagged Immigration, Texas, U.S. Government. Bookmark the permalink.