Vikki Bynum :
Racial violence, history, and the debate over
the Confederate flag

The Confederate flag symbolizes a sanitized and historically inaccurate version of the Civil War. 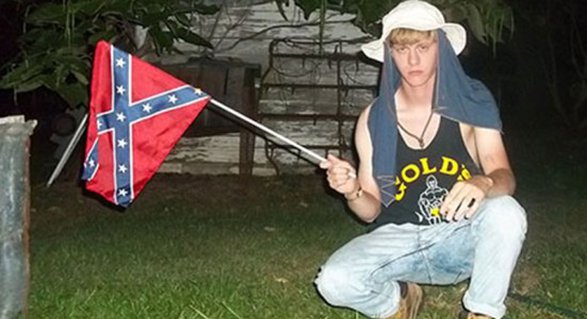 Dylann Roof: The Confederate flag was a favored symbol of racial hatred.

As a historian, I have long regretted the widespread popularity of a flag that represents the cause of Southern secession during the American Civil War, and which was flown in defense of racial segregation during the Civil Rights Era.

In the wake of Dylann Roof’s massacre of nine African-American men and women while they worshiped in the historic Emanuel A.M.E. Church in Charleston, South Carolina, we have learned that the Confederate flag was a favored symbol of the racial hatred that burns within Roof’s heart. His horrifying crime, in turn, quickly reinvigorated the long debate over whether that flag should continue to fly over state buildings in South Carolina and other southern states.

I am well aware of the ‘heritage’ argument against removal of the Confederate flag.

I am well aware of the “heritage” argument against removal of the Confederate flag, particularly the insistence by many that the flag commemorates the brave soldiers who fought for the Southern Cause, and that it has nothing to do with slavery. My own Mississippi ancestors were among those soldiers, and I’m sure that they were brave. In no way do I mean to dishonor them or diminish their sacrifices.

But I also know that my Southern ancestors, even those who owned slaves, may not have realized the full extent to which the war was indeed about the preservation of slavery. They likely believed more broadly, as political leaders assured them, that secession would preserve Southern honor and the Southern way of life, a life threatened by an aggressive Northern juggernaut determined to transform (and ultimately destroy) their world. They wouldn’t be the first or last soldiers to believe the jingoistic rhetoric of politicians bent on war.

As long as the argument about secession (and the flag) is framed as an ideological dispute among white men, the above statement will ring true to many. It’s when we include the “others” of society — most pointedly, but not exclusively, people of color — that the argument breaks down. For what was the “Southern Way of Life” based on, if not slavery? It was slave labor that built the cotton kingdom that underlay plantation society, and it was also slavery that kept the South overwhelmingly rural, a necessary condition for the livelihoods of small farmers and Piney Woods herders.

Racism was at the core of this way of life.

Racism was at the core of this way of life. I’m talking about the bred-in-the-bones belief among most 19th-century Southern and Northern whites that people of African ancestry were genetically inferior and decreed by God to serve them — if not as slaves then as poorly paid laborers. As several essays on my blog, Renegade South, demonstrate, in the South violence underlay slavery as a system of control, just as after the war it would underlay racial segregation.

To be sure, not all white Southerners believed that the slaveholding class represented their best interests; some even opposed slavery. And, especially among common farmers, there were those who blamed slave-based commercial agriculture rather than the North for the monopolization of lands and forests that propelled generation after generation of them to migrate to the Southwest. Mississippi’s Free State of Jones and the East Texas Big Thicket’s “jayhawkers” represent those farmers and herdsmen who opposed secession and deserted the Confederacy when the “rich man’s war” threatened to destroy not only their “way of life,” but their very lives.

Were these Unionist white Southerners nonetheless racist? Most probably were. Did they support equality of opportunity for former slaves after the war? Most did not. Hear the words of Colonel Samuel Thomas, assistant commissioner of the Freedmen’s Bureau, as he struggled in 1865 to bring order to Reconstruction Mississippi: white people, he wrote, “still have the ingrained feeling that black people at large still belong to white people at large. . . . To kill a Negro they do not deem murder, to debauch a Negro woman they do not think fornication [or rape!].” That same year, North Carolina district superintendent Clinton A. Cilley lamented that, were it not for the Freedmen’s Bureau, “blacks would be no better off than before the war.”*

Many whites believed that blacks were taking over ‘their’ country.

Like Dylann Roof today, many whites believed in the wake of Confederate defeat that blacks were taking over “their” country. Like him, they also believed that black men desired nothing more than to rape white women, although Col. Thomas’s remarks make clear that white men’s rape of women of color was the far more common crime.

As I wrote in 2010, “It is not surprising that Southern white men, especially former slaveholders, would rage against their loss of political authority and racial dominance.”* That sense of loss continues today in different yet historically-related ways for all too many Americans, and it is far more deeply-rooted than the mere removal of a Confederate flag can ever rectify. And, yet, that same flag symbolizes a sanitized and historically inaccurate version of the Civil War that has stood for far too long. Its removal could provide a useful starting point for a dialogue grounded in history rather than heritage.

This essay was first published at Renegade South and was cross-posted to The Rag Blog by the author.

[Historian Victoria Bynum is the author of Free State of Jones: Mississippi’s Longest Civil War, soon to be a major motion picture starring Matthew McConaughey. Professor Bynum, a graduate of the University of California, San Diego, taught in the history department of Texas State University for 24 years before retiring in 2010. Her research has centered on Southern dissenters, including families that opposed secession and the Confederacy. Her blog is Renegade South. Vikki Bynum lives in San Marcos, Texas.]

2 Responses to Vikki Bynum :
Racial violence, history, and the debate over
the Confederate flag