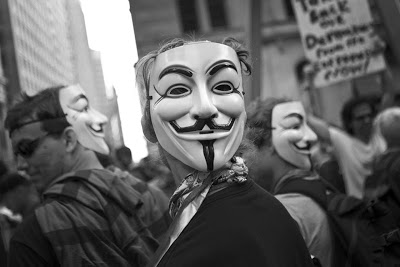 On October 3rd, protesters at Occupy Wall Street failed to march. Instead they clumsily lurched. With white painted faces, glazed looks and dollar bills hanging out of some mouths, protesters chanted “I smell money, I smell money…” It was Corporate Zombie Day.

Scenes like this and the sight of Guy Fawkes masks, clown suits, drumming circles, and surrealistic posters all over the country have left many commentators scratching their heads. Is this protest or carnival? Maybe we should tell them. There’s been a sea change in the protest industry.

“A worldwide shift in revolutionary tactics is underway right now that bodes well for the future,” proclaims Adbusters, the initiators of Occupy Wall Street. A key part of this rechanneling of tactics has been a move away from both angry protests or passive waiting-to-be-clubbed-by-police-batons to age-old carnival-style antics.

A festive atmosphere has reigned supreme in all of the successful pro-democracy uprisings of the past two decades. In Poland, Serbia, Georgia, Ukraine, Tunisia, and Egypt, music and humor were everywhere. Why?

Tunisia was “a pioneer in revolution and now it’s at the forefront in comic expression,” proclaims the voice of Captain Khuzba, the masked cartoon hero who fought Tunisia’s secret police armed with a loaf of French bread. In Serbia’s pro-democracy movement in 2000, Srdja Popovic, a leader of Otpor (“Resistance”) reports, “Everything we did had a dosage of humor.”

Otpor is the organization credited with forging the nonviolent tactics used in the Arab Spring and earlier pro-democracy movements in Georgia and Ukraine. Founded in 1998 following a period of failed demonstrations by a small ragged group of twenty-somethings, it had within two years built a movement that overthrew Serbia’s dictator Slobodan Milosevic.

Otpor learned early that humor could be a gigantic ice breaker, cutting through citizen’s fear and apathy and “turning oppression upside down.” They fine-tuned the art of comedic resistance, added modern marketing techniques and the strategic framework provided by Gene Sharp.

The starting point for Sharp in From Dictatorship to Democracy is a recognition that “The common error of past improvised political defiance campaigns is the reliance on only one or two methods, such as strikes and mass demonstrations.” His remedy was a heavy dosage of “low-risk, confidence-building actions.” Street theater and under-the-radar comic protests.

Following this path, Mykhailo Svystovych, of Ukraine’s youth movement group Pora (“It’s Time”) recalls: “We didn’t do rallies with speakers, we did theatrical events.” The massive rallies we viewed on TV — this was the final chapter prepared by years of small guerrilla incursions.

Who were Otpor’s heroes? In interviews they list names we might expect: Gandhi, Martin Luther King Jr., and an unexpected source: Monty Python’s Flying Circus.

Stop the presses. What? How did those clowns sneak into the club? What is it about Monty Python-style humor that lends itself to deposing tyrannies? Let’s look closely at the exact laughter creating tactics developed in these movements so you can judge for yourself — and maybe add to your own resume.

Fortunately, excellent stories have been collected by authors Tina Rosenberg (“Revolution U”), Patrick Kearny (A Carnival of Revolution), Matthew Collin (The Time of the Rebels) and video producer Steven York (A Force More Powerful). 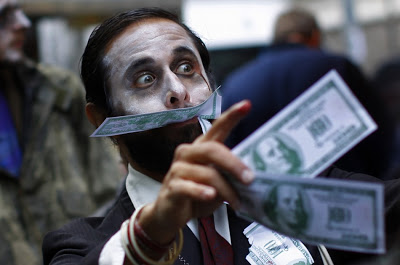 1. Flying under the radar

Dictators typically outlaw protest marches and give their security forces carte blanche to bash heads. In South Africa, blacks “solved” the problem by assembling large gatherings at funerals, the one kind of gathering the Apartheid government was not ready to ban. How could the deceased help it if she or he had tens of thousands of friends who wanted to mourn and follow the hearse through town?

In Serbia, Otpor developed a tactic of “flash” protests, introducing a game called “Arrest the Traffic Lights.” People would mob street intersections and simply jump up and down while the walk lights were green. When the light changed they’d carefully obey the law and disperse only to resume their protest when the light said “go” again.

In Chile in 1983 labor unions made plans for their first test of Pinochet after 10 years of violent repression. Copper miners about to go on strike observed the large number of soldiers assembling by their mines and swiftly changed tactics. Instead of a strike, they called for a national day of slow movement.

All over Chile, people simply drove, walked or worked in slow motion to express their solidarity. Later they banged on pots and pans at exactly 8 p.m. How do you arrest slow walkers or pot bangers? It’s a massive clown routine worthy of a Marcel Marceau. How could you not smile at your fellow slow motion actors? After that the ice was broken and an irresistible wave of protests began.

If protests against a government are being discouraged, and you feel a need to walk with a large group, you can always choose to march in “support” of the government. So Otpor paraded “for” Milosevic’s socialist party, but did so with a small herd of sheep with signs around their necks announcing “We support the Socialist Party.”

In the Ukraine, student members of Pora (“It’s Time”) fought against the usurped election of their local tyrant named Yanukovych. He had a prison record so Pora members dressed up in prison uniforms and campaigned for him in the main streets of Kiev, Ukraine’s capitol.

In Egypt, activists helped government officials by setting up Facebook pages for them and Twitter accounts so they could spread their messages. One official’s favorite activities were listed for him as: “Kicking ass, taking names, and wearing decorations with more colors than you can find in a pack of Skittles.”

In Poland in 1987, a group of “socialist surrealists” called the Orange Alternative (combining Communist red with the Catholic yellow) produced parodies of official events. On one April Fool’s Day they marched to the central square in Wroclaw to express their love of the government through a voluntary work day.

Armed with mops and toothbrushes — which was very inefficient, I might add — they proceeded to clean up the square while singing socialist labor songs and dressing up like ideal workers from old Stalinist movies of the 1930s. Police again confronted the problem — what can you arrest them for? Cleaning up the square is a crime? Acting as fools gained protesters immunity from repression and a strengthened community of smiling co-conspirators. 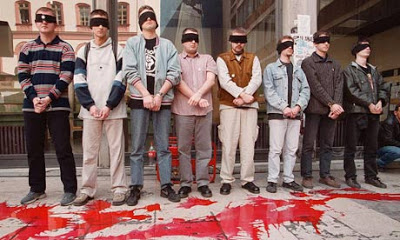 3. Therapeutic pies in the face

If moving slowly together can help create community, imagine what collectively throwing a pie in the face of a dictator can be like. Otpor, in their most famous actions, brought out a barrel with Milosevic’s picture on it and let people hit it with a stick for only one dinar. Those who were unemployed because of Milosevic could hit it twice for free. The police only looked ridiculous when they stepped in to, in the words of Otpor, “arrest” the barrel. Pictures of the “arrest” would soon be posted in the Internet.

In Georgia in 2003, the group Kmara (“Enough”) created large banners where passers-by could take photos of themselves flushing their president, Eduard Shevardnadze, down the toilet. In Ukraine, by 2004 the action had moved to the Internet where citizen’s could throw eggs at their soon to be deposed leader Yankukovych, who had famously overreacted to a real egg throwing incident.

What is hitting a picture of a dictator but a version of the dunk tank? These actions go back to centuries-old carnival traditions of ridiculing the high and mighty. They crop up in movement after movement because they meet very basic needs. Throwing a pie at authority can be a low-risk participatory event with an appreciative community cheering one on. It’s not lazily watching Jon Stewart on TV — it’s physical action against authority, a physical break with patterns of passivity and isolation, a nonviolent rechanneling of simmering anger.

4. Idiocy rising to the top

Much of the humor of movements requires faith, a conviction that if you just set the table, the other side’s idiocy will provide all the humor necessary. For example, Otpor had their offices raided and computers hauled away. Knowing they had an informer “assisting” their activities, they put out the word they would be bringing in a load of new computer equipment. At the “secret” time trucks pulled up with heavy looking boxes. While laboring to lift these loads, the police intervened, only to discover all the boxes were empty. The story, with photos, went viral.

When Serbia’s government leveled charges that Otpor was a foreign-paid terrorist organization, Otpor took flatbed trucks and megaphones to the streets to denounce and expose the “terrorists” in their midst. They brought 17 and 18-year-old “terrorist” students in front of the public and grilled them about their activities.

Similarly, in Egypt, when the government officials denounced the protesters for serving “foreign agendas,” young people showed up at Tahrir Square with plain blank notebooks, complaining they’d left their foreign agendas at home. 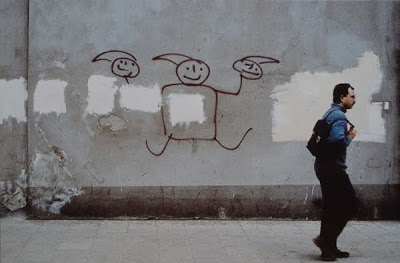 Community organizing guru Saul Alinsky’s famous Rules for Radicals #3 states: “Whenever possible, go outside the experience of the enemy.” Or any forms of rationality they might ever recognize.

We enter here into pure Monty Python territory. Otpor, for example, would hold fake soccer games in the streets complete with uniformed referees and an imaginary soccer ball. Or they would hold parades in ridiculous fancy dress with no protest slogans, or gaily deliver cookies and flowers to police stations.

My favorite example is from the Orange Alternative in Poland. After the group carefully spray-painted graffiti around Wroclaw, the police would come by and paint it over with white paint. This would leave unsightly white splotches on building walls. Instead of posting yet more graffiti, the activists took red paint and turned the splotches into elves. (Think of Hegel’s dialectic here — but on LSD). As more and more red elves appeared, this morphed into a demonstration where thousands dressed up in red and marched chanting “Elves are real!”

American activists will recognize most of the elements of the festive model. Certainly the street theater of the AIDS Coalition to Unleash Power (ACT UP) or “Billionaires for Bush” anticipates much of the spirit of the pro-democracy movements. But what stands out in the new movements is the integration of the class clowns with the nerds, of spontaneity with nonviolent discipline.

Traditionally people attracted to festive protests, group hugs, and consensus decision-making have been too laid back to organize effectively. The successful pro-democracy groups have managed to combine these elements with a caffeinated backbone of organizers who make the trains run on time and know when to shift gears.

Otpor leader Srdja Popovic, succinctly makes the point: “You can have 100,000 people in the streets and one single idiot who’s throwing stones, and he’s going to be the star of the day and this is how media operates.” The remarkable level of nonviolence maintained by these movements points to a concerted behind-the-scenes enforcement of a “no-idiocy” policy that leaves Seattle WTO veterans green with envy.

Monty Python-style humor is rooted in centuries-old carnival traditions which, as Russian scholar Mikhail Bakhtin has so brilliantly taught us, emphasize that all of us are fools and clowns just waiting to slip on banana peels. It has a humility that cuts through any vestiges of elitism or know-it-all political correctness.

Carnival represents the joyful life that stands as the total opposite of the zombie-like death of corporate rule. It’s what I believe allowed Otpor and other pro-democracy groups of twenty-somethings to bridge age and cultural gaps and build powerful movements.

Occupy Wall Street is a bold “experiment in truth,” which my stock analysts tell me should lead to a bull market in protests. Let’s keep a smile on it.

[Wayne Grytting is the author of American Newspeak: The Mangling of Meaning for Power and Profit and a former teacher in Seattle. He writes a blog — Penetrating the Fog — on the uses of humor to open closed minds. This article was first published at Waging Nonviolence.]