We Will Reap What We Have Sown 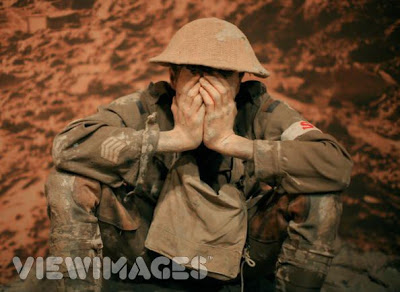 Earlier this week I was put in contact with the mother of a young Iraq veteran. Michael is twenty years old, with experiences no young person should have to face.

Michael chose to serve in the National Guard. Michael returned from Iraq with more than one medal for his service. But after a year long tour at Abu Ghraib, Michael returned with more than just medals – he brought a storehouse of experiences no person of good conscience could ever erase and this young man was not equipped with the tools he needed to quiet his mind and forget the reality of those memories.

Michael was not lost in the system. He received, and continues to receive counseling from the VA for his combat stress. He has the support of his command who has acknowledged the intense conditions under which Michael served. His family has watched over him, supported him and many in his community have embraced him. In the end, war has taken its toll. Michael faces a trial this week and this decorated young veteran, after choosing to serve his country at war, now stands to add years in prison to the list of obstacles his choices have given him.

Michael could not erase the horrors of what he saw in Iraq. Michael is proud of his service – a soldier committed to supporting the soldiers he has served with because he knows firsthand just how much each has given. Even more, Michael knows just how much understanding they now need. The medications couldn’t hide the memories, and the intoxicating effects of the 70 proof contents of a simple glass bottle couldn’t hide them either, bringing instead even greater heartache and the endless nightmare of a lifetime of regrets.

Michael lost his childhood in Iraq and returned to lose one remaining connection to better times when his attempt at self-medicating failed and his best friend lost his life in an accident Michael’s intoxication caused.

Politicians stand at podiums and talk about the cost of war.

Anti-war advocates preach from microphones and bullhorns on the steps of our nation’s capitol, outside city halls across the country and in parades down main streets in every middle-American community that they can reach.

Ignorant commentators issue harsh criticism of those who have volunteered, lashing out at the naiveté of the men and women who stood for what they believed, who acted in good faith and with trust for the words of commanders who had sworn not to abuse the lives entrusted to their leadership, as if those commentating had some higher enlightenment of right and wrong when more often than not they have never stood for anything more than photo opportunities.

Documentaries have been made showing bullet holes piercing the bodies of children no more than one year old; lives lost before they even knew to be afraid.

Many veterans have returned to offer public witness to their horrors while others have simply walked away in painful silence.

Americans shake their heads at the terrible effects of a natural rage – tornadoes, hurricanes, tsunamis, fires and floods destroying lives across the world – pity for the masses of people left homeless, sending care packages as a way to alleviate their guilt for not knowing the reality of what so many others have had to face. How many Americans turn a blind eye to the horrible effects of their own insatiable greed and ignorance for the truth of being human?

We blame our faults on the evil in the world – the evil side of a creator who gave us peace hoping we would know what to do with it; now standing watch as we pretend to have no control over the destruction we alone have caused.

Intellectuals congregate and discuss the psychological reasons for our lack of humanity.

Evangelicals shout from the mountaintops – “We MUST be afraid!”

A soldier stands alone as the chaos swirls around him – wondering “what have I done, where have I gone and how will I ever get back home?”

Wars come and go. Men and women die. Children are born. Economies falter, homes are lost, families are destroyed and futures questioned. The world circles and the cycles repeat themselves as a veteran generation remembers, issuing warnings of caution to a generation coming; a multitude believing themselves to be stronger against the tide than those who came before. As another generation grows old learning that life happens in spite of the effort to control it, the repeated cycles of chaos and division are nothing more than giant spinning wheels churning the mud in a mad attempt to veil the simplicity of the answers to questions most don’t even realize they are asking.

We know the prize; we talk about the dream, the vision, the goal. We paint it with psychedelic colors, glorify it in song, with poetic phrases; holding hands and lighting candles in the hope we can call it to the center of our circle, enjoined arms wrapping tightly to keep it from escaping our grasp. But it is not meant to be held, it is meant to be given with no obligation and no expectations. How long before we finally understand?

The war is coming home and still Americans don’t fully comprehend what we are about to receive.

We will reap what we have sown.

Michael gave what he believed was needed as he stood in response to what he felt called to do. Michael has paid a heavy price; more than any young man should have to pay. It is only the beginning, and a long jail sentence will not bring justice for an accident caused by something far more deadly than driving while intoxicated, with a responsibility shared by thousands who will never realize the cost of their complacency.

Michael, and thousands of others who will return from war to face their own storehouse of demons, deserve people to stand boldly in defense of what is right and just. They deserve people to work together to bring the changes we all need to help our world move a little closer to the goal of peace.

Michael stands to go to trial this week, but Michael should not be standing alone. Every citizen who has not yet stood to see that justice is served in the name of peace shall bear responsibility for what we all are about to receive.

Aren’t we all responsible when a veteran returns from a war we allowed to happen, with a storehouse of experiences whose demons he is powerless to silence?

Aren’t we all responsible for ensuring that true justice is served?

Monica is a senior care advocate. Her husband, Sgt. Kevin Benderman, a ten-year Army veteran served a combat tour in Iraq and a year in prison for his public protest of war. She continues to work within their community to promote resources for veterans and the elderly.

They may be reached at mdawnb@coastalnow.net. Please visit their website, http://www.bendermandefense.org/ to learn more.