What’s in a Name? ‘César Chávez Blvd’ and Dallas’ Own Border Fence 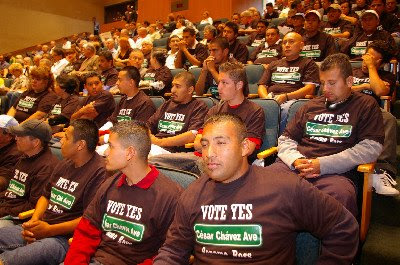 right-wing, anti-immigrant forces… dig in their heels and draw their own border fence to block Latino street names…

Although Latinos are the largest ethnic community in Dallas, comprising 43% of the population, few streets are named for Latinos. This could have changed after Dallas’s political leadership announced that in May 2008 that it would rename a major thoroughfare (now Industrial Blvd.) on the basis of an online/telephone poll among twelve potential names. The winner, with 52% of the 22000 votes cast, was César Chávez Blvd.

But the committee supervising the vote, which included City Council members, clearly did not anticipate such an outpouring for César Chávez. It announced that the vote was not binding — i.e., irrelevant due to the outcome — and recommended changing the name to Riverfront Blvd. The Council approved this.

The Council’s flagrant ignoring of the city’s poll results did not sit well with the Latino community.

Alberto Ruiz, Chairman of the César Chávez Task Force, told the North Dallas Gazette, “When they do call for a vote, the citizens take the time to vote and give input to the city and to have that vote overwhelming in favor of one outcome. Then to have that outcome rejected outright was seen by many as a slap in the face.”

Since the Council refused to rename Industrial Blvd after Chávez, activists have pushed to rename another street. City political leaders indicate a desire to find the appropriate street, but the slow pace of their efforts continues to frustrate Latinos and other Chávez backers.

Is the Problem Chavez, or Street Renaming?

As noted above, many oppose street renaming for fiscal and business reasons, as well as out of a desire to preserve the past. But for many others, a group perhaps disproportionately represented on newspaper comment blogs, renaming a street for César Chávez is part of a continuum of increasing demands made by Latino immigrant rights advocates and their supporters.

To the extent that right-wing, anti-immigrant forces feel under siege from a “liberal” media and now the Obama presidency, they at least have control of their local communities. Until, that is, Latino and labor activists start demanding that streets be renamed for César Chávez.

At that point, nothing is safe. So people dig in their heels and draw their own border fence to block Latino street names.

This entry was posted in RagBlog and tagged Bigotry, Dallas, Hispanic, Immigration. Bookmark the permalink.

1 Response to What’s in a Name? ‘César Chávez Blvd’ and Dallas’ Own Border Fence