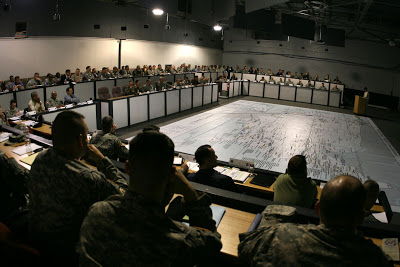 A little-noticed story surfaced a couple of weeks ago in the Army Times newspaper about the 3rd Infantry Division’s 1st Brigade Combat Team. “Beginning Oct. 1 for 12 months,” reported Army Times staff writer Gina Cavallaro, “the 1st BCT will be under the day-to-day control of U.S. Army North, the Army service component of Northern Command, as an on-call federal response force for natural or manmade emergencies and disasters, including terrorist attacks.” Disturbingly, she writes that “they may be called upon to help with civil unrest and crowd control” as well.

The force will be called the chemical, biological, radiological, nuclear or high-yield explosive Consequence Management Response Force. Its acronym, CCMRF, is pronounced “sea-smurf.” These “sea-smurfs,” Cavallaro reports, have “spent 35 of the last 60 months in Iraq patrolling in full battle rattle,” in a combat zone, and now will spend their 20-month “dwell time”—time troops are required to spend to “reset and regenerate after a deployment”—armed and ready to hit the U.S. streets.

The Army Times piece includes a correction stating that the forces would not use nonlethal weaponry domestically. I called Air Force Lt. Col. Jamie Goodpaster, a public-affairs officer for Northern Command. She told me that the overall mission was humanitarian, to save lives and help communities recover from catastrophic events. Nevertheless, the military forces would have weapons on-site, “containerized,” she said—that is, stored in containers—including both lethal and so-called nonlethal weapons. They would have mostly wheeled vehicles, but would also, she said, have access to tanks. She said that any decision to use weapons would be made at a higher level, perhaps at the secretary-of-defense level.

Talk of trouble on U.S. streets is omnipresent now, with the juxtaposition of Wall Street and Main Street. The financial crisis we face remains obscure to most people; titans of business and government officials assure us that the financial system is “on the brink,” that a massive bailout is necessary, immediately, to prevent a disaster. Conservative and progressive members of Congress, at the insistence of constituents, blocked the initial plan. If the economy does collapse, if people can’t go down to the bank to withdraw their savings, or get cash from an ATM, there may be serious “civil unrest,” and the “sea-smurfs” may be called upon sooner than we imagine to assist with “crowd control.”

The political and financial establishments seem completely galled that people would actually oppose their massive bailout, which rewards financiers for gambling. Normal people worry about paying their bills, buying groceries and gas, and paying rent or a mortgage in increasingly uncertain times. No one ever offers to bail them out. Wall Street’s house of cards has collapsed, and the rich bankers are getting little sympathy from working people.

That’s where the sea-smurfs come in. Officially formed to respond to major disasters, like a nuclear or biological attack, this combat brigade falls under the U.S. Northern Command, a military structure formed on Oct, 1, 2002, to “provide command and control of Department of Defense homeland defense efforts.” Military participation in domestic operations was originally outlawed with the Posse Comitatus Act in 1878. The John Warner National Defense Authorization Act for Fiscal Year 2007, however, included a section that allowed the president to deploy the armed forces to “restore public order” or to suppress “any insurrection.” While a later bill repealed this, President Bush attached a signing statement that he did not feel bound by the repeal.

We are in a time of increasing economic disparity, with the largest gap between rich and poor of any wealthy industrialized country. We are witnessing a crackdown on dissent, most recently with $100 million spent on “security” at the Democratic and Republican national conventions. The massive paramilitary police forces deployed at the RNC in St. Paul, Minn., were complete overkill, discouraging protests and conducting mass arrests (National Guard troops just back from Fallujah were there). The arrest there of almost 50 journalists (myself included) showed a clear escalation in attempting to control the message (akin to the ban on photos of flag-draped coffins of soldiers). There are two ongoing, unpopular wars that are costing lives and hundreds of billions of dollars. Nobel-winning economist Joe Stiglitz estimates that Iraq alone will cost more than $3 trillion.

In December 2001, in the midst of restricted access to bank accounts due to a financial crisis, respectable, middle-class Argentines rose up, took to the streets, smashed bank windows and ultimately forced the government out of power, despite a massive police crackdown and a failed attempt to control the media. Here in the U.S., with the prospect of a complete failure of our financial system, the people have spoken and do not want an unprecedented act of corporate welfare. We don’t know how close the system is to collapse, nor do we know how close the people are to taking to the streets. The creation of an active-duty military force, the sea-smurfs, that could be used to suppress public protest here at home is a very bad sign.

Denis Moynihan contributed to this column. Amy Goodman is the host of “Democracy Now!” a daily international TV/radio news hour airing on more than 700 stations in North America.