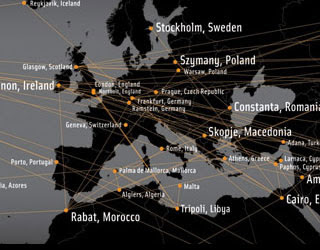 Exclusive: I Was Kidnapped by the CIA
By Peter Bergen, MotherJones, March/April 2008 Issue

For hours, the words come pouring out of Abu Omar as he describes his years of torture at the hands of Egypt’s security services. Spreading his arms in a crucifixion position, he demonstrates how he was tied to a metal door as shocks were administered to his nipples and genitals. His legs tremble as he describes how he was twice raped. He mentions, almost casually, the hearing loss in his left ear from the beatings, and how he still wakes up at night screaming, takes tranquilizers, finds it hard to concentrate, and has unspecified “problems with my wife at home.” He is, in short, a broken man.

There is nothing particularly unusual about Abu Omar’s story. Torture is a standard investigative technique of Egypt’s intelligence services and police, as the State Department and human rights organizations have documented myriad times over the years. What is somewhat unusual is that Abu Omar ended up inside Egypt’s torture chambers courtesy of the United States, via an “extraordinary rendition”—in this case, a spectacular daylight kidnapping by the Central Intelligence Agency on the streets of Milan, Italy.

First introduced during the Clinton administration, extraordinary renditions—in which suspected terrorists are turned over to countries known to use torture, usually for the purpose of extracting information from them—have been one of the cia’s most controversial tools in the war on terror. According to legal experts, the practice has no justification in United States law and flagrantly violates the Convention Against Torture, an international treaty that Congress ratified in 1994. Nonetheless, Congress and the American courts have essentially ignored the practice, and the Bush administration has insisted that it has never knowingly sent anyone to a place where he will be tortured.

But Abu Omar’s case is unique: Unlike any other rendition case, it has prompted a massive criminal investigation—though not in the United States. An Italian prosecutor has launched a probe of the kidnapping, resulting in the indictment of 26 American officials, almost all of them suspected cia agents. It has also generated a treasure trove of documents on the secretive rendition program, including thousands of pages of court filings that detail how it actually works. Late last year, I traveled to Milan to review those documents and to Egypt, where Abu Omar now lives. What I found was a remarkable tale of cia overreach and its consequences—a tale that could represent the beginning of a global legal backlash against the war on terror.