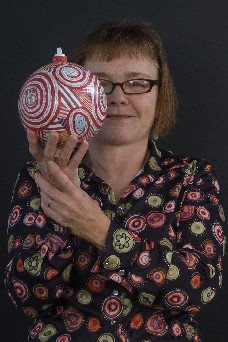 That controversial ornament calling for President Bush’s impeachment? Won’t hang in the White House after all

“Oh, dear,” said Seattle-based artist Deborah Lawrence, who created the red and white ornament that salutes Rep. Jim McDermott (D-Wash.) and his support for a resolution to impeach the president. “This doesn’t really surprise me. But it’s disappointing that I won’t get to see it on the tree.”

Laura Bush asked all members of Congress to pick artists from their districts to decorate ornaments, presumably highlighting local landmarks and heroes. Lawrence, 55, used the opportunity to honor McDermott, a strong critic of Bush. The collage artist glued tiny text on the nine-inch ball thinking no one would actually read her embedded “subversive” message.

But Lawrence shared her secret protest with friends, and the news quickly spread. “An artist doesn’t always get this kind of attention,” she told us. “It took on a life of its own, obviously. In a way, I’m speechless.”

Sally McDonough, a spokeswoman for the first lady, confirmed the ornament would not be displayed. “It’s inappropriate and it’s not being hung,” she said. She said that when asked about the issue yesterday, the White House tree decorations were not complete. “We reviewed the ornament along with all the [other] ornaments, and Mrs. Bush deemed it inappropriate for the holiday tree.”

Lawrence is still slated to attended a White House reception for the artists this afternoon.