What I Did Over Spring Break

I saw this flock of cormorants last year at Padre Island, but had no film left. Last week it was like we had an appointment! They came flying up the National Seashore shoreline from the SW, just at 6 pm, headed towards their fishing grounds and/or the incoming shrimp boats!

Last year the flock wasn’t quite so numerous — they may be nesting down on the 4-wheel-only part of the island, and seem to be prospering — there are 28 in this group!

Each bird must have a three- to four-foot wingspan. I wish there was something to give some perspective to the pictures, but between the time the birds appeared out of the haze, probably a half-mile distant, and the time I turned the camera IN MY HANDS on, they had come too close, over the flat landscape of sand and surf, and were too high, to get anything but sky and bird in the frame as they sped directly overhead (3rd photo). They appear to beat their wings slowly, like oarsmen rowing with long oars, but the whole formation is truly hauling birdbutt! This 4-photo sequence was taken pretty much as fast as I could track and shoot with a Pentax IQZoom with 130m lens. 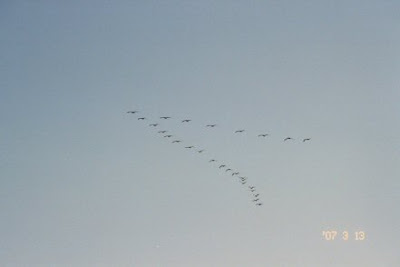 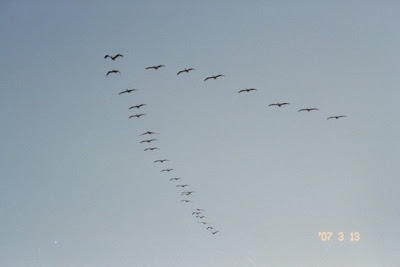 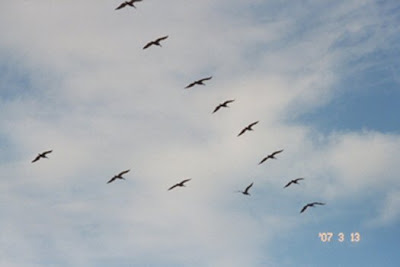 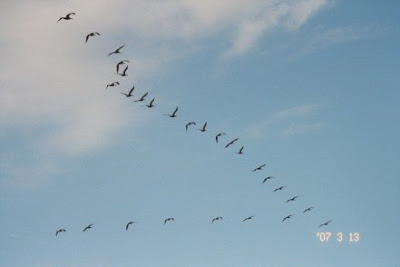 Ed’s Note: These were to have appeared last week, but I slipped. R. Jehn