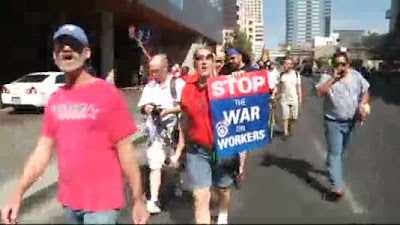 AUSTIN — Five hundred union members marched through downtown Austin, Sunday, October 23, chanting, “What do we want? Union jobs,” and “They got bailed out, we got sold out,” during the Occupy Austin Labor Solidarity March. Ironworkers, sheet metal workers, electricians, telecom workers, and transit workers marched alongside teachers, state and local government workers, and EMS technicians.

Phil Bunker, vice president of Teamsters Local 657 explained to me how the war on workers is affecting local Teamsters who work for Yellow Freight, a regional trucking company. Recently, the company threatened to file bankruptcy unless the union agreed to reopen and renegotiate the contract. When the union reluctantly agreed, the company reduced wages by 15 percent, stopped making contributions to the workers’ pension fund, and reduced their health care benefit. “The members are very demoralized now,” Bunker said.

But on Sunday, those in the march were anything but demoralized as the spirited group marched past City Hall, where members of the Occupy Austin movement have set up camp to protest national and local economic and political policies that serve the interests of the richest 1 percent and ignore the interests of the rest of us.

The march ended up at a skyscraper on Congress Avenue that houses Wells Fargo Bank, a bank that received a $43.7 billion bailout from the U.S. government, and since then has recorded $24.6 billion in profits and paid bonuses and compensation totaling $27 billion, including a $14.3 million bonus to CEO John Stumpf. At the same time, the bank has denied 175,336 homeowners facing foreclosure a mortgage modification that would enable them to keep their homes and it pays its bank tellers an average of $22,000 a year.

Pointing to the building where Wells Fargo and other financial companies have their offices, a young electrician belonging to IBEW Local 520 told the crowd, “Labor built this building, but those who own it don’t want to treat labor fairly. When we fight to protect our wages and health care benefits, they call us greedy.”

Occupy Austin labor coordinator Snehal Shingavi, an assistant professor at the University of Texas, said that the most important idea that the labor movement has contributed to the Occupy movement and to the long struggle for social and economic justice is the idea of solidarity. “’An injury to one is an injury to all’ has been the cornerstone of the labor movement; that’s where our power lies and that’s how we can win this fight.”

Other speakers at the rally talked about how workers are paying the price for the economic recession caused by the reckless speculation of banks like Wells Fargo. “The Austin Independent School District eliminated 1,100 jobs of teachers and other education workers,” said Ken Zarifis, co-president of Education Austin, the union representing Austin’s public school employees. The job cuts were caused by cuts to state education funding, the result of declining revenue due to the recession.

“The state has severely reduced services to the people most affected by the recession,” said Jim Branson, lead organizer for the Texas State Employees Union, CWA Local 6186. “It could have raised taxes on the state’s wealthiest to help those in need, but instead chose to cut these services. The wealthy are wealthy because of the wealth created by workers. When those workers fall on hard times, it’s only fair for the rich to share the wealth with those who created it.”

The mood of the marchers was exuberant and angry. They were angry about the economic mess created by a system that puts profit ahead of people’s needs, but they were also happy about the opportunity that the Occupy movement has given them to express their anger and frustration and to build a movement for real change, equality, and social justice. “Thank you for this,” said a middle-aged IBEW member as he waved to the young people at the Occupy Austin encampment outside City Hall.