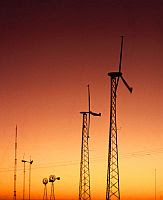 NEW YORK – A new poll by WorldPublicOpinion.org, a global network of research centres, finds that a majority of people in 21 nations support greater use of alternative energies like wind and solar and modifications to make buildings more energy efficient, even if costs more in the short term.

“People perceive that oil is running out and that it is necessary to take steps right away to replace it as a source of energy,” Steven Kull, director of WorldPublicOpinion.org, told IPS. “They really think in the long run.”

An average of 77 percent of respondents thought policy-makers should require utilities to invest more in alternative energy, with country results ranging from 50 percent support in Russia to 89 percent in South Korea.

With an average agreement of 74 percent, almost the same enthusiasm was shown for greater efforts to make buildings more energy efficient. The lowest support, 54 percent, was found in the Palestinian Territories, while an overwhelming 89 percent of French and British want to see stronger commitments by their governments.

In contrast, fewer than half of the nations polled favour more emphasis on nuclear energy, coal or oil to meet energy demands in the future. Only in Kenya, Argentina, Jordan and Nigeria did researchers find more than 50-percent support for building new coal- and oil-fired power plants.

However, the average support for new coal and oil-fired plans lies at 40 percent, while only 33 percent say coal and oil should be deemphasised. With 40 to 30 percent, a question on the construction of new nuclear power plants found very similar results. Still, overall support for alternative energies is much higher.

Confronted with a possible short-run cost increase for greener energy, an average of 69 percent of respondents still thought their governments should take this step.

Asking businesses to use energy more efficiently found an average agreement of 58 percent — compared to 38 percent against it — even if it leads to higher product prices.

An extra charge to buy models of appliances and cars that are not energy efficient also found majority support, with 48 percent in favour to 39 percent against on average.

“It is striking that support for alternative energies and energy efficiency slips only modestly when the cost is highlighted,” Kull commented. “People are definitely willing to do more than they are doing right now.”

In all participating nations, more people share the opinion that the shift towards alternative sources of energy would save money in the long run, resulting in an average support of 66 percent for this position. Only 21 percent expect a lasting economic decline because of the high costs an energy shift may bring.

However, Kull warned against overly high expectations by stressing that “support is not limitless”.

In countries where governments had already taken action against climate change and for energy efficiency — such as Germany and Italy — the number of people willing to pay more for renewable energy was slightly lower than in countries where such measures have not been high on the government’s agenda so far.

Another finding of the poll is that people in oil-exporting countries like Russia, Azerbaijan and Indonesia are more critical of alternative energies than people from oil-importing countries.

As a possible explanation, Kull mentioned that “these countries of course benefit from the use of oil and might be afraid that alternative energies could lead to devaluation of their product.” Besides, “the energy problem is less pressuring” in oil-producing countries, he said.

Some 20,790 respondents from 21 nations were interviewed by researchers participating in the WorldPuplicOpinion.org project between Jul. 15 and Nov. 4. The list of countries included some of the largest nations like China, India, the United States, Indonesia, Nigeria and Russia.

This entry was posted in RagBlog and tagged Alternative Energy, Environment. Bookmark the permalink.