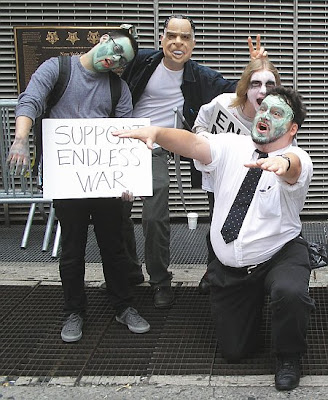 New York, NY – October 19, 2007. Members of MDS New York were joined by students from Pratt, New School and Pace SDS in a street theatre action in NYC’s Times Square. The occasion was the second round of the Iraq Moratorium. Protesters clad as “pro-war zombies” – and the Grim Reaper – turned out on the third Friday in October, 2007 to “help” recruiters. The zombies spoke to passersby, arguing that: “It’s been a long war, business is slow for recruiters and they seem lonely – stop in and say hello.” The zombies worked a two hour shift (union rules?) – exhorting pedestrians to “support endless war”, “give war a chance”, sign up for “only two weekends a month, honest” and to remember that “violence is the answer”. The sarcasm was not lost on three recruiters who came out of their smallish office on “military island” to glare at the ghouls – the zombies agreed that this was the most annoyed they had ever seen the recruiters. Undead Nixon, who made an appearance at the event as well, encouraged the crowd to remember that death and destruction are “underrated” as he gave the hapless recruiters a big thumb’s up.