A 2001 Human Rights Watch report outlined the severe human rights violations of the Mubarak regime between 1992 and 2000. 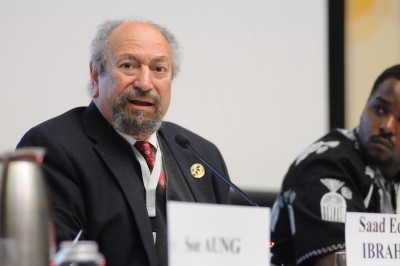 An October 2001 Human Rights Watch background report indicated in the following way the degree to which the U.S. government-backed Mubarak regime had still failed to democratize Egyptian society very much between 1992 and 2000:

…Following a resurgence of political violence in the early 1990s, the government introduced anti-terror laws giving the security and intelligence services greater powers of arrest and detention and rounded up thousands of suspects. While fiercely suppressing opposition political activists, the authorities attempted to gain the support of the country’s conservative religious establishment by delegating to them the authority to censor artistic expression, intellectual debate touching on matters of religion, and social mores.

…Since 1992 hundreds of civilians, mostly alleged members or supporters of al-Gihad (Holy Struggle, known abroad as Egyptian Islamic Jihad), al-Gama’a al-Islamiyya (Islamic Group), or the Muslim Brotherhood, have been referred to military courts. These trials, sometimes held en masse, fail to meet international fair trial standards: basic rights, such as the right to appeal, have been routinely violated, even in cases where the defendants faced and were punished with the death penalty.

These measures have been used widely against Egyptians attempting to exercise peacefully basic political rights… Having crushed much of its Islamist political opposition by the mid-1990s, and with many of the leading figures of such groups in prison or in exile, the government widened its security net, further eroding basic civil rights…

One recent high-profile example was the Supreme State Security Court conviction of sociology professor and democracy advocate Saadeddin Ibrahim… He was sentenced to seven years; five of his associates also received prison terms, and his Ibn Khaldun Center for Development Studies was forcibly closed down. Ibrahim is critical of the Islamists, but has also spoken out about election irregularities, treatment of minorities, and other sensitive topics.

Torture in Egypt is widespread and systematic. Security forces and the police routinely torture or ill-treat detainees, particularly during interrogation. In his January 2001 report to the Commission on Human Rights, the United Nations Special Rapporteur on Torture cited thirty-two cases of death in custody, apparently as a result of torture, occurring between 1997 and 1999. Confessions extracted under torture are commonly used as evidence in political trials and form the basis for convictions….

…Thousands continue to be held in connection with real or suspected membership of banned Islamist groups. Many are held under administrative detention — in other words, without trial — and in some cases have been held for more than ten years. Among them are individuals who were arrested as children in their early teens and who remain incarcerated as adults. Others were kept in prison though their sentences had expired. Others were never released even though acquitted in court, such as Abd al-Mun’im Gamal al-Din Abd al-Mun’im, a freelance journalist with the bi-weekly newspaper al-Sha’b. He has remained in detention since 1993 even though he was acquitted twice (in 1993 and 1999) of all charges by military courts….

The 1992 Anti-Terror Law also criminalized non-violent political opposition, and was used to arrest and bring to trial persons not accused of committing or advocating violence but simply of alleged affiliation with the Muslim Brotherhood. Since 1995, over one hundred defendants were tried and dozens sentenced to terms of up to five years after being convicted of membership in an illegal organization.

In 1999 the government arrested and tried twenty alleged Muslim Brothers, mostly lawyers, university professors and other professionals, accused of membership of an illegal organization and attempting to control the activities of professional associations. The prosecutions appeared to be an attempt by the authorities to prevent the defendants from running as independent candidates in parliamentary elections and for the boards of their respective professional associations. In November 2000, the Supreme Military Court sentenced fifteen of the defendants to prison terms ranging between three and five years, and acquitted the rest.

The government has also targeted other Islamist opposition groups seeking to exercise their political rights peacefully. In May 2000 the Political Affairs Committee, a government body responsible for licensing and monitoring political parties, froze the activities of the legal Islamist opposition Labour Party… In a separate case in April 2000, four leading Labour Party figures were imprisoned after being convicted for slandering a government minister.

As part of its efforts to stifle free political participation, the government strictly limits the number of licensed political parties. Since 1996, for example, Muslim Brotherhood affiliates who formed a group known as al-Wasat (The Center) have repeatedly applied to register as a political party but without success…. As an added measure to ensure a comfortable victory for the ruling National Democratic Party in these elections, the government routinely arrests opposition candidates and their supporters in the run-up to elections.

The primary target has been the Muslim Brotherhood, hundreds of whose members and supporters were rounded up and held in administrative detention ahead of and during the October-November 2000 parliamentary elections in what has become a regular feature of Egyptian democracy. The pattern repeated itself in the run-up to the mid-term Majlis al-Shura (Consultative Council, the upper house of the parliament) elections held in May and June 2001, when at least 140 persons suspected of belonging to the Muslim Brotherhood were arrested for days or weeks, including several candidates running as independents.

Emergency legislation prohibits strikes, public meetings, and election rallies. The government has taken arbitrary measures to stifle the voices of trade union activists who have been outspoken around issues such as worker safety in the state sector. In some cases the authorities issued threats to persuade activists to withdraw their candidacy in union elections. In October 2000 Fathi al-Masri, a board member of Center for Trade Union and Workers Services (CTUWS), an independent NGO, was detained for a month on charges of `disturbing public order’ after he distributed leaflets criticizing medical services at a state-owned company. In September 2001 two other CTUWS board members, including its director, Kamal Abbas, were questioned by prosecutors regarding “unwarranted” criticisms of working conditions at another company.

The government controls the electronic media and on occasion has shut down newspapers and periodicals that cross red lines. The Press Law of 1996 provides jail terms for offences such as defamation, insult or libel. The government has gone out of its way to appease Islamist sentiment in the country by implementing and encouraging measures that in practice violate of freedom of expression. These include banning novels considered to be sexually explicit or denigrating to Islam, and prosecuting writers whose views are deemed blasphemous.

In effect, the government has compensated for its repression of Islamists in the political sphere by allowing the conservative religious establishment, such as the leading figures in Al-Azhar University, to exercise a high degree of control over cultural expression and social mores.

…According to information compiled by the non-governmental Egyptian Organization for Human Rights (EOHR), 1,357 people were killed in acts of political violence in Egypt between 1992 and 1998…. The government’s campaign against those suspected of involvement in acts of political violence has been characterized by widespread arbitrary arrests, grossly unfair trials, torture, and executions…

More than a thousand defendants were tried before military courts in thirty-two separate cases between 1992 and 1998, according to the EOHR. Of these, 479 were alleged members of al-Gihad, of whom thirty-seven were executed, 277 imprisoned, and 165 acquitted. Others included 383 alleged members of al-Gama’a al-Islamiyya; fifty-one of them were executed, 247 imprisoned, and eighty-five acquitted. None had the right to appeal their sentences before a higher tribunal, a fair trial requirement, and none of the officials they accused of having tortured them were ever brought to justice.

The last major military trial of this kind was held between February and April 1999, involving 107 defendants, 60 in absentia. Most were charged with membership of an illegal organization (al-Gihad), as well as other charges including conspiracy to commit murder, weapons possession, and forging official documents… The Supreme Military Court sentenced nine to death… Seventy-eight were sent to prison and twenty were acquitted. As in previous cases, a number of defendants stated in court that they had been tortured….

Yet despite the undemocratic Mubarak regime’s record of continuing to violate the human rights of large numbers of people in Egypt between 1992 and 2000, the same Human Rights Watch background report of October 2001 also noted:

…For more than two decades Egypt has been one of the largest recipients of U.S. economic and military aid, second only to Israel. For fiscal year 2002 the Bush Administration has requested $ 1.3 billion in Foreign Military Financing funds, $ 655 million in Economic Support Fund assistance, and $1.2 million for training of Egyptian military officers….