Afghanistan : Get Out Before It’s Too Late 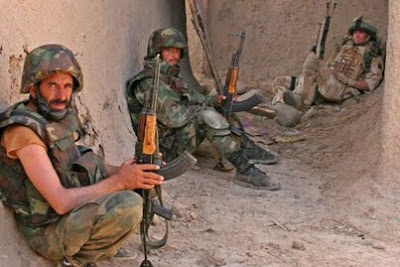 …the United States and its NATO allies [have] slipped deeper and deeper into the Afghanistan quagmire with the same historical ignorance that characterized American lack of awareness of Vietnamese history.

We are approaching a time when critical decisions will be made on Afghanistan; whether the U.S. government will expand the war for years, sucking us into a quagmire of unimaginable proportions, or disengage, increasing the possibility of investing in health care reform, modest responses to the danger of climate change, and jobs and justice for workers.

Forty-five years ago, as President Johnson was signing the Voting Rights Act of 1965 and launching the Great Society programs to lift “the other America” out of poverty he was making apocryphal decisions to send thousands of young men to fight and die in Vietnam (and to kill some three million Vietnamese people).

With growing Vietnamese resistance to the U.S. war effort, the U.S. military turned to massacring villagers, assassinating suspected enemies, and carpet bombing and napalming. The hopes and dreams of a better America were burned to a crisp in the jungles of Vietnam.

As many have written in print and cyberspace, the war in Afghanistan must come to an end. Francis Boyle, an international lawyer and professor, wrote in 2002 that the United States should never have made war on Afghanistan. The tragedy of 9/11 was an act of terrorism, not an act of war launched by Afghanistan.

“An act of war is a military attack by one state against another state. There is so far no evidence produced that the state of Afghanistan, at the time, either attacked the United States or authorized or approved such an attack.”

Nothing ever since justifies the war the United States initiated in Afghanistan in October, 2001.

In the subsequent years, the United States and its NATO allies slipped deeper and deeper into the Afghanistan quagmire with the same historical ignorance that characterized American lack of awareness of Vietnamese history. As Marc Pilisuk, social psychologist, reminds us about Vietnam,

“Fear of admitting we were wrong led to one new tactic after another. With military efforts bogged down in unfriendly jungle areas, we resorted to the use of toxic herbicides and ‘open target area bombing,’ burning villages, torturing peasants for information, propping up a succession of puppet governments… Efforts to ‘win the minds and hearts’ of people were undermined by military violence and a nearly universal wish to get the U.S. troops out of their country.”

Pilisuk then elaborates on the complex history of Afghanistan; which includes defeating invading imperial armies, internal tribal conflicts, U.S. support for those now seen as terrorists in the 1980s war against the pro-Soviet regime in Kabul, and shocking underdevelopment. He compellingly argues that: “Planning to remake Afghanistan in the back offices of the Pentagon is to repeat the neglect of cultural and historical factors in Vietnam.”

What to do now? Tom Hayden initiated a petition campaign in September, 2009, securing signatures of those who demand an end to the war in Afghanistan. In it he proposes an exit strategy that makes sense:

As these scholar/activists correctly state: the United States should never have made war on Afghanistan and the eight year war reflects the same ignorance of the history the U.S. displayed in Vietnam. As the Hayden petition argues, the Obama administration must embark on a diplomatic effort to bring together contending political forces in Afghanistan with the assistance of interested governments in Asia and the Persian Gulf.

The only solution to the war in Afghanistan is the withdrawal of United States troops from that country. Adopting the recommendations of Generals McChrystal and Petraeus for more troops is a blueprint for disaster.

14 Responses to Afghanistan : Get Out Before It’s Too Late