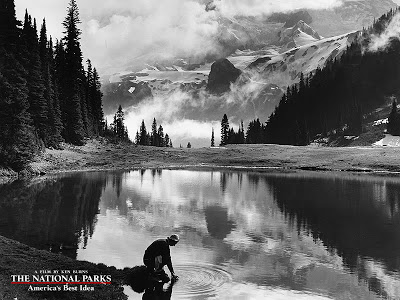 Ken Burns’ “The National Parks: Our Best Idea.” Real health care reform is isn’t such a bad idea, either.
Taking refuge in PBS’ series on our public parks
While the Kabuki dance in Washington continues

Fatigued and battered by the dishonesty inherent in the health care debate, I gave way to fatigue and disenchantment with the U.S. political establishment and for the past week have been enthralled by the aesthetics and historical narrative of Ken Burns’ PBS series on the public parks in our country. Many of these I have never seen, and will never see firsthand, so I was pleased to have the opportunity to experience the overwhelming beauty and diversity of these magnificent areas of peace and tranquility via PBS.

Throughout I gave thanks to the many folks behind the preservation of these gifts to the nation, like John Muir, Theodore Roosevelt, Franklin D. Roosevelt, Harold Ickes, and many many more. While watching this terrific series, I was impressed with this nation’s greatest experiment in socialism, the government at work for the benefit of the people, fiercely opposing those who would commercialize these lands, destroying the beauty, cutting the trees, mining for minerals, obliterating the wildlife, and in essence continuing the American dream of making money at all cost to the environment and the human habitation of the lands.

Unfortunately, the Kabuki dance in Washington continues. The Senate Finance Committee, under the guidance of its chairman, well financed to the tune of nearly three million dollars from the health insurance lobbies, has finally passed a bill which will move along the discussion of “health care” (or, more to the point, “insurance reform”).

Dr. Quentin Young, national coordinator for Physicians for a National Health Program, has noted that the author for the bill for the committee was one Liz Fowler, a former VP at WellPoint, the nation’s largest health insurer. This factunderlines the need to back up, start over, and let Congress reconsider the matter of the single payer Medicare for All alternative which, above all, would eliminate the need for private insurance companies, and most likely save the nation over $400 billion annually, enough to cover the 47 million uninsured.

The public option has become essentially a farce, meaning different things to different people. In its pure form it would be a public insurance company to compete on an even footing with the various insurance companies involved in the health insurance cartel; however, each congressman and senator appears to have a differing view of what the plan might entail, including “triggers,” “cooperatives,” and various modifications that could make the whole concept meaningless.

White House leadership has been intermittent and half-hearted. The President never made a pitch for a true single payer plan, administered by a public insurance company, overseen by a non-political government agency. Instead, according to reliable sourced, the insurance executives have had an open door at the White House, while President Obama has reached a private deal with the pharmaceutical companies to “control prices” over the next ten years.

At no point has the medical profession been a big player in the health care debate despite the fact that a poll shows 73% of physicians approving a change in the present system. I grant that the AMA has been consulted, but I am sure that Mr. Obama is aware that this is smoke and mirrors, that the AMA is a political lobby and not representative of the desires or wishes of the vast majority of American physicians.

We will see if the White House shows any degree of cordiality to the caravan of “Mad as Hell” doctors on their way to Washington from the State of Oregon. We will see if finally the physicians are as welcome at the White House as are the executives of the insurance and pharmaceutical industries.

If there is not a move to single payer, or at least a true public option, we will be left with negotiating with the insurance cartel to revise their current practices — requiring them to take in those with pre-existing illnesses, forbidding disallowance of legitimate claims –- and in return mandating by fiat that all Americans buy insurance with a government subsidy.

This would put the insurance industry in control with a windfall of almost one trillion dollars of public tax money to subsidize reform. Not only that but one can anticipate further collusion and deceit on the part of the industry. Why should they change their modus operandi? One could imagine, for instance, a company agreeing to insure a person with a “pre-existing” condition such as diabetes while, in the fine print, care for diabetic kidney disease, cardiovascular disease associated with diabetes, or diabetic eye disease would be disallowed.

A right of appeal to an overburdened government oversight official would no doubt be available, but one can imagine that this would take months to implement. Yet, this is what the Republicans and Blue Dog Democrats appear to want. I must say that I am pleased and proud of our member of congress in Pennsylvania, a registered Blue Dog, who has courageously come out in support of the public option, and even included Wendell Potter in her town meetings.

Private insurance, as national health insurance, has worked in the Netherlands, and in Switzerland. Jonathan Cohn has an excellent article in the September 29 New Republic, entitled “Going Dutch.” Mr. Cohn points out:

“There is a catch, A big catch. Private insurance in the Netherlands works because it operates more or less like a public utility. The Dutch government regulates industry prices tightly — more tightly than the reforms now moving through Congress propose to do in the United States.”

“The new system came on line in 2006 and, so far, the results are encouraging. Everyone picks an insurance carrier once a year, more or less the same way employees of large companies do here in the United States, during annual open enrollment periods. By law, the coverage is generous, no matter which carrier someone chooses, Plans cover all medically necessary services — as defined by the government, in consultation with independent experts and medical societies — and they pay for all but a tiny fraction of the bills. The government provides income-based subsidies, and roughly two-thirds of the population gets some assistance.”

The pending legislation brings to mind George Washington’s remark: “Few men have virtue to withstand the highest bidder.” Such is the current climate in Washington, D.C. These legions of insurance company prostitutes are at their worst when they go about frightening the elderly and uninformed with their Medicare scare mongering.

The New York Times of September 27 pointed this out in an editorial which notes:

“It has been frustrating to watch Republican leaders posture as the vigilant protectors of Medicare against health reforms designated to make the system better and more equitable. This is the same party that in the past tried to pare back Medicare and has repeatedly denounced the kind of single-payer system that is at the heart of Mediicare and its popularity.”

I recently heard a local Rabbi recounting the story of how he and his wife spent a year in Jerusalem 16 years ago. Upon arrival, they purchased government health insurance for the year. The Rabbi’s wife had an accident in which she broke her wrist in five places, sprained her right arm, bruised some ribs, and scratched up her face. She was taken by ambulance to the hospital, seen by five doctors, x-rayed, and a cast was applied to her arm. She had follow-up visits including x-rays and a CT scan. All this was covered by the medical insurance which had been purchased for the year for $322.

In discussing the public unrest, the “tea bag” rallies, the disruptions of congressional town meetings by hate groups, young and old, and the frequently-voiced disdain for “government programs” in general, one wonders why these folks should not be provided with a choice. If indeed they are past age 65 and dislike Medicare and Social Security, let us be reasonable and provide them with the opportunity to opt out of the programs.

If they are under the age of 65 and hateful of government programs let us provide them the right to discontinue payment of their payroll taxes and thereby forego the option at the age of 65 of receiving social security and Medicare. And, as for these folks who totally despise President Obama, let us call to their attention that he agrees with them totally about not prosecuting Bush administration war criminals, is on board with them on not regulating the failed financial institutions of Wall Street, favors the Republican policy of American Empire, agrees that we should continue electronic surveillance of the American public, and has shown no leadership in ending the absurd “war on drugs.”

I would further suggest that all progressives pay homage to Representative Grayson of Florida who has shown the courage and conscience to speak up unequivocally for universal health care and at the same time face down the purveyors of hate and fear. Progressives should also heed Jeff Sharlet’s warnings in his book “The Family.” It seems to me that we are being completely out-maneuvered in Washington by The Fellowship’s Doug Coe and his followers.

I am encouraged by the move for a viable single payer plan within the Commonwealth of Pennsylvania where I live. Bill 1660 is now before the State Legislature and bill 400 before The Senate. The Governor has indicated that he will sign the bill if passed. This bill would decrease dramatically the costs of health care to municipalities, school districts, and employers. Of course, we face the same corporate lobbying that exists at the national level; hence, the test locally must be whether elected officials work for their constituents or for the insurance companies.

This old curmudgeon will by 88 years of age this month. I am very grateful to the United States government for providing me with Medicare and Social Security since my retirement at age 70. There has been no disruption or mismanagement of these “socialistic” programs. I have no complaints with either program, and I’m sure I have put a strain on Medicare with my malignancy and neuropathy.

I am grateful, as well, for my friends from academia that I have become associated with since my wife’s death. Their support can never be fully calculated or rewarded. My new associates at The Rag Blog in Austin have been invaluable in sustaining my morale and encouraging me to revisit the progressive causes of my youth.

Finally, my thanks to my closest support, the widow of a physician contemporary, who is an intellectual and a grand Lady (note the capital “L”), who must put up with my every day ranting and periods of disenchantment with our society, and my disillusionment with the state of medical care since the insurance industry has morphed it from a fine profession into a business.

6 Responses to Health Care Reform and our Socialist National Parks