The economic philosophy of violence & the cultural/historical development of violence in the U.S. 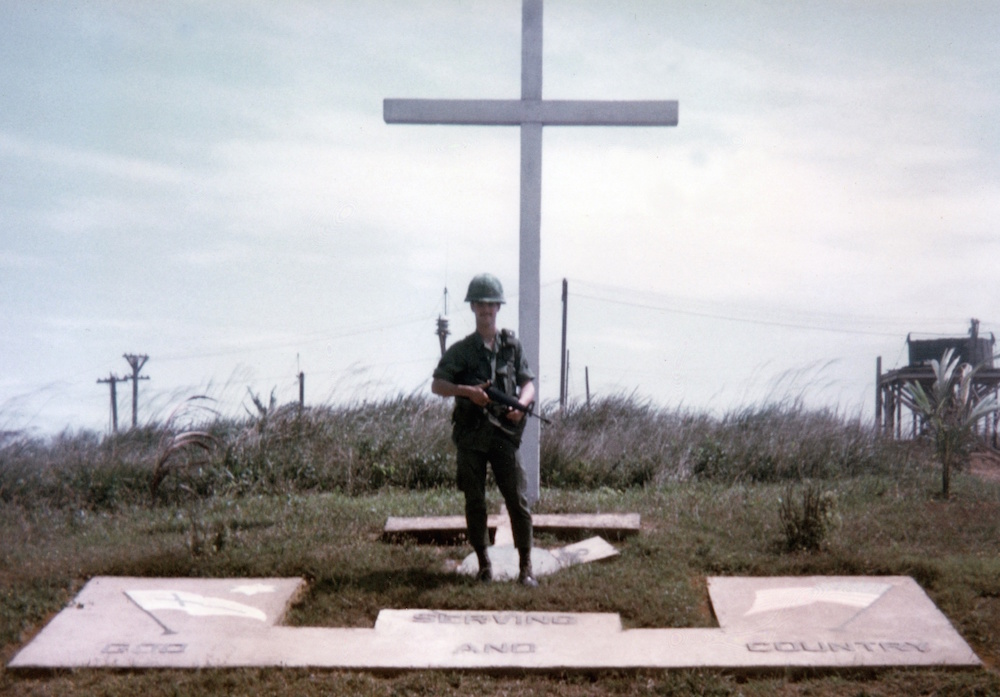 The Cross and the M-16. “In 1968, on the Army base in Chu Lai while I was still a chaplain’s assistant. By this time I knew I was in an Imperialist Army of Occupation so I set this photo up and had a fellow soldier take the picture.”

Alan Pogue and Lamar W. Hankins will be Thorne Dreyer‘s guests on the syndicated Rag Radio show, Friday, April 13, 2018, first airing from 2-3 p.m. (CT) on KOOP 91.7-FM in Austin, and streamed live: http://www.koop.org/listen-now. They will discuss Pogue’s article, below, and Hankins’ recent Rag Blog article, “Arguing about the Second Amendment is a waste of time” — and their somewhat divergent views on gun violence and gun control.

[Noted documentary photographer Alan Pogue is a fifth generation Texan. His ancestors came to the Texas coast, to McKinney’s Trading Post, from Dublin, Ireland, in 1840. The trading post later became Corpus Christi. He attended Catholic schools and was an altar boy for 13 years.

Alan has worked with peace and justice organizations in Austin and around the world since he returned from Vietnam in 1968 where he was a chaplain’s assistant and a combat medic. He is a Texas Department of Public Safety certified instructor for the License to Carry. He has saved several people from rape and murder on the streets of Austin. Once a combat medic, always a combat medic. See Alan’s Rag Blog article, “My history with violence.”] 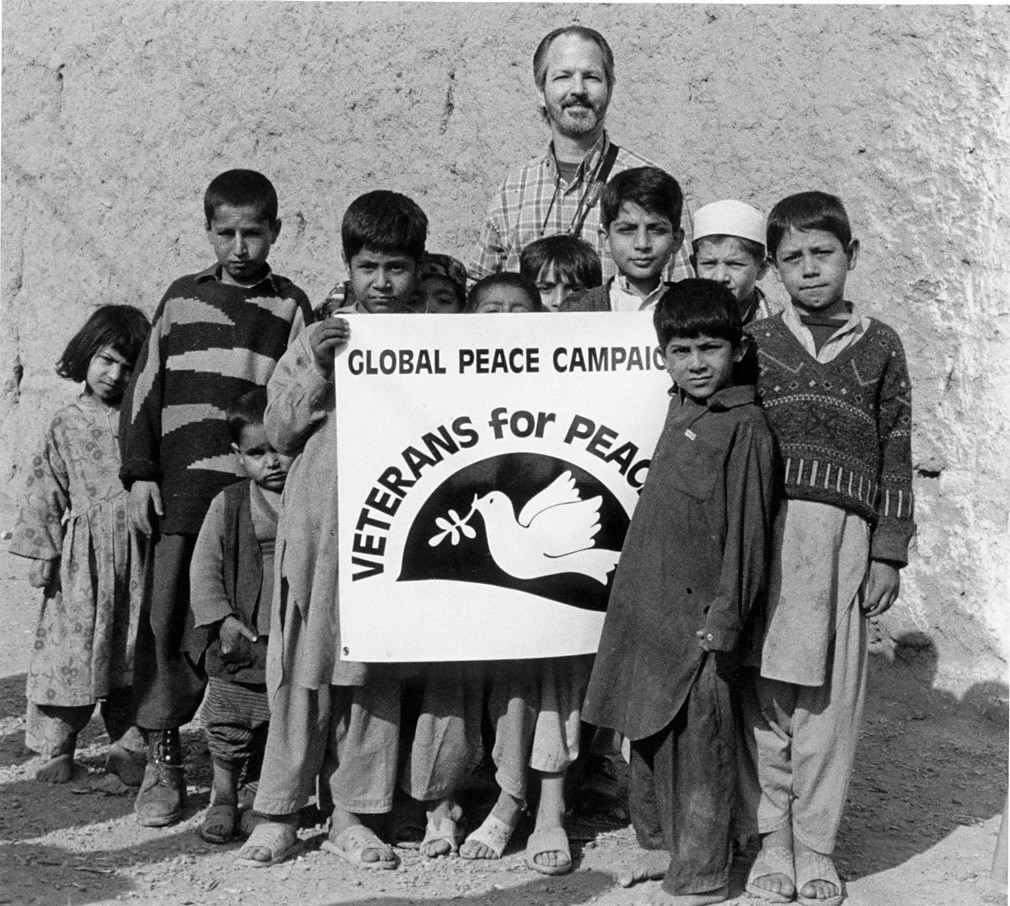 In 2002 on Vieques Island. “During many days of protest against the U.S., using the island as a bombing target. I am in the center and Pepo Belardo is on my right, and Angel Navarro is on my left. Both are Korean War vets and members of Veterans for Peace, as am I.”

Here the genocide of native people and slavery is taken for granted by the children of the colonizers and slave owners. Not that most European-Americans are consciously for slavery but that they do not understand that slavery is integral to the U.S. economic enterprise and is ongoing. This leaves no basis for critiquing our terrifically horrendous foreign policy.

When domestic violence occurs few people are willing and able to say these are instances of a highly approved economic-political philosophy of violence. No one should be surprised by the logical consequences of a premise. A problem is that the premise cannot be acknowledged, be articulated, by those hypnotized by American Exceptionalism.

The Pilgrim/Puritan genocide- and slavery-as-salvation brought by the chosen of God, the self delusion of Manifest Destiny, which was a necessary psychological cover for our “mass shooting,” is a mass psychosis.

The corporate press likes to call our present comparatively small incidents of homicide “ mass shootings,” small in relation to real mass shootings/bombings/poisonings in the thousands and tens of thousands by our military around the world. Thinking of Yemen and Gaza at the moment.

People here are unable to assimilate the information which bombards them. They have no analytical structure. There is no mystery why not. The major media work for the major corporations which profit from war. 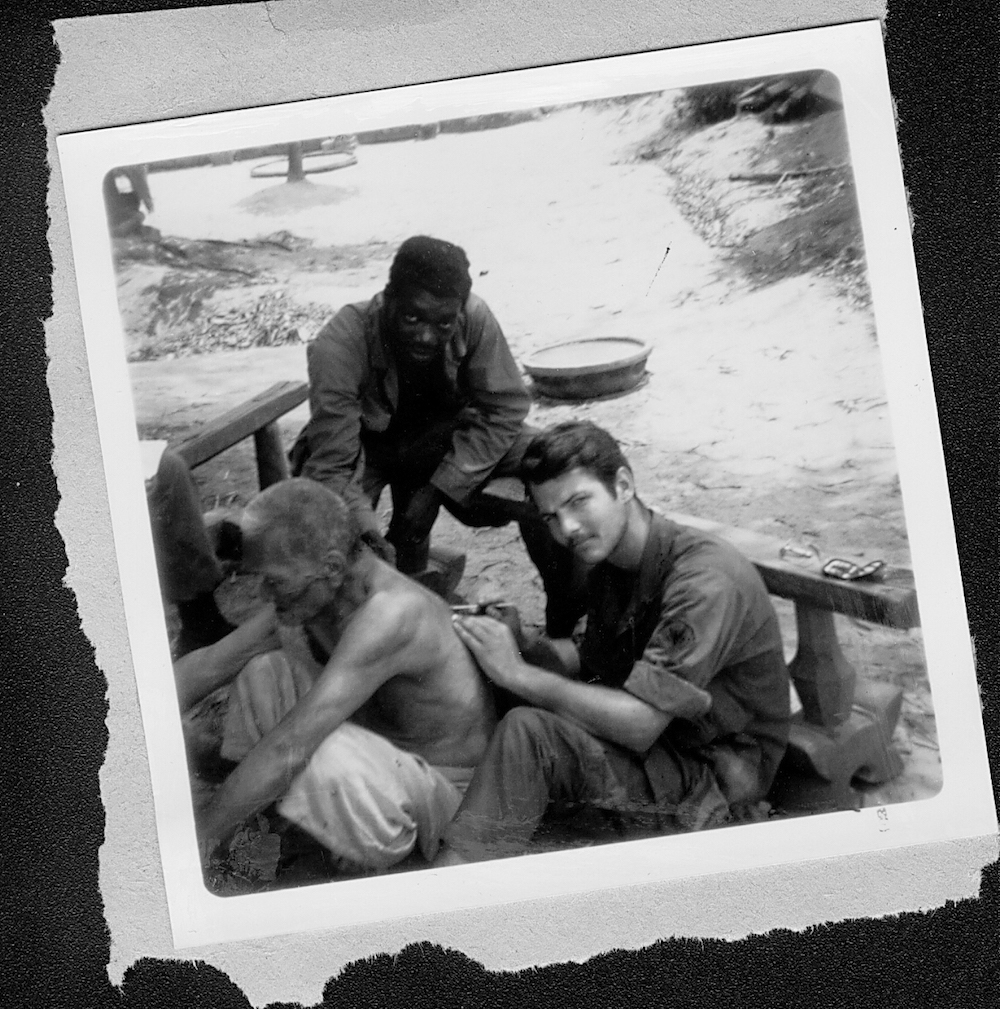 Near Chu Lai, Vietnam, 1968. “I often worked on Vietnamese when I could. The old man had a series of boils on his back. I worked on them for two days.”

When I mention that Hillary Clinton helped murder Berta Caceres,in Honduras, I get blank stares and then I explain and give places to go on the web for an even fuller explanation if they wish to have it. Often the reality of state-sanctioned mass murder and political assassination is more than they can bear to grasp. They cannot say, “We, as a culture, are the authors of our own circumstances.”

Those people in our society who act out violently are only following the example set at the highest levels of government. So we swallow the camel of killer drones, cluster bombs, napalm, and nuclear weapons but we balk at the AR-15 rifle which only looks like a military weapon while it is not a military weapon.

Worrying about “military style” weapons is like rearranging the deck chairs on the Titanic. The reasons for our sinking will be left unexamined. Those that brought us to this point will not be leading us to safety. They cannot point the finger of causation at themselves. Instead we are led to worry about the “Russian Hack” and the AR-15 civilian rifle.

[Alan Pogue, now an acclaimed international documentary photographer who specializes in issues of social justice, was a chaplain and then a front-line medic in Vietnam with the 198th Light Infantry Brigade. He returned stateside a committed activist, heavily involved in the burgeoning anti-war movement in Austin, working with SDS and Veterans for Peace — and as staff photographer for Austin’s underground newspaper, The Rag. Alan, the author of Witness for Justice (University of Texas Press) lives in Austin where he works through his Texas Center for Documentary Photography.]