Alan Waldman :
FILM | Michael Moore’s ‘Where to Invade Next’ is the best film of the young 21st century! 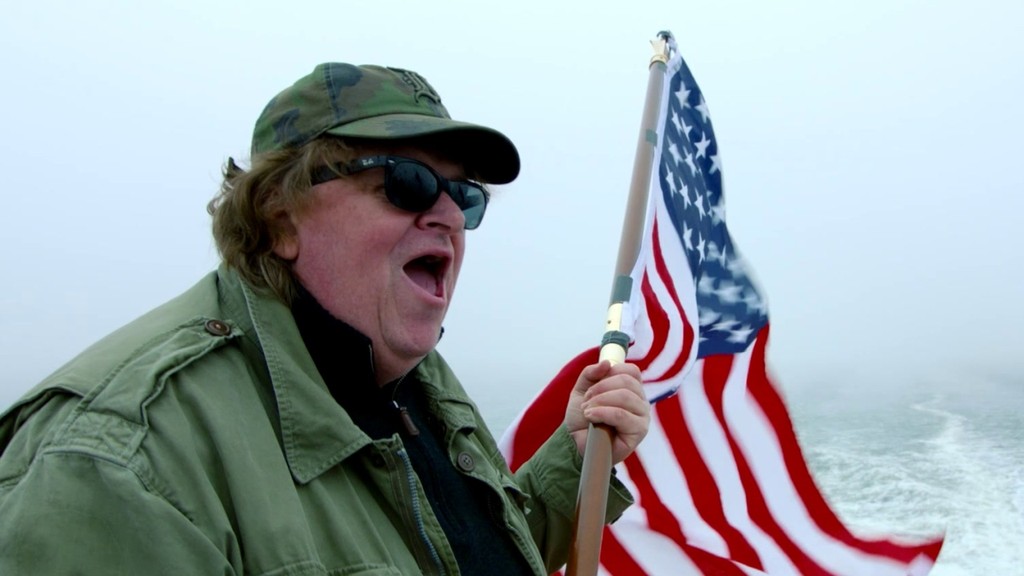 Michael Moore: Where to Invade Next.

I loved the Oscar-winning documentary What Happened, Miss Simone?, but I consider Michael Moore’s finest movie yet, Where to Invade Next, the best film of the decade — hell, the best film of the 21st Century so far! It’s funny, compassionate, brilliant, and bursting with vital ideas — and for people who find Moore a tad strident, it is much funnier and gentler than his earlier works (except Canadian Bacon, in which he suggests we go to war with Canada because we can actually defeat them).

In its first 10 weeks on U. S. screens, as of April 17, 2016, Where to Invade Next had a domestic box-office of $3,801,054 and at its widest reached only 308 theaters. That’s tragic, considering that Moore’s anti Iraq-war classic Fahrenheit 9/11 was the largest-grossing documentary in the world to date, with $222.5 million — which rose to about half a billion smackers with subsequent release in 40 more lands.

On April 17, our film was still on 23 U.S. screens and playing in Australia, Canada, and nine European nations. It’s due later this year in Singapore, Italy, U.K., Japan, France and Russia

But here’s the great news for those of you who have missed it: IT COMES TO NETFLIX AND DVD (wherever you can find that) on May 10!

In the film, Moore tried to mollify the Joint Chiefs of Staff who are frustrated because the U.S hasn’t “won” a war since we vaporized Hiroshima and Nagasaki, so he stages mock “invasions’’ of various European and North African republics. There he feigns astonishment to discover that ordinary citizens are treated so much better than we are in the home of “American exceptionalism.”

In this expansive and subversive comedy Moore tries to learn how the U.S. could improve its own prospects. Turns out most of these terrific techniques that other countries have adopted to improve work, school, prison, healthcare, and other aspects of European life were originally American ideas — only those countries went ahead and implemented them — and benefited greatly thereby — while we didn’t.

First Michael Moore visits a working-class Italian couple who live like Kardashians with eight paid weeks of vacation. When he tells them many Americans are lucky to get two, the wife gasps, “A year?!” Italy is portrayed as a worker’s paradise of two-hour lunch breaks and five-month paid maternity leave. Italians are also reported to be happier than Yanks because they have more sex. Moore asks an Italian CEO why she shares her wealth, and she insists that she doesn’t want to be richer at the cost of her employees’ happiness. 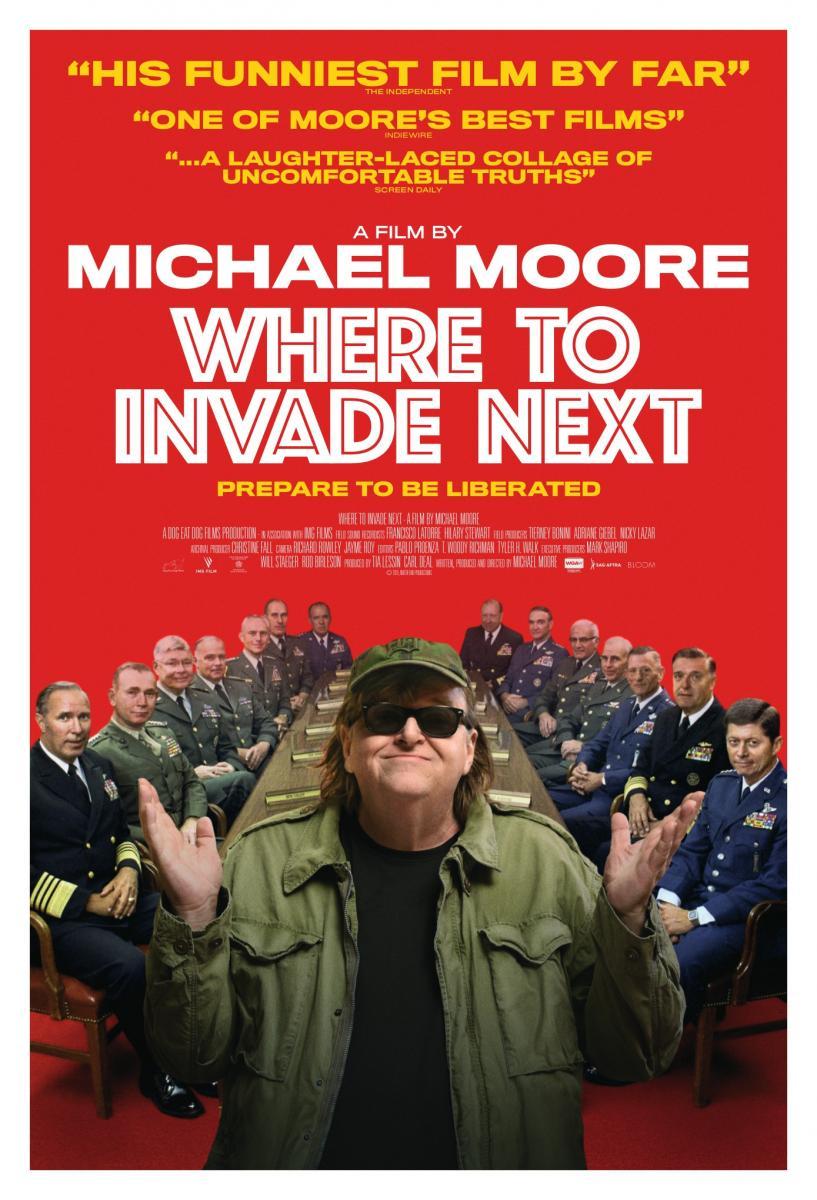 Moore meets a chef who prepares healthy, multi-course, served-to-the-table gourmet meals for elementary school students in one of the poorest villages in France. He stocks 80 types of cheese. The enfants at Moore’s table were terrified of his photos of the slop of U.S. school lunches and were uninterested in sharing his Coke.

In Finland, whose students are among the world’s best educated, he learns that little to no homework is assigned, standardized testing is a rarity, and education is based on learning an array of skills with the emphasis on the growth of the whole person.

In Slovenia, he discovers that college education is not only free but also available to foreign students (though they pay small registration fees to the colleges). One hundred courses are taught in English — so foreign and domestic students are not enslaved by massive college debt. About 20 Euro countries have free college.

At around this point, Where to Invade Next becomes more serious and its critical attitude sharpens. Mr. Moore believes that every country has its own original sin, which in the case of Germany would be the Holocaust. In atonement, along with concerted efforts at remembrance, Germans are continually reminded of the country’s Nazi horrors in monuments, landmarks, and public art. Moore suggests Americans might put up reminders of oppression of Native Americans, Blacks, Latinos, Japanese, Latinos, Gays, and others.

Germany is portrayed as another worker’s paradise, in which employees by law hold half the seats on corporate boards of directors, and CEOs tell Moore that greed isn’t good for anybody. In Germany, the workers in a thriving pencil factory are sent to a spa when they feel overstressed.

The film becomes almost giddily optimistic once Moore visits Norway to investigate that country’s prisons and learns that the maximum sentence is 21 years. Even convicted murderers are housed in the equivalent of small Manhattan studio apartments equipped with televisions and cookware, even sharp utensils. No one is locked in solitary confinement, prisoners have a lot of mobility and the principal punishment is separation from the rest of society. The purpose of prison is rehabilitation, not punishment, and prisoners have keys to their cells. Norway’s recidivism rate is 20%; ours is 82%.

In Portugal, Michael finds out that unlike most of the world, where over half of prisoners are in for drug crimes, drugs have been legal for 15 years — so there is no drug crime. Moore tells a cop. “I have cocaine in my pocket, Lots of it,” and the cop shrugs and then tells him how immoral the American death penalty is.

In Iceland (population around 320,000), the recent global financial crisis gutted the economy, but the mending of the domestic banking system was aided by debt restructuring and women leaders jailing 70 crooked bankers. The key to the country’s resilience and stability, Moore concludes, is its strong female leadership (under it’s first-ever woman head of state).

Next is a ringing endorsement of women’s rights and female governmental leadership from Tunisia (whose conservative Islamic voters enacted the kind of equal rights amendment to its constitution that failed in the U.S.).

The film ends with Michael and one of the guys who tore down the Berlin Wall walking along a small standing section of that fallen structure. Moore is optimistic. He notes that the wall came down in only three days and that in the U.S. marriage equality went from illegal to legal in only three years. “It just proves that we can change things, if we make our minds up to.”

At Rottentomatoes.com, 77% of 132 critics gave Where to Invade Next thumbs up. Toronto Star’s Peter Howell wrote: “[Moore has] made his most enjoyable film in years and also his most inspiring, the antidote to prevailing global doom and gloom.”

Stephen Holden, The New York Times: “Watching it made me feel like a deprived child with my nose pressed against the glass of a magical toy store in a faraway land. On one side is a happy, harmonious land of productive people. On the other is a world of misery, anxiety, war and greed.”

Colin Calver, Minneapolis Star Tribune, “Where to Invade Next isn’t only a love letter to European successes; it’s a cheer-up note to Fortress America, too.”

Sophia A. McClennen, Salon: “Provocative, hilariously funny… Moore’s latest film is his most bold and his most sophisticated. Instead of pointing out our flaws, he imagines our possibilities. And instead of wallowing in fear and panic, he offers practical ideas for productive change.”

Owen Gleiberman, BBC: “Moore has made an act of guerrilla humanity.”

Michael Moore won the 2003 best documentary Oscar for writing, directing, and producing Bowling for Columbine. He was nominated in 2008 for his great medical doc Sicko. He has earned 44 awards and 27 other nominations for TV Nation, The Awful Truth, The Big One, Roger & Me, Fahrenheit 9/11, and Pets or Meat: The Return to Flint, plus winning the Freedom of Speech Award at the 2003 U.S. Comedy Arts Festival. His book Stupid White Men …and Other Sorry Excuses for the State of the Nation reached #1 on the New York Times non-fiction list.

Michael Moore raised money for the production of his first film, Roger & Me, by running neighborhood bingo games in his house. He is a card-carrying member of the National Rifle Association and once told Tim Russert that he joined so as to be elected its president and then dismantle the organization.

After the box office failure of his 1995 comedy Canadian Bacon, a very depressed Moore briefly contemplated early retirement. On the day after his infamous “Oscar Backlash,” where he attacked both George W. Bush and the Iraq war, attendance for his movie Bowling for Columbine went up 110%.

I once did a telephone interview with Michael Moore when he was due to speak at a Cable TV convention in New Orleans. He was bright, fun, easygoing, and genial, and we had a pleasant little political discussion too. A week later I phoned his office and told his assistant I needed to speak to him for a moment because I had “doctored” one of his quotes (for space reasons) and needed his approval. She told him and then relayed his answer to me: “He says ‘It’s OK. You’re a good guy and he trusts you.”

Well. I guess that’s going on my tombstone, along with my wife’s paean: “All men are shits. You’re the best man in the world, but that’s still not saying much.”