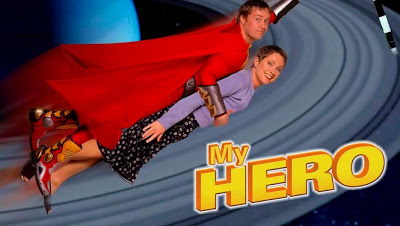 Two of the very, very funniest characters in British TV comedies of the past quarter-century were Ardal O’Hanlon as Father Dougal in Father Ted and James Dreyfus as Officer Goody in The Thin Blue Line. I have reviewed both of these side-splitting series in previous Rag Blog columns and have recommended them most enthusiastically, as I do their highly amusing 2000-2006 series My Hero.

In the first five My Hero seasons, O’Hanlon (replaced by Dreyfus in the sixth) plays the costumed superhero Thermoman from the planet Ultron who flies around the earth putting out volcanoes and repairing other disasters.

Assuming the Earth body of health-food-store owner George Sunday, he marries local girl Janet Dawkins and struggles to fit into society in the fictional English town of Northolt, but his unfamiliarity with human life leads to many humorous misunderstandings.

The series was very popular for its first 43 episodes, but after the beloved O’Hanlon left, the audience halved for the final eight — although I just watched these Dreyfus episodes on YouTube and found them very funny. To help you judge the two performances, here is an O’Hanlon episode from early in season one, and here is a great one from the final season where Dreyfus pretends to be a cat.

The actor change is explained thusly: George lost his Earth body in a poker game and it was replaced by Dreyfus’s.

Several of the big joys of My Hero come from the nutty supporting characters. Geraldine McNulty is priceless as sadistic, miserable, supremely unattractive medical receptionist Mrs. Raven, who eventually gets into a wonderfully warped relationship with Ultron exile and Brooklyn Restaurateur Arnie (Lou Hirsch).

The series has a lot of fun with special effects, usually illustrating Thermoman’s powers. Late in the series, George and Janet have two children who can speak from birth, and their superpowers are also conveyed via special effects.

Unlike most Britcoms, where all episodes are penned by the original writer, My Hero takes the American approach of using a team of writers. One of the lead scribes is Paul Mayhew Archer, who was one of the two genius creators of the sublime Britcom The Vicar of Dibley.

The first two seasons of My Hero are on Netflix, and all 51 episodes can be enjoyed on YouTube.