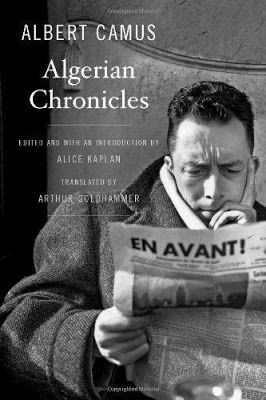 These writings do much toward describing the plight of the Algerian people, but suffer from an inability to acknowledge, much less examine, the root cause for their situation.

Albert Camus is arguably one of the greatest writers of the twentieth century. His relatively short life is well chronicled and the fodder for multiple conversations in university literature classes. His novels and essays raise fundamental questions about life in a world where life can easily be seen to mean absolutely nothing.

Like Jean Paul Sartre — another writer with whom Camus is often compared and contrasted — Camus’ search for meaning in a world rendered meaningless strikes a chord in every human, especially those who do not seek easy answers. The conclusion these men reached was that it is up to us to provide our own meaning.

It has always been a curiosity, then, why Camus had such a difficult time understanding the desire of the Algerians to create a meaning to their lives that required overthrowing the French colonialists. His understanding that human freedom was perhaps the greatest quality humanity possessed seemed to stop short of recognizing the denial of that freedom under colonialism.

This shortsightedness led Camus to justify situations in a manner that remind this reviewer of Rube Goldberg’s inventions, only without the result desired. In other words, explanations full of loops and turns but without even the conclusive ending Goldberg’s inventions achieved.

So, it was with just such a hope for clarification that I picked up Camus’ recently published (in English) Algerian Chronicles. Perhaps these writings would reveal some clarity to his position not found previously. Unfortunately, I was disappointed. While Camus certainly goes further in explaining his position (or perhaps lack of a position would be a better phrasing) regarding the situation of the French vis-a-vis their occupation of Algeria, that position is no less muddleheaded than any explanation previously published.

This collection of writings includes a number of articles and essays Camus wrote for French journals. It also includes some rather extensive reporting on the situation of the colonized Algerians. These writings do much toward describing the plight of these people, but suffer from an inability to acknowledge, much less examine, the root cause for their situation.

After citing example after example of colonial neglect and abuse, Camus still fails to point the finger at the cause of these failings. My visceral reaction is simply, how can he not understand that these examples are not failings of colonialism, but exactly how colonialism works. The psychological underpinnings are fundamental to the dynamic, affecting both the colonized and the colonizer.

In what is best described as the liberal dilemma, by refusing to accept that history is as important as the present when examining colonial and imperial situations, Camus’ writing consistently falls short in its explanation of why Algeria and France found themselves in conflict in the years of the Algerian liberation struggle.

In the historical vacuum that Camus places himself in, he ends up accepting the facts of French colonialism and oppression as immutable. Furthermore, he seems to reject the idea that the Algerians should have any say in their own future unless it is on terms determined mostly by the French colonizers.

As always, Camus’ writing shines. Reading these relatively short articles prove his ability to evoke emotion and make his argument eloquently. Unbeknownst at the time of their writing, Camus’ writings about the French colonization of Algeria Camus are also chronicling its end. His personal laments regarding that demise represent the thinking of those who either cannot or will not acknowledge that the brutality and theft that all too often defines settler colonialism does not appear able to end without violence and tragedy.

Parallels to the situation of Algeria abound in modern history. One could easily argue that one of today’s still existing examples of this dynamic is found in Palestine. The Palestinians are colonized in their own lands and their struggle to liberate those lands is often violent, as is the repression of that struggle. Most of the solutions presented are those created in Washington and Tel Aviv, much like many of the solutions to Algeria’s situation were created in Paris.

The idea that Palestinians deserve the right to determine the nature of their struggle is still not a popular one in imperial capitals. Neither was the idea that the Algerians (or the Vietnamese, to name another people struggling for their liberation) deserved that right in the time of their struggle.