The book is a fictional coming of age story set in San Antonio. 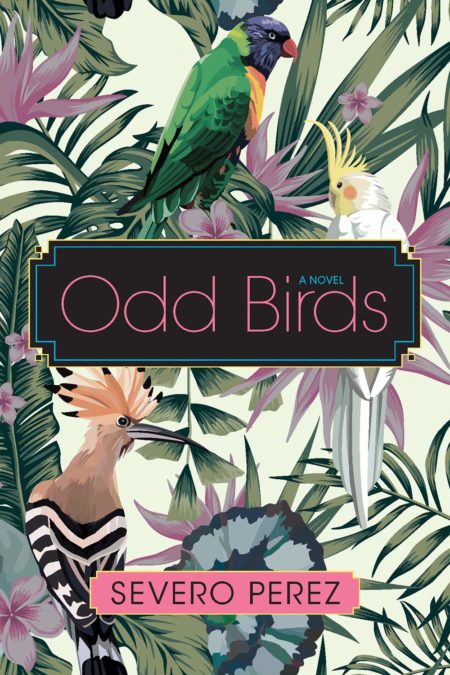 Judge this book by its cover. It is stunning. And Severo Perez’ Odd Birds is a captivating read.

Odd Birds [TCU Press, Fort Worth, 2019] is a fictional coming of age story, the tale of three young library interns, an older displaced artist, and the city of San Antonio.  Set in 1961, in the town where the author was raised, we experience a small town on the cusp of change.

Cosimo Infante Cano, a Cuban artist, has arrived with only a courier bag, his luggage stolen before he boarded the train out of Chicago’s Union Station.  The 70-year-old artist has come to Texas to join the longtime lover he has shared a life with in Paris.  But, he can’t make contact with her.  He can’t access the trunks he shipped to her address.  He has only the clothes he intended to wear on the train — a peasant shirt, beachcomber pants, red sandals, and his weathered courier bag.  He also wears a mysterious watch that was given to him by the woman he is trying to find.

Cosimo brings a cosmopolitan, but never cynical, vantage point to a provincial town, as he navigates his way through San Antonio’s bureaucracies and neighborhoods.  The tectonic shifts are becoming evident.  The soil is shifting underfoot, the nearby military bases gearing up for the Indochinese war.

Cosimo is seemingly unaware that his dark skin and uncommon clothes set off alarm bells, particularly with a library employee, Ruthann Medlin.  Medlin embodies the entitlement of the older, Anglo generation in San Antonio and is protected by her family connections to those in power.

All images of nudity have been removed from the library art books.

She is the self-appointed decency czar at the library.  All images of nudity have been removed from the library art books at her order.  When Medlin encounters Cosimo on the bridge outside the library, she is as disturbed by his look as she is alarmed by the three library interns who report to work the same day.

By necessity, Cosimo moves into cheaper housing in the Mexican-American part of town.  He encounters kindness there.  A neighbor shares her tacos made with flour tortillas and he encourages her to sell them in a restaurant where people line up to eat and watch Cosimo draw.  According to this fictional account, Cosimo deserves the credit for popularizing this now ubiquitous culinary delight.

One of the three library interns is Maddie, a free-spirited woman who alarms the decency czar with her bare legs and sandals.  Maddie then infuriates Medlin by graciously stepping up to welcome the first African-American patrons into the library.  I can imagine that Severo’s wife was an inspiration for this character.  She was both free-spirited and fiercely principled in the early ‘60s.

I enjoyed a brief meeting with Severo and his wife after his Rag Radio interview.  I knew Judith, to whom the book is dedicated, as Judy Schiffer in 1963 when I was a freshman at the University of Texas in Austin.  She was an inspiration to me in Students for a Democratic Society.  I knew that Severo and Judy had lived in Los Angeles for decades.  I assumed that they met there.  When I asked how Severo and Judy met, I was shocked to find that they had met as undergraduates before my freshman year at a time close to the setting of Odd Birds.

Odd Birds pays homage to San Antonio, its neighborhoods and restaurants, its post office and library, its Mercado, and its downtown stores.  It is the story of Cosimo navigating this world without resources, surviving on savvy and creativity, protected by the good will of many.  Despite his renown as a famous artist, he presents himself with great humility.  His identity is gradually revealed with the help of the three library interns.  And his trunks and other possessions are eventually returned to him.

Odd Birds is an easy and uplifting read, full of insights about a city that is full of surprises.