Alice Embree :
THE VOTE | Free the vote and the governor’s hostages 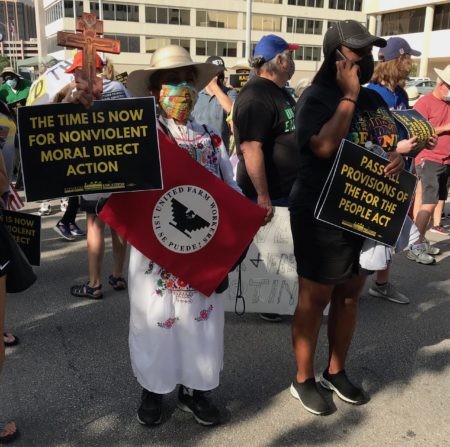 The Austin American-Statesman headlined their story on July 1: “Republicans counter Willie Nelson, Beto O’Rourke rally to support Texas Democrats in D.C.” The account of “hundreds” at the rally, and the equal time afforded a couple dozen protestors gave me a shudder of 60s déjà vu. Hundreds marched 27 miles and thousands were at the Capitol.

While it is true that Beto O’Rourke gave a powerful speech and his organization, Powered by People, boosted turnout, Beto is only part of the story. It is also true that Willie Nelson made his first public appearance since quarantine to grace the crowd with his talent and rally them with his song, “Vote ‘Em Out.” But there was so much more to this march and rally.

Several of my Texas Alliance for Retired Americans (TARA) compatriots marched much of the route from Georgetown. I joined on Saturday in front of the AFL-CIO building to walk the last mile, circling the Capitol before entering the grounds. 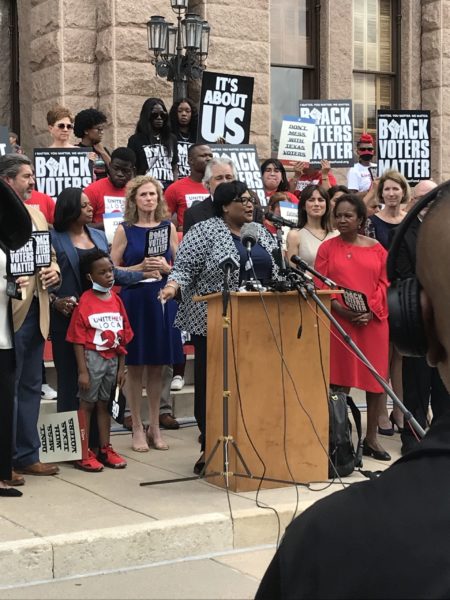 Rev. William Barber, leader of the Poor People’s Campaign, led a four-day, 27-mile march from Georgetown to Austin.  It was prompted by the voter suppression legislation currently derailed in the Texas legislature by the quorum-busting exit from the state of Democratic representatives.

Speakers at the July 31 rally drove home the need to pass the John Lewis For the People Act to restore federal voter protection, end the filibuster that prevents the U.S. Senate from voting on that measure, and restore all the provisions of the 1965 Voting Rights Act. One speaker, Luci Baines Johnson, spoke to the personal significance of the 1965 federal legislation to her father, Present Lyndon Baines Johnson.

Rev. William Barber called for the passage of the For the People Act “motivated by the spirit of the civil rights icon John Lewis.” He was not buying the expedience of Senator Joe Manchin who is pushing a diluted version. Rev. Barber emphasized the urgency of federal protections, the need to prioritize the infrastructure of democracy before passing the physical infrastructure bill. 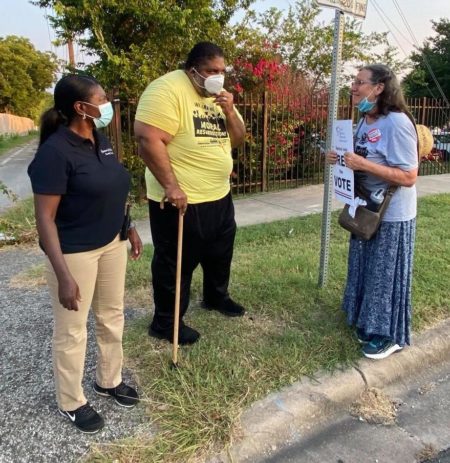 The July 31 rally was a Rainbow Coalition of multi-ethnic diversity, with thousands present. This march and rally was about much more than voting. Importantly, this was about a $15 an hour federal minimum wage. One of the speakers, a home care worker, spoke about the importance of their work in allowing the disabled community to live at home and the difficulty of surviving on $8.50 an hour wages. Several speakers addressed the needs of the immigrant community. One of the featured demands of marchers was: “permanent protections, dignity and respect for all 11 million undocumented immigrants.”

For those who need a crash course in what is at stake with state legislation, The Texas Civil Rights Project has summarized major components. They disproportionately affect voters of color, voters with disabilities, voters with young children, and older voters who want to drop off mail-in ballots.

An election worker from Harris County reminded the Capitol rally crowd of the success of their drive-through option in Texas’ most populous county. Drive-through voting was utilized by 130,000 voters, about 10% of the Harris County voters, in the 2020 presidential election. While you may think this benefited shift workers at refineries, and it did, it was heavily utilized by mothers of younger children. The success made it a target for Governor Abbott and Republican legislators. Making it easy to register and to vote is what Republicans are fighting, not voter fraud. This is particularly true when it comes to allowing county latitude in large population counties like Harris that has a population greater than 28 states. 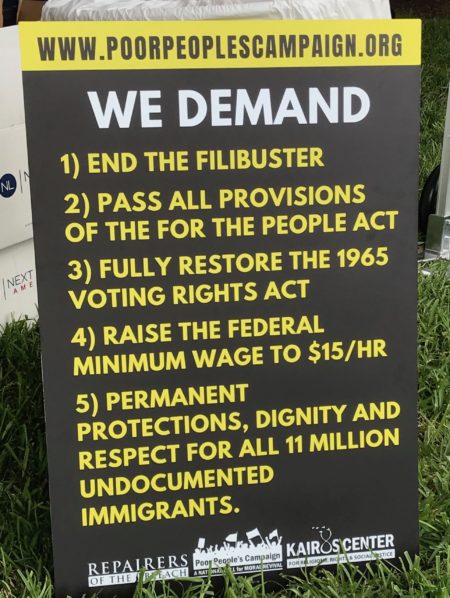 Demands of the Poor People’s Campaign. Photo by Alice Embree / The Rag Blog.

The Democrats who departed Texas for D.C. knew what the Republican agenda was. When they were barred from debate and testimony on the voting measure, they broke quorum. This was their July 12th departure statement:

Today, Texas House Democrats stand united in our decision to break quorum and refuse to let the Republican-led legislature force through dangerous legislation that would trample on Texans’ freedom to vote. We are now taking the fight to our nation’s Capitol. We are living on borrowed time in Texas. We need Congress to act now to pass the For the People Act and the John Lewis Voting Rights Act to protect Texans — and all Americans — from the Trump Republicans’ nationwide war on democracy.

There is another aspect to Governor Abbott’s Trump-inspired agenda: retribution. In a vindictive move, the governor vetoed Article X appropriations. Over 2,000 legislative staffers are now living with uncertainty regarding their pay, benefits, and retirement contributions. These are not only aides to Republican and Democratic legislators, but staffers to nonpartisan entities like the Legislative Budget Board, the Legislative Council, the State Auditor, and the Sunset Commission. Talk about “Cancel Culture.” The current appropriation for these 2,000 workers runs out August 31.

League of Women Voters of Texas President Grace Chimene issued a strong rebuke to the Governor.

Governor Abbott’s defunding of the legislature is dangerous to our democracy and undermines the will of the people and the constitutional set of checks and balances upon which our government is built… Of particular concern is the upcoming redistricting cycle, which is mandated by the U.S. and Texas Constitutions. The Legislative Council provides technical and legal support to the Texas Legislature during redistricting; and by defunding this nonpartisan agency, the Governor has jeopardized the Legislature’s ability to produce new district maps. This threatens our democracy. The census report comes out in August and a special session on redistricting is planned for early fall. Elected officials will now have to create maps without expert legal and technical assistance. The power of our votes is determined by how district maps are written… Our government and the people of Texas rely on the staff of these and other legislative offices to do the necessary work of our democracy.

Free the hostages that Governor Abbott has taken. The victims of Governor Abbott’s political theater have done nothing to deserve the uncertainty and financial instability they face.

Add democracy to your bucket list and take action. Call the governor (512-463-2000) and demand the restoration of Article X funding. And call your federal representatives to tell them to support the For the People Act and the John Lewis Voting Rights Advancement Act.

1 Response to Alice Embree :
THE VOTE | Free the vote and the governor’s hostages