This bizarre human being has become the most famous gay man in the USA. 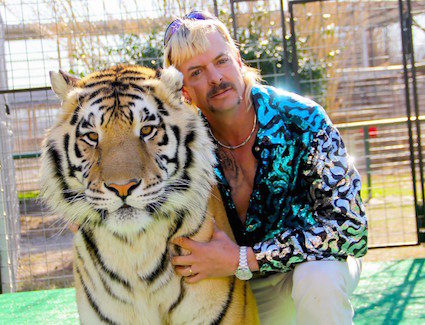 ROYALSTON, Mass.— Tiger King, an eight-episode documentary series, has caught the attention of millions of television viewers. This show is not for everyone, for reasons I’ll explain below, but I’m fascinated by it.

My commentary here is largely influenced by my identity as a gay man and by the fact that I write often on gay-related topics, but this is not a gay show any more than it is an animal rights show.

A straight friend of mine who is about half my age (I’m 78) suggested I might want to watch this unusual series. I don’t watch a lot of TV, and didn’t know a thing about this program, but I took his advice. (Spoiler alert: You could watch the series with the shock and awe that I experienced, but if you read this first, your experience will be different.)

The subtitle of the show is ‘Murder,
Mayhem and Madness.’

My friend cleverly did not mention to me that the title character of Tiger King is a gay man named Joe Exotic, so in the very first episode, I got that big surprise. The subtitle of the show, streaming on Netflix as a so-called docuseries, is “Murder, Mayhem and Madness,” and that is certainly appropriate because those ingredients are part of what makes the show so popular.

This bizarre and somewhat villainous human being has become the most famous gay man in the USA, more famous than… (Who would be the competition for such a title…maybe Anderson Cooper of CNN?) I’m still pondering the significance of this intriguing show, and as for the intention of the producers, Eric Goode and Rebecca Chaiklin, I think they knew they had the makings of great entertainment. It seems they wanted to let the footage speak for itself rather than inject a strong “message.”

Netflix has stated that 64 million people
have seen Tiger King.

Netflix has stated that 64 million people have seen Tiger King, and that’s the basis for my suggestion he’s “our” number one celebrity. But this is not a gay pride story at all. In fact, it’s likely that (with some exceptions) Joe Exotic is unlike gay men known to the typical reader of The Rag Blog. He’s not the sort of gay man who dances in discos, who has vacationed in Provincetown, who reads gay novels, who has a social consciousness, or has ever considered the concept of gay community.

And while Joe Exotic may not know the history of the gay liberation movement, he is liberated enough to be openly gay in Oklahoma and on the internet reality TV show he once starred in. That’s one of the conundrums of Tiger King, and what has drawn me to it.

I have wondered, is this series something good or bad for the gay community? I can quickly say this man is definitely not a “role model,” because his behavior is so despicable. He embraces his gay marriages, but this is not the kind of gay marriage we can be proud of. His marriages are based on manipulative relationships with 19-year-olds playing on their hunger for affection and economic security and the fact that he’s got them using crystal meth.

His openness about being gay has him allowing filming of his chatter at the funeral of one of his husbands, during which — in front of the youth’s grieving mother — he recalls how “he had come to me rubbing his balls in my face” and then he describes those balls as “golden nuggets.” Curiously, Tiger King has received little or no attention in the gay media. Other periodicals have had articles, however, including this one you can read in Women’s Health.

The cast of characters in this story is rather complex, including Joe’s husbands, employees, and business associates and even a campaign manager who helped him run for both president of the U.S. and governor of Oklahoma. Joe is delusional, narcissistic, amoral, violence-prone (proud of carrying a gun at his side and openly talking about wanting to kill a rival named Carole Baskin), and perhaps just plain crazy.

The producers suggest that some sort of cult mentality, or perhaps an addictive trait, can be found in the many people who have a peculiar desire to own and touch dangerous wild animals. Joe’s wealth comes from such people as he bred tiger cubs and sold them for about $2,000 each to private zoos as well as individuals who keep them as pets. There are thus more tigers in captivity (an estimated 5,000 to 10,000) than the estimated 4,400 in the wild.

One of Joe’s employees is a transman whose forearm was bitten off by a tiger, and yet he continues to work for and admire his boss. One of Joe’s allies is Doc Antle, who owns Myrtle Beach Safari and who fancies himself a guru with a harem of buxom young women. Joe’s rival and acknowledged enemy, Carole Baskin, owns Big Cat Rescue, Tampa, Fla. As an ordinary tourist, I visited that place in 2014 and liked it well enough, as it’s a non-profit entity that purports to be a place for exotic cats to get decent care after owners no longer wanted them. 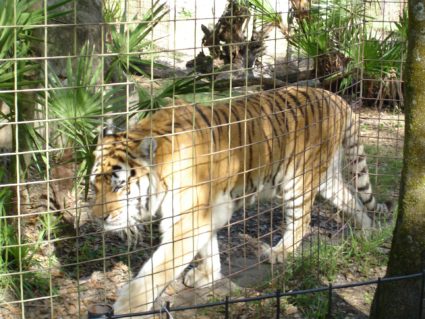 For devoted animal lovers, Joe is
quite the villain.

There is no obvious role for gay politics in this movie, which in many ways puts the animal welfare movement in the center of the narrative. For devoted animal lovers, a special emotion-laden breed themselves, Joe is quite the villain and Carole quite the heroine. However, the producers of Tiger King intentionally present no heroes in this movie, and this leads many viewers, including me, to find creepy elements in Baskin’s personality and even consider the possibility (suggested by some evidence) that she murdered her multi-millionaire first husband and maybe fed him to the tigers! The police have never charged her.

Watching this series reminded me of a feeling I had while viewing Grey Gardens, the Maysles brothers classic about two rather crazy women on Long Island. I felt as if I were watching something that I really shouldn’t see. But my curiosity motivated me and might motivate many of you reading this. Those who are super-sensitive about animal rights may feel uncomfortable or angry. A good friend told me, “Normalizing this kind of sensationalism is why we have ended up where we are as a society.” I see her point, but we have seen many movies and TV shows about war, the mafia, terrorism, and homicide.

When I was quite young, probably high school age, I went to the circus. The side show with “freaks” was still happening. It cost a little extra. I felt it was wrong to put human beings in a cage and have them stared at, and yet I decided that I wanted to see for myself. It is the same natural curiosity that drew me to be a journalist. Consider The Sopranos, a hit TV series that showed horrible criminal behavior including murders. I respect those who do not wish to watch this kind of program. But I find it insightful and often entertaining.

There’s more ahead in the Tiger King saga. Joe has begun serving 22 years for his murder-for-hire scheme and animal abuse, but from his federal prison cell he has become a plaintiff in some lawsuits and asked for a presidential pardon. Answering a reporter’s question, Trump said he’ll “look into it.” Also, Nicolas Cage has been cast as Joe Exotic in a forthcoming scripted series from CBS Television Studios and Imagine Television Studios.

Is Tiger King’s bad homo going to expand homophobia and endanger our community? I doubt it. Our nation has had other gay villains. Roy Cohn was one of the most evil men of the McCarthy Red Scare era, and his closet homosexuality is part of the story. Just a few years ago, gay millionaire and PayPal founder Peter Thiel gave lots of money to help elect Donald Trump, making Thiel a villain in my eyes. I think people gay and straight are smart enough to acknowledge that we are not all angels. I posed this question to my straight friend who told me about the series in the first place, and this is what he said:

Allen, I think the great thing about the ‘Tiger King’ documentary is that his homosexuality is just one of the many eccentric characteristics of this man that is intriguing to people. If Joe wasn’t gay and the story was about his infidelities with women, it just wouldn’t capture the attention that it does. But make him gay….now you have our attention! More people are upset with his unethical treatment of animals than they are with him being a homosexual… and that is a great thing.

So I wonder, is my own homosexuality just an eccentricity that makes me intriguing? If it does, and it causes no harm, I’m OK with that. I see no evidence so far that this series promotes homophobia.

For more sensitive and intolerant souls, this show will just be offensive.

However, for more sensitive and intolerant souls, this show will just be offensive. Another good friend of mine commented:

I find the concept of this series repellent. He sounds like Trump could adopt him as a third son. Murder, mayhem and madness? Just what we need, especially during a pandemic! Yikes! I detest the idea of getting zillions of viewers to applaud a despicable character and even make him admirable.

Assorted but minor inaccuracies in Tiger King are discussed in a 30-minute podcast produced by animal rights people. Here’s the link.

So, what’s the “take away?” The appeal of this show, as I see it, and you could say it’s not a good thing, is that many Americans are fascinated by weirdos who lack morals — and perhaps that’s why there is one living right now in the White House.

While writing this, I got an email from my excellent liberal Congressman, Jim McGovern, with a cute pun in the subject line, “Baskin you to sign the petition,” and a photo of a beautiful tiger. The message said, “We have an ineffective hodgepodge of state-by-state laws that doesn’t protect anyone — human or otherwise. We must end the private ownership of big cats. It’s dangerous to owners and communities. It’s abominably cruel to the cats.” Here’s the link to the petition.

Finally, if your interest is not crazy humans, but beautiful wild tigers, connect with the World Wildlife Fund or other reputable organizations that work on habitat protection in Asia.