Asylum, Terror, and the Future #5 from military officer to drug lord Based on case stories of Jennifer Harbury from Anne Lewis on Vimeo.

When people say that the current removals of workers and families, use of military force, concentration camps, denial of entrance for refugees, snatching of children from the arms of their mothers and fathers are new under the Trump Administration, they have little understanding of our history. It’s easy to find examples of all of these — based in the pervasive belief that white America is racially, ethically, and politically superior to other nations and peoples, both within our national boundaries and without.

This podcast explores with Jennifer Harbury why it is that so many refugees flee from Central America even though they know full well the danger of the journey with kidnapping, rape, and physical torment, and the potential for torture, imprisonment, and deportation across our border.

Documented CIA involvement in the countries of the Northern Triangle began in Guatemala in 1954 under President Eisenhower and continued through a UN-brokered peace in 1996. In the 1980s the Reagan Administration stationed thousands of U.S. troops to train right-wing rebels in Honduras. In El Salvador, the U.S. -trained and funded Atlacatl Battalion killed as many as 1,000 men, women, and children in a village, and the Reagan Administration under a Cold War containment policy ran a war in Guatemala that resulted in an estimated 150,000 civilian deaths, 85% committed by U.S. trained death squads. 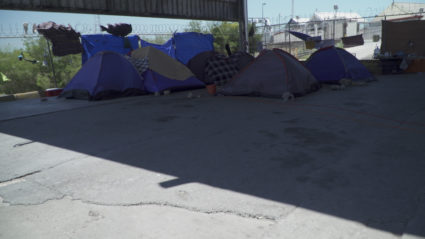 For a century, the U.S. government has intervened on behalf of the United Fruit Company, coffee companies, mining companies, and right-wing dictators against efforts towards self-emancipation and liberation of the mainly indigenous population. The idea of Manifest Destiny (that the U.S. under God should spread democracy and capitalism across the continent) followed by Theodore Roosevelt’s 1904 declaration that we are “the international police power” in Latin America, has provided a morally equivocal basis.

Why should we feel responsible for refugees with asylum claims from the Northern Triangle of Central American numbering in the hundreds of thousands?

Tamal refugee to Britain, A. Sivanandan, expressed this simply and well. “We are here because you were there.”

If we look towards the future, liberal ideas of inclusion and shared humanity, while ethical and correct, will not move us very far against the current administration. Economic programs like the new Marshall plan proposed by Julian Castro, although well intended, seems like a misunderstanding of post-World War II Western Europe and current conditions in the Northern Triangle. Add to that real skepticism about how much the U.S. should intervene in the economies of other nations and how much we can and will do to improve conditions for working people in those nations.

Instead we could look towards solutions like the priest from Columbia during the Medellín cartel era who proposed legalizing narcotics, all narcotics; or efforts to transform trade deals like CAFTA into something that benefits agricultural workers in their home countries by setting international wage, benefit, and environmental standards; or support for international labor unions; or support for indigenous movements towards liberation and worker control; or even a true pledge that the U.S. military will not be involved in any capacity providing guns and money and training torturers and murderers — shut down the School of the Americas/WHINSEC this November in honor of the 30th Anniversary of the Central American University massacre.

The list of solutions could go on and on based on principles of self-determination, self-empowerment, and international law.