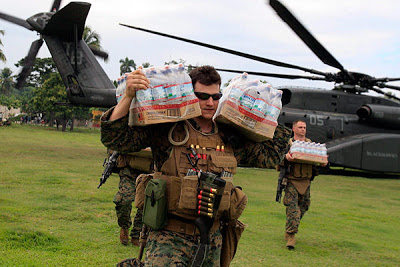 GRAND GOAVE, Haiti — Two gray 23-million-dollar hovercrafts sitting in the middle of a sandy tropical beach look like they are from another world. A pair of 15-foot-wide propeller fans sticks out from the back of each behemoth.

Along the narrow dirt road to this seaside town’s center, families live under blankets stretched over sticks.

A tent city occupies the town’s main square, surrounded by crumbling buildings. Joseph Jean-Pierre Salam, the mayor of Grand Goave, about 15 kilometers west of Port-au-Prince, estimated that some 70 percent of the city’s important structures fell during the 7.0 earthquake that struck Haiti on Jan. 12.

“They have made many promises, but we don’t see the action yet,” Salam said, referring to the international community. “We have a lot of people suffering. There is an expectation that help will come.”

Little food and water has been distributed by the dozens of U.S. troops milling about the beach since the earthquake, according to local leaders.

“I went there to talk to them,” said Jean-Jacob Renee, an English teacher. “They said they are there to set up some tents for themselves, but they did not come with food or water — anything for the people.”

He said the only aid the military brought to Grand Goave was distributed by Catholic Relief Services, an international NGO. “When they are in the town, we don’t know. We don’t have their phone number,” he said. “Nobody has helped us.”

The U.S. military did not respond to IPS requests for further clarification of the Navy’s role in Grand Goave.

An analysis by the Associated Press on Wednesday found that 33 cents of every dollar towards emergency aid in Haiti goes to military aid, more than three times the nine cents spent on food.

Residents of Grand Goave said there is a network of seven neighborhood leaders for each section of the city that has not been tapped in the relief effort. Friends are pooling resources to purchase rice when possible, but family after family living outside the rubble of their homes told IPS they have received no assistance.

The roof of Rinvil Jean Weldy’s modest one-story brick house is broken off, resting at an angle on top of a kitchen table covered in dust. The rear wall crumbled, spilling onto the cracked ground. His wife remains at a nearby hospital nursing an injury from the quake.

“We need a tent, we need food and water, all the normal things,” Weldy said, pointing at his sons, who were hammering together scraps of wood to build the frame of a tent. “To the U.N., I say, I need help now.”

Weldy has been expecting compensation from the U.N. since November 10, when he and numerous witnesses say part of a bullet fired by U.N. peacekeeping troops hit his shoulder. Four days before the earthquake, the U.N. said an internal investigation into the incident cleared the soldiers of any wrongdoing.

Witnesses told IPS the troops fired into the ground in an attempt to control a curious crowd, not into the air, as the U.N. maintains.

The U.N. peacekeepers are roundly dismissed by many Haitians as a source for relief in the country. “We have been living with the U.N. for many years, but now we see them very little,” Mayor Salam said matter-of-factly.

In Leogane, on the route back from Grand Goave to Port-Au-Prince, 500 families from a tent city in a field lined up in an orderly queue to receive food packages, in contrast to chaotic aid dispersals seen in Port-Au-Prince. Individuals walked into a clearing to grab a box each time a young Haitian man called out numbers through a megaphone.

“For us, it was very important to do this without military,” said Dolores Rescheleit, an aid worker with a German NGO called Arche Nova that provided the food. “Because the people in the camp are very strong. When you give the responsibility to the people in the camp, they will do it better than we will with the military.”

A committee of Haitians, with subcommittees to handle security, hygiene, and aid distribution, is governing the camp without problems, Rescheleit said. Women smiled as they walked back to their tents, balancing boxes of food on their heads.

I spoke to the New York Times Lede Blog yesterday about what I’ve seen in Haiti over the past few days — chaotic food distributions, pros and cons of the U.S. military’s presence, and the politics surrounding the question of former Haitian President Jean-Bertrand Aristide’s return. I’m disappointed that their writers went for the most sensational angle and highlighted the first subject, leaving the others in separate, less prominent audio embeds