Book Ends : Writers Salinger and Zinn Made a Difference 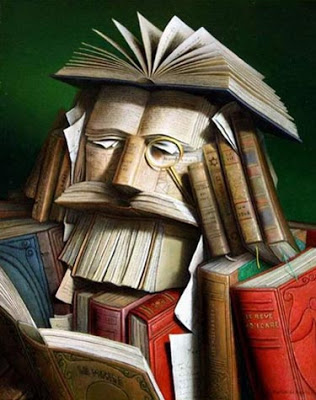 “The Man in the Books,” by Andre Martins de Barros / Found Shit.
Two writers who changed us:
J. D. Salinger and Howard Zinn

It is impossible to predict whose writing will become successful. For J. D. Salinger, it was the fact that his stories, especially Catcher in the Rye, were so perfectly poised between Huckleberry Finn and On the Road. Jack Kerouac safe for English class, without the profanity, drugs, homophilia. Samuel Clemens writing in a kid’s vernacular from the modern alienated age. In fact who but J.D Salinger created the niche for alienation to begin with?

(Disclaimer) I was Holden Caulfield. I was expelled from Prep School in 1966, and with no one willing to come get me, bussed back and dallied in Boston with my skis and everything. A few months later I ran off to San Franscisco, getting as far as Concord, Mass. To say that I lived and breathed The Catcher in the Rye would be another one of those big understatements. I even spend most of my remaining imaginary life trying to save mythical children from growing up. Peter Pan, Huck Finn, Dean Moriarty, Ken Kesey…. Holden Caulfield.

But J.D. Salinger gave up on fame, preferring to live in seclusion in New Hampshire. So I’m still following the leader somehow, though I confess some of Salinger’s writing, especially Franny and Zooey, was just a little too New York precious for my taste. Closer to the Woody Allen problem. J. D. Salinger lived to be 91 years old because he walked away from fame and fortune. Another lesson perhaps?

Another writer who defied the odds to become popular and — better than that — influential was Howard Zinn. Mr. Zinn once gave a lecture that I attended while I was at Cambridge School of Weston (after my Holden Caulfield period). The subject of the informal talk was the Vietnam War. I had never before heard an adult deliver such a scathing indictment of the American “authorities.” What a subtle rabble rouser this gentle looking Jewish man really was.

Howard Zinn worked hard to get to college and once he graduated he got a job at a black woman’s college, Spelman. He joined SNCC, the radical black civil rights group, and got fired from Spelman. At Boston University he goaded conservative president John Silber constantly. He went to Hanoi in Vietnam with Reverend Daniel Berrigan during the war. He published as an academic historian but nothing ever matched the effect he had when he put out a book for popular consumption: A People’s History of the United States, in 1980.

Basically everything the official history books left out, or glossed over, A People’s History of the United States became an unofficial textbook for radical families, radical kids and home schoolers all over the USA. Scathing in its attacks on formerly iconic figures like Teddy Roosevelt and Abraham Lincoln, A People’s History sold over two million copies. How valuable was this analysis of American history, unflinchingly critical of the U.S. elites, yet not obviously ideological? Ask ourselves that question nowadays while tea party clowns seem able to float any kind of fantasy accusations into the public discourse. They need to go back and read their Howard Zinn if they want to be radical and rational.

Two writers who managed to move millions. Books, minds, hearts, people. Both in their way accidental successes. Neither particularly ambitious or celebrity minded. J. D. Salinger romanticized the loneliness created by our modern society and Howard Zinn gave us the facts and concepts to reenvision American history from the point of view of it’s victims. Together they gave us the some of the wherewithal to survive the 1960s and the 1980s.

J.D. Salinger passed away in New Hampshire and Howard Zinn passed away in nearby Massachusetts just a little over a year after the passing of his wife Roslyn.

Thanks for sharing your thoughts, gentlemen.

2 Responses to Book Ends : Writers Salinger and Zinn Made a Difference