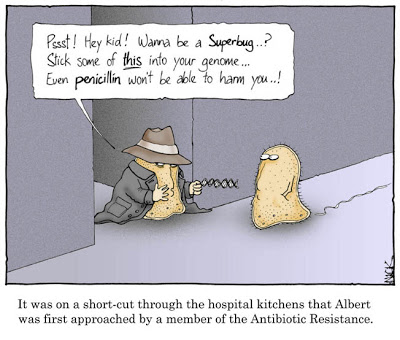 There is a very scary bacteria called Methicillin-resistant Staphylococcus aureus (MRSA). It is scary because the nasty Staph infection is resistant to virtually all the antibiotics that would be used to treat bacterial infections. Back in October of 2007, I wrote a post about MRSA being found here in Texas. In the slightly more than two years since that post, the incidence of MRSA has virtually exploded and is now found all over the world.

Please note the last country — Norway. That figure of only 1% is for real, and is the lowest percentage of MRSA-caused Staph infections in any country. How have the Norwegians been able to control the spread of MRSA and keep it to such a tiny percentage (and that tiny percentage is mostly made up of cases imported from other countries)?

Jan Hendrick-Binder, Oslo’s MRSA medical advisor, says, “It’s a very sad situation that in some places so many are dying from this, because we have shown here in Norway that Methicillin-resistant Staphylococcus aureus (MRSA) can be controlled, and with not too much effort. But you have to take it seriously, you have to give it attention, and you must not give up.”

How did they do it? Most notably by changing the way they use (or don’t misuse) antibiotics. Here in the United States, if you get a sniffle you’ll probably go to the doctor and ask for an antibiotic, and that doctor will most likely prescribe one for you. While it may help you get rid of that cold or minor infection, it also does a couple of other things. It will cause you to become resistant to that antibiotic eventually, and it will cause bacteria to mutate and become resistant to the antibiotic.

You won’t be prescribed that antibiotic for a minor infection in Norway. A doctor will refuse to prescribe it. Instead, they will tell you to take some over-the-counter drugs like aspirin or tylenol, cough syrup or antihistamines. These will help you to be more comfortable while your body fights off the infection (as the body can and will do most of the time). The antibiotics are saved for only the most serious infections, and because of this they work better when they are needed.

This is the Norwegian way of dealing with MRSA (which is reaching epidemic proportions in most other countries):

Norwegian doctors prescribe fewer antibiotics than any other country, so people do not have a chance to develop resistance to them.

Patients with MRSA are isolated and medical staff who test positive stay at home.

Doctors track each case of MRSA by its individual strain, interviewing patients about where they’ve been and who they’ve been with, testing anyone who has been in contact with them.

The truth is that any country could do what the Norwegians have done. But they must first stop misusing antibiotics. Antibiotics are truly miracle drugs, but we are destroying their effectiveness by abusing them — using them for infections that the body can easily fight off without their help.

Can we change the way we use antibiotics in the United States? I don’t know. I’m afraid that too many patients (and doctors) are locked-in to the wasteful and ultimately hurtful way we use the gift of antibiotics. I’m afraid most people would be very resistant to change. And after viewing the reaction of many to reforming health care reform, I doubt that many would be receptive to legislation to fix the problem.

We can expect Big Pharma to fight this change tooth-and-nail, because they are making tons of money off the misuse of antibiotics (if you’ve paid for a prescription of antibiotics recently, then you know that). Don’t think they will act in the best interest of patients. Like most huge corporations, their only concern is today’s profits — not the future problems this is going to cause for all of us.

We must begin a dialogue in this country — with an eye to changing the public’s (and the doctors’) perception of how antibiotics should be used. And this dialogue must happen now, because we are running out of time.

I do know one thing. If we don’t change this soon, it won’t be too far in the future before we’ll wish that we had.

This entry was posted in Rag Bloggers and tagged Health, Medicine, Ted McLaughlin. Bookmark the permalink.