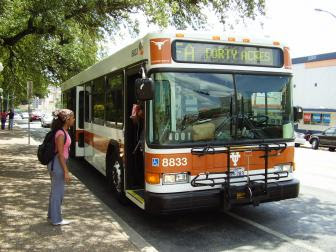 Capital Metro and the Environment
By Glenn Gaven / The Rag Blog / May 7, 2009

As EPA clean air requirements become more stringent, Texas’ Travis County is poised to enter a new phase of its non-attainment status. For the first time, TCEQ and the County will likely be forced to implement a serious action plan to reduce greenhouse gases, or risk massive reductions in federal transportation subsidy. Mass transit is well recognized as an immediate, efficient means to reduce pollution.

For whatever reason, our local transit authority is so far unwilling to genuinely participate in cleaning our air. They have opted against natural gas and expanding hybrid utilization as fuel options in favor of diesel. Capital Metro last year discontinued free rides on ozone action days even though they saw an average 15% ridership increase on those days. They raised fares last year and are set to raise them again this October. Raising fares reduces ridership. In fact, current ridership goals are set for 20,000 less trips per month and actual ridership figures are even lower, averaging 10% fewer riders from last year. This means more cars, far and away the number one source of ozone pollution, on our roads.

On Earth Day 2008, the Bus Riders Union-ATX submitted a proposal for fare-free transit to Capital Metro. The proposal was aimed at increasing mobility for all Austin residents, and just as important, at reducing pollution.

Fare-free transit is highly efficient as it eliminates the expensive and time consuming collection of fares on the bus. Such a system reduces pollution by getting people out of their cars. During a 15 month fare-free period in 1989-90 Capital Metro increased ridership by 80%. Not only were more people riding the bus, but discussion about adding more freeway capacity on IH35 subsided. Pollution is further reduced as idling times for buses lessens without fare collection and decreased traffic congestion lowers idling times of both buses and cars.

Capital Metropolitan Transportation Authority should not just rescind the impending fare hike which would devastate ridership, they should immediately implement a fare-free system to coax riders out of their ozone emitting cars. The small drop in revenue would be more than recovered by eliminating the cost of collection, maintaining and increasing federal funding, and reducing the expensive and deadly health care costs resulting from breathing dirty air.