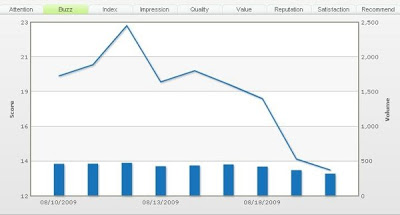 As the Whole Foods Boycott grows on Facebook, brand perception is dropping

As the Whole Foods Boycott on Facebook continues to swell — the group now has over 27,000 members — we’re finding out that CEO John Mackey’s statements in The Wall Street Journal are affecting more than just angry Facebookers, but consumers in general.

According to YouGov’s BrandIndex, which tracks the daily consumer perception of brands, consumer opinion towards Whole Foods has been falling fast on the Web since the editorial appeared.

YouGov scores brands from 100 to -100, with zero being neutral, based on daily interviews from respondents, and they track the change in the score to show a rise or decline in overall brand perception.

Their buzz chart is a reflection of how buzz perception changes over time. They ask consumers, “If you’ve heard anything about the brand in the last two weeks, was it positive or negative?” Their results indicate that Whole Foods had a buzz score of 22.8 on August 12th, and that score fell to 13.6 by August 20th. That’s almost a 10 point drop in just over a week. 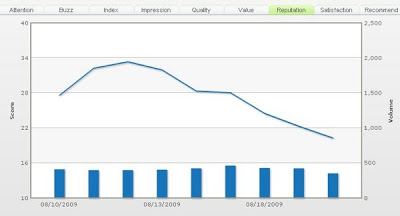 The reputation chart is scored in the same manner, but asks respondents, “Would you be proud or embarrassed to work for this brand?” According to their research, the reputation score is suffering even more. On August 12th Whole Foods had a 33.3 score, but by the 20th they were down to 20.3.

Can the results be trusted? Well, according to the firm, “YouGov’s BrandIndex interviews 5,000 people each weekday from a representative US population sample, more than 1.2 million interviews per year. Respondents are drawn from an online panel of more than 1MM individuals. Margin of error is a very accurate +/- 2%.”

While we take no sides on the issue, it’s hard not to attribute at least some of the drop in consumer perception to the vocal Facebook group that has emerged in the aftermath of the CEO’s Wall Street Journal op-ed. Should YouGov’s research be as accurate as it claims to be, then Whole Foods definitely needs to be concerned about this social media backlash that’s negatively impacting consumer opinion.

Thanks to David P. Hamilton / The Rag Blog