Bailout : Paulson Could Easily Throw in a Few Hundred Million of His Own Bucks 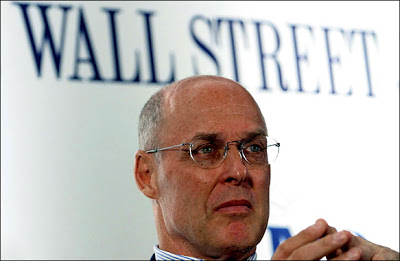 Henry (Hank) Paulson in 2004 when he was chairman and chief executive of Goldman Sachs. He left with full pockets. Photo by Graham Barclay / Bloomberg News.
After all, Goldman Sachs left him in pretty good shape
By Duncan Echelson / The Rag Blog / September 23, 2008

When he left Goldman Sachs after more than three decades to join the administration, Paulson’s net worth was estimated at more than $700 million. He owned 3.23 million shares of Goldman Sachs stock, which was valued at the time at around $480 million.

With that kind of money, I figure Paulson wouldn’t mind pitching in $600 million to the bailout. He won’t suffer too much with only $100 million in his accounts.

1 Response to Bailout : Paulson Could Easily Throw in a Few Hundred Million of His Own Bucks