Bert Garskof :
Listen to Bernie, then take to the streets

Sanders can’t bring about his exciting progressive program without what he calls a revolution. 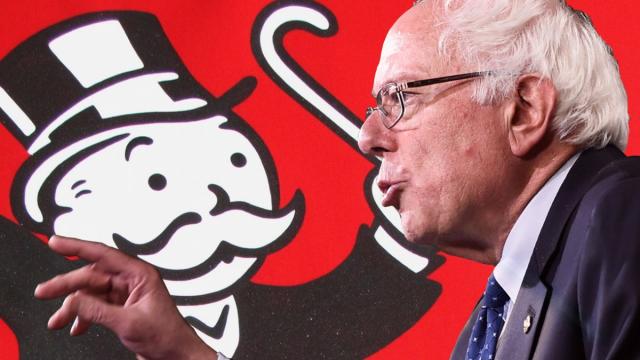 Bernie with member of the billionaire class. Image from Occupy.com.

Hell, we get it. Not that he is a socialist or communist or anarchist. You don’t elect what would be my vision: anarchy/community/freedom/equality. That’s a different story and an exciting one, but Sanders is a legitimate Social Democratic, as people in Europe would name him. In America he is really a New Deal Democrat. Alone in the current set of options, his policy if adopted would really do some good.

But, brothers and sisters listen to Bernie. He says clearly that he will not be able to bring about this progressive program without what he calls a revolution. When he goes on to talk about his use of this exciting term, he means a mass movement like in the ’60s when millions of people played a significant role in helping to stop our murderous and cowardly war on Vietnam.

The women’s movement, the civil rights movement, the abolitionists, the eight-hour-day movement, the right to have a union, women’s suffrage. Each of these forced Congress to enact progress and presidents to use their power for good.

Let me be clear: change in the streets means laws in congress. Without the massings of millions of people, of thousands of demonstrations, of hundreds of occupations, without this upsurge of people’s righteous energy, Bernie is nothing — a cheerleader not a leader. It wouldn’t be his fault. It would be ours. Dig it. Do it.

[Retired professor of psychology at Quinnipiac University, Bert Garskof was a leader in SDS in the ‘60s. He has worked with Connecticut Greens, MDS, and many other groups, and has written social issue theater presentations for kids, including The Rosa Parks Story, that have toured nationally. He can be reached at Bertram.Garskof@Quinnipiac.edu.]

2 Responses to Bert Garskof :
Listen to Bernie, then take to the streets