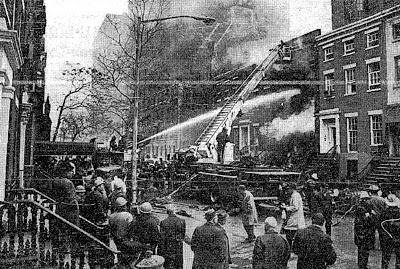 Eventually we came to think that we could make a revolution, and that in any case it was our responsibility to try.

A front page headline in the New York Times on March 7, 1970, announced: “Townhouse Razed by Blast and Fire; Man’s Body Found.” The story described an elegant four-story brick building in Greenwich Village destroyed by three large explosions and a raging fire “probably caused by leaking gas” at about noon on Friday, March 6.

The body was later identified as belonging to 23-year old Ted Gold, a leader of the 1968 student strike at Columbia University, a teacher, and a member of a “militant faction of Students for a Democratic Society.”

Over the next several days two more bodies were discovered — Diana Oughton and Terry Robbins had both been student leaders, civil rights and anti-war activists — and by March 15 the Times reported that police had found “57 sticks of dynamite, four homemade pipe bombs and about thirty blasting caps in the rubble,” and referred to the townhouse for the first time as a “bomb factory.”

That awful event announced widely the existence of the Weather Underground, in some ways the most notorious, but far from the only group of Americans to take up armed struggle as a protest tool at that moment — the story took off from there, growing, changing, and accelerating every day

A few days after the Townhouse explosion Ralph Featherstone and William “Che” Payne, two “black militants,” associated with the Student Nonviolent Coordinating Committee, according to Time Magazine, “were killed when their car was blasted to bits” by a bomb police said was being transported to Washington D.C. to protest the prosecution of SNCC leader H. Rap Brown. The Black Liberation Army leapt onto the national scene, and other organized groups — Puerto Rican independistas, Native American first nation militants, and Chicano separatists — emerged demanding self-determination and justice. 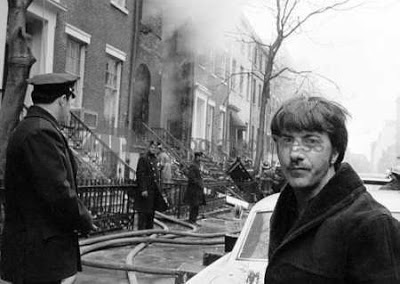 Next door neighbor Dustin Hoffman stands near the West 11th Street townhouse that was destroyed by an explosion and fire on March 6, 1970. Photo from the AP.
Violent resistance to violence was far from an isolated phenomenon: Time noted that in 1969 there had been 61 bombings on college campuses, most targeting ROTC and other war-related targets, and 93 bomb explosions in New York, half of them classified as “political,” a category that was “virtually non-existent 10 years ago.”

According to the FBI, from the start of 1969 to mid-April 1970, there were 40,934 bombings, attempted bombings, and bomb threats. Out of this total, 975 had been explosive, as opposed to incendiary, attacks, meaning that on average, two bombs planned, constructed, and placed, detonated every day for more than a year. Our national history includes times of anarchist resistance, labor militancy, massive unreported (and still largely unacknowledged) slave rebellions, and the armed abolitionism of John Brown; the late 1960’s and 1970’s was becoming one of those times.

How had it come to this?

Empire, invasion, and occupation always earn blow-back. In 1965 most Americans supported the war, but by 1968 people had turned massively against it — the result of protest and organizing and a burgeoning peace movement, and of civil rights leaders like the militants from SNCC, Muhammad Ali, and Martin Luther King, Jr. denouncing the war as illegal and immoral. Even more important, veterans came home and told the truth about the reality of aggression and occupation and war crimes.

The US government found itself isolated around the world and in profound and growing conflict with its own people inside its own borders. The Vietnamese themselves were decisive: they refused to be defeated. The Tet Offensive in 1968 destroyed any fantasy of an American victory, and when President Lyndon Johnson announced at the end of March 1968 that he would not run for reelection, it seemed to us we had won a victory.

But peace proved to be a dream deferred, for the war did not end — it escalated into an air and sea war, expanded into all of Cambodia and Laos, and every week the war dragged on another six thousand people were murdered in Southeast Asia. Six thousand human beings — massive, unthinkable numbers — were thrown into the furnaces of war and death that had been constructed by our own government.

The war was lost, but the terror continued. All Vietnamese territories outside U.S. control were declared “free-fire zones” and airplanes rained bombs and napalm on anything that moved, destroying crops and live-stock and entire villages. John McCain, an unremorseful war criminal, flew some of those missions. As a young lieutenant, John Kerry testified in Senate hearings at the time that U.S. troops committed war crimes every day as a matter of policy, not choice.

No one knew precisely how to proceed, for the anti-war movement had done what it had set out to do — we’d persuaded the American people to oppose the war, built a massive movement and a majority peace sentiment — and still we couldn’t find any sure-fire way to stop the killing; millions of people mobilized for peace, and our project, our task and our obsession, was so simple to state, so excruciatingly difficult to achieve: peace now.

The war slogged on into a murky and unacceptable future, and the anti-war forces splintered then — some of us tried to organize a peace wing within the Democratic Party, others organized in factories and workplaces, some fled to Europe or Africa or Canada, others to communes, the land, and hopeful but small organizing projects. Some began to build a vehicle to fight the war-makers by other means, a clandestine force that would, we hoped, survive what we thought of as an impending American totalitarianism.

Every choice was contemplated, each seemed a possibility then — and we had friends and family in every camp — and no choice seemed utterly beyond the pale.

The Weather Underground carried out a series of illegal and symbolic attacks on property then, some 20 acts over its entire existence, and no one was killed or harmed; the goal was not to terrorize people, but to scream out the message that the U.S. government and its military were committing acts of terrorism in our name, and that the American people should never tolerate that.

Some felt that our actions were misguided at best, off-the-tracks, indefensible and even despicable, and that case is not impossible to make. But America’s longest war itself, with all its attendant horrors, was doubly despicable, and while many stood up, who in fact did the right thing; who ended the war; who transformed the world?

We began to think of ourselves as part of the Third World project — revolutionary liberation movements demanding justice and freeing themselves from empire, we believed, would also transform the world. We thought that we who lived in the metropolis of empire had a special duty to “oppose our own imperialism” and to resist our own government’s imperial dreams.

Eventually we came to think that we could make a revolution, and that in any case it was our responsibility to try. It was a big stretch, but every revolution is impossible until it occurs; after the fact, every revolution seems inevitable.

All of that was 40 years ago — lots of water under the bridge since then, raging rivers and cascading falls, rapids and torrents, chutes and ladders — a long time in the life of a person — the young become the old, and stories get retold.

But it’s also a matter of perspective: the meaning of any historical event will always be contested, and the more recent the event, the fiercer the contestation. The last word has not been written about the radical movements of youth in Europe in 1968, and certainly the meaning of the Black Freedom Movement or of the U.S. invasion and occupation of Viet Nam and the various American reactions to that catastrophe — from mindless jingoism to sincere patriotism, from reluctant participation to gung-ho brutality, from protest to armed resistance — are far from settled.

We’re reminded of the Chinese premier Chou En Lai responding to a French journalist’s question many years ago about the impact of the 18th Century French revolution on the 20th Century Chinese revolution. He thought for quite awhile and finally said, “It’s too soon to tell.” Forty years is less than the blink of an eye.

The big wheel keeps on turning: events and actions and adventures plunge relentlessly forward and nothing withstands the whirlwind of life on-the-move and history in-the-making. No single narrative can ever adequately speak to the diversity and complexity of human experience, for meaning itself is in the mix, always contested and never easily settled.

Because meaning is made and remade in the present tense, our backward glances are now necessarily refracted through the U.S. defeat in Viet Nam, the steady decline of empire, the hollowing out of the economy through militarism, the destruction of our political system, the environmental catastrophe that capitalism wrought, the terror attacks of 9/11 and the subsequent invasions and occupations and wars that continue as defining features of our national life. There is no sturdy accounting of distant times: everything must change, no one and nothing remains the same.

Many who knew and loved them 40 years ago, choose to remember Ted Gold, Diana Oughton, Terry Robbins, Ralph Featherstone, and Che Payne every day as beautiful and committed young people who believed fiercely in peace and justice and freedom, believed further that all men and women are of incalculable value, and thought that they had a personal and urgent responsibility to act on that deep belief. 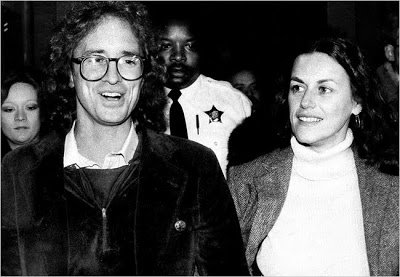 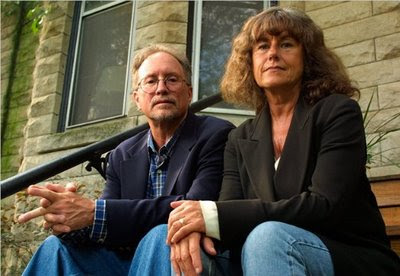 Bill Ayers and Bernardine Dohrn.
We think of Brecht: a smile is a kind of indifference to injustice. And then we turn to Rosa Luxemburg writing to a friend from prison: love your own life enough to care for the children and the elderly, to enjoy a good meal and a beautiful sunset, to embrace friends and lovers; and love the world enough to put your shoulder on history’s great wheel when required.

We have not forgotten our fallen friends, not for a moment. March 6 was for us a time of more formal remembrance. Their deaths and all that followed offered us an opportunity to reconsider and recover. We were able to recommit and to see that the first casualty of making oneself into an instrument of war is always one’s own humanity, that, in the words of the poet Marge Piercy, “conscience is the sword we wield. Conscience is the sword that runs us through.” We remember our lost comrades, their many brave, as well as their damaging last acts, and we continue to vibrate with the hope and despair they embodied then.

[William Ayers is Distinguished Professor of Education and Senior University Scholar at the University of Illinois at Chicago. Bernardine Dohrn is Clinical Associate Professor of Law and Director and founder of the Children and Family Justice Center at Northwestern University. Both Ayers and Dohrn were leaders in SDS and the New Left, and were founders of Weatherman and the Weather Underground.]