Bipartisan Deadlock : How Best NOT to Reform Health Care 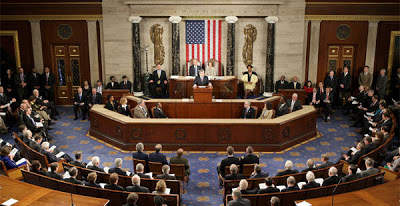 Bypartisanship at its best: hammering out a plan that will deny health care to U.S. citizens.
Congress deadlocked over how to not provide health care to American citizens


Senate leaders Harry Reid (D-NV) and Mitch McConnell (R-KY) point to Congress’ failure to pass legislation before a July 31 deadline as proof of just how serious lawmakers are about stringing along the American people and never actually reforming the health care industry in any meaningful way.

WASHINGTON — After months of committee meetings and hundreds of hours of heated debate, the United States Congress remained deadlocked this week over the best possible way to deny Americans health care.

“Both parties understand that the current system is broken,” House Speaker Nancy Pelosi told reporters Monday. “But what we can’t seem to agree upon is how to best keep it broken, while still ensuring that no elected official takes any political risk whatsoever. It’s a very complicated issue.”

“Ultimately, though, it’s our responsibility as lawmakers to put these differences aside and focus on refusing Americans the health care they deserve,” Pelosi added.

The legislative stalemate largely stems from competing ideologies deeply rooted along party lines. Democrats want to create a government-run system for not providing health care, while Republicans say coverage is best denied by allowing private insurers to make it unaffordable for as many citizens as possible.

“We have over 40 million people without insurance in this country today, and that is unacceptable,” Sen. Orrin Hatch (R-UT) said. “If we would just quit squabbling so much, we could get that number up to 50 or even 100 million. Why, there’s no reason we can’t work together to deny health care to everyone but the richest 1 percent of the population.”

“That’s what America is all about,” he added.

House Minority Leader John Boehner (R-OH) said on Meet The Press that Republicans would never agree to a plan that doesn’t allow citizens the choice to be denied medical care in the private sector.

“Americans don’t need some government official telling them they don’t have the proper coverage to receive treatment,” Boehner said. “What they need is massive insurance companies to become even more rich and powerful by withholding from average citizens the care they so desperately require. We’re talking about people’s health and the obscene profits associated with that, after all.”

Though there remain irreconcilable points, both parties have reached some common ground in recent weeks. Senate leaders Harry Reid (D-NV) and Mitch McConnell (R-KY) point to Congress’ failure to pass legislation before a July 31 deadline as proof of just how serious lawmakers are about stringing along the American people and never actually reforming the health care industry in any meaningful way.

“People should know that every day we are working without their best interests in mind,” Reid said. “But the goal here is not to push through some watered-down bill that only denies health care to a few Americans here and a few Americans there. The goal is to recognize that all Americans have a God-given right to proper medical attention and then make sure there’s no chance in hell that ever happens.”

“No matter what we come up with,” Reid continued, “rest assured that millions of citizens will remain dangerously uninsured, and the inflated health care industry will continue to bankrupt the country for decades.”

Other lawmakers stressed that, while there has been some progress, the window of cooperation was closing.

“When you get into the nuts and bolts of how best not to provide people with care essential to their survival, there are many things to take into consideration,” Rep. Michele Bachmann (R-MN) said. “I believe we can create a plan for Americans that allows them to not be able to go to the hospital, not get the treatment they need, and ultimately whither away and die. But we’ve got to act fast.”

For his part, President Barack Obama claimed to be optimistic, even saying he believes that a health care denial bill will pass in both houses of Congress by the end of the year.

“We have an opportunity to do something truly historic in 2009,” Obama said to a mostly silent crowd during a town hall meeting in Virginia yesterday. “I promise I will only sign a clear and comprehensive health care bill that fully denies coverage to you, your sick mother, her husband, middle-class Americans, single-parent households, the unemployed, and most importantly, anyone in need of emergency medical attention.”

“This administration is committed to not providing health care,” Obama added. “Not just for this generation of Americans, but for many generations to come.”