With 30 percent unemployment and 44 percent of its people in poverty, Egypt saw an eruption of strikes and other protests. 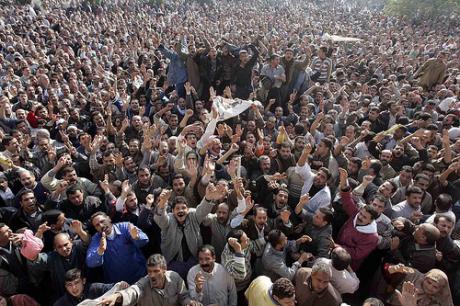 A wave of worker protests rolled through Egypt. Image from libcom.org.

According to James Gelvin’s The Arab Uprising: What Everyone Needs To Know, “in Egypt…about 40 percent of the population lives on less than two dollars a day,” and as recently as 2008 The Economist magazine noted that under Mubarak’s regime “44 percent of Egyptians still” counted “as poor or extremely poor, with some 2.6 million people so destitute that their entire income cannot cover basic food needs” and “the average wage” was “less than $100 a month.”

In his September 2009 Against The Current article, titled “Egypt’s Long Labor History,” Atef Said observed that by 2009 in Egypt “around 30 percent of the workforce [was] unemployed, 7 percent of children miss schools because of poverty” and there were “no fewer than 100,000 homeless street kids.”

As recently as 2008, according to Egypt’s Central Agency for Population, Mobilization and Statistics, in Egypt “the average working week in the private sector” was “57 hours.” But according to a March 31, 2008 article titled “A new workers’ movement: the strike wave of 2007” by Mustafa Bassiouny and Omar Said, “in reality, large numbers of private sector workers” worked “12 hours per day” in 2008; and “private sector workers” had “no real protection against dismissal, greatly reduced access to health and safety, and occupational health.”

So, not surprisingly, between December 7, 2006 and Sept. 23, 2007, “more than 650 workers’ protests took place across Egypt, a large proportion of which were strikes” and “this nine-month period saw 198,414 workers take strike action,” according Mustafa Bassiouny and Omar Said’s 2008 article.

The same article also noted that after Egyptian workers at Misr Spinning in Mahalla al-Kubra demanded a two-month profit sharing bonus, “24,000 workers began a strike;” and “the strike triggered a wave of workers’ protests across Egypt crossing different sectors of the economy and industries — from Mahalla to Kafr al-Dawwar to Shibin Al-Kum; from spinning and weaving to cement, to the railways, the metro and public transport workers.”

According to Mustafa Bassiouny and Omar Said’s 2008 article, “one important feature” of the 2006-2007 strike movement in Egypt was “the wide participation” of Egyptian women workers. As the same article noted:

It was women workers in Mahalla who started the strike in December 2006 and who played a central role in consolidating it. In the Mansura-Espana factory the majority of the workforce are women and they continued the strike and the sit-in, and slept over in the factory despite facing criticism for doing so. Likewise, many of the workers at South Cairo and Giza Grain Mills and North Cairo mills are women. Women played a prominent role in strikes in the Hennawi tobacco factory in Damanhur and a leading role in the movement of the property tax collectors.

And according to Bassiouny and Said, the 2006-2007 strike wave in Egypt “succeeded in generalizing a culture of protest’ throughout the country, although “in the majority of cases, the demands” of the striking Egyptian workers in 2006 and 2007 were just “of a narrow economic nature, such as the call for increased incentives.”

Between September 2007 and the beginning of the mass-based Egyptian Revolution in late January 2011, labor unrest  continued and by January 2011 “more than 3,000 labor actions involving more than 2 million” Egyptian “workers and their families” had taken place between 2004 and early 2011, according to The Arab Uprising: What Everyone Needs To Know.

In response to the increasing militancy of Egyptian workers and the growth of the movement for democratization of Egyptian society between 2006 and early 2011, Mubarak’s regime apparently increased the size of its “internal security” budget and its state security forces after 2006. As Atef Said’s September 2009 Against The Current article noted:

In 2006…the annual budget for internal security was $1.5 billion, more than the entire national budget for health care. This number…has increased after the protest waves in 2005 and 2006. Further, the security police forces comprise 1.4 million officers, nearly four times the size of the Egyptian army… If we added the number of police sergeants and formally hired spies (moukhbreen), the total number of police persons in Egypt would be 1.7 million… A police person to every 37 Egyptians…

According to The Arab Uprising, “Mubarak was…ambitious when it came to his security forces” and by early 2011 “an estimated 2 million Egyptians participated at any given time in Egypt’s security apparatus.”

When more protests and activism in support of the democratization of Egyptian society broke out in 2010, the security forces of the dictatorial Mubarak regime were again used to repress political dissent in Egypt.

In 2010 security officials…disrupted political rallies, public protests, and efforts by members and supporters of the Muslim Brotherhood to compete in elections. Activists with the April 6 Youth Movement, named after a strike of workers and opposition activists on that date in 2008, organized a demonstration on Apr. 6, 2010, to call for an end to the state of emergency and amend the constitution to allow for open and inclusive presidential elections. Authorities refused them permission to demonstrate…Around 60 demonstrators gathered anyway in front of the Shura Council building on Kasr al-Aini Street and peacefully chanted slogans. After 10 minutes, security officials moved in, arresting at least 21 protesters and beating others. Officials arrested more than 100 peaceful demonstrators in Cairo that day. The prosecutor charged 33 of them with participating in a demonstration to overthrow the regime…

In June 2010 widespread demonstrations took place after police officers brutally beat 28-year-old Khaled Said to death on an Alexandria street. On June 20 security officers arrested at least 55 protesters in Cairo, detaining them for up to four hours before releasing them. When protesters assembled at Bab al-Louk Square and a group of around 100 of them walked from there through downtown streets chanting slogans accusing the Ministry of Interior of responsibility for Said’s death, riot police and central security officers intervened. Human Rights Watch observed security officials beating, dispersing, and arresting scores of people, including protesters, journalists, and bystanders. Security officials drove the detainees around for hours and then released them on highways outside of Cairo.

On October 13, 2010, the Mubarak regime “issued regulations” that brought “all live broadcasts by private companies under control of state television,” according to the Human Rights Watch website; and on Nov. 1, 2010 the regime “issued directives requiring prior permission for satellite television uplinks.” In addition, “scores of activists affiliated with the National Association for Change, the Campaign to Support [Mohamed] El Baradei, and the April 6 Youth Movement,” were arrested in 2010 by security officers of Mubarak’s regimes.