BOOKS / Covering for the Bosses : Labor and the Southern Press 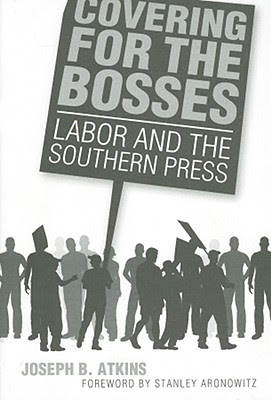 How Southern media have strengthened the region’s corporatocracy.

The slavocracy — rooted Southern model of low wages and harshly anti-union labor relations has successfully undermined and defeated many social-welfare protections throughout the nation. Indeed, the South increasingly sets the terms of America’s social contract between labor and capital, as was apparent during last December’s debate over federal aid to General Motors and Chrysler.

Southern senators –all from states home to non-union auto factories run by international firms — claimed that excessive United Auto Worker (UAW) wages were responsible for Detroit’s crisis, insisting that only massive wage cuts imposed immediately by the federal government would address the problem. As a result, the UAW has been forced to accept a starting wage of $14.50 per hour for new autoworkers -— a bit more than half the typical $26 to $28 union wage.

More broadly, the Southern model of all-powerful management, docile low-wage labor and public subsidy-fueled operations has become the dominant form of U.S. capitalism exported around the globe, argues Joseph Atkins in his compelling book Covering for the Bosses: Labor and the Southern Press (University Press of Mississippi, 2008). The media of the former Confederacy has played a crucial role in promoting the low-wage Southern model, and Atkins traces its development alongside the still-strong oligarchic pillars of the South.

Throughout the Southern system’s history, the region’s media have almost invariably been part of what Atkins labels the “solid phalanx” of powerful interests: a unified business community, elected officials, the clergy and other opinion shapers. Southern newspapers and radio stations joined the forces relentlessly battling unions, the New Deal and advancements in civil rights for African-Americans.

Southern media acted as uncritical stenographers transmitting and amplifying the crudely racist views of segregationist politicians like Strom Thurmond and Theodore Bilbo, who viewed the Congress of Industrial Organizations, the civil rights movement and communism as equal partners in a grand conspiracy to destroy the Southern way of life.

Eventually, the overt resistance by Southern media to African-American rights receded, as it conflicted with the image of a tranquil, cosmopolitan “New South” open to investors from the entire world. But to this day, the Southern press routinely celebrates corporations’ investments —- however richly subsidized by the public —- as a beneficent gift to local communities. Few media outlets have investigated any corporate misconduct or even acknowledged the existence of unions and the plight of low-wage workers.

By the 1970s, the South had become the main fulcrum by which Corporate America gained the leverage to engage in what the late UAW President Douglas Fraser in 1976 called “a new class war.” The war escalated in the 1980s as unionized workers in the North were routinely threatened with the loss of their jobs to the South unless they took pay cuts. State legislatures across the North found themselves under pressure to slash corporate taxes to create a “good business climate.”

Corporations succeeded in winning enormous state and local tax cuts and reaped the benefits of an ever-escalating competition between states for jobs. But in many cases, corporations merely pocketed these tax benefits and joined an onrushing tide of Northern-based firms opening up new non-union subsidiaries in the South. The South became the nation’s fastest growing region, in terms of both jobs and population.

This approach to luring industry with subsidies has during the past eight decades evolved into an interstate race to the bottom, encouraging low wages, low corporate tax rates and rich packages of incentives for corporations that don’t need them —- all at the expense of public needs.

Ironically, as Atkins notes, the South has been hit hard by “free-trade” agreements like the North American Free Trade Agreement, which was aggressively promoted by Arkansas-born President Bill Clinton and gained overwhelming support from corporate-friendly Southern legislators of both parties. Corporate America’s leap-frogging to even-lower-wage nations like Mexico and China has begun to seriously deplete the former Confederacy’s manufacturing base, in much the same way that the South once sapped jobs from Northern states. Thus, capital’s mobility has succeeded in undermining the U.S. labor movement as an effective force for economic and social democracy, especially in the South.

As Atkins’ book vividly shows, another crucial component of genuine democracy has been grievously lacking in the South: independent mass media willing to challenge and investigate corporate power and to serve as the voice of those shut up by bosses, shut out of power and shut down by multinational corporations seeking ever cheaper labor.

[Roger Bybee is a Milwaukee-based freelance writer and progressive publicity consultant whose work has appeared in numerous national publications and websites, including Z magazine, Dollars & Sense, Yes!, The Progressive, Multinational Monitor, The American Prospect and Foreign Policy in Focus. Bybee edited The Racine Labor weekly newspaper for 14 years in his hometown of Racine, Wis., where his grandfathers and father were socialist and labor activists. His website can be found here.]

Find Covering for the Bosses: Labor and the Southern Press at Amazon.com.