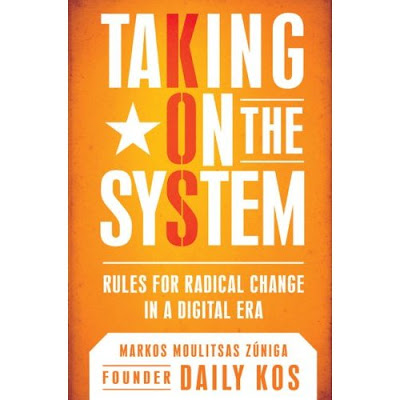 Markos Moulitsas’ new book, Taking On the System, is not really about political blogs. One would expect the founder of Daily Kos to write about the netroots (and his book offers plenty of anecdotes about how they’ve changed politics), but it’s really a guide for how ordinary people can make an impact in the 21st Century. Moulitsas writes about how the Internet has democratized the process – making old gatekeepers like party bosses, media moguls and even record companies less powerful and relevant than before. But modeling himself after the late Saul Alinsky, Moulitsas offers plenty of pragmatic advice for political activists – like “stay on message,” “how to handle your enemies,” and “pick your battles” – that was applicable in an earlier era. In the 21st Century, however, more can play this game. Taking On the System is a resource for progressives hopeful about November – but anxious about how to keep that momentum going in an Obama Administration

The impact Daily Kos and other blogs have had is so well established that anyone picking up Taking On the System will probably be familiar with it already. But what Moulitsas argues is that he’s really no one special: any citizen can use the Internet to bypass the traditional gatekeepers who once decided which political candidates were legitimate, what wisdom was conventional and even which songs became hits.

Activists don’t need to hold press conferences and hope the media shows up – they can create their own media with a blog. Political candidates getting started don’t have to kowtow to the same rich donors – if they have a compelling grass-roots message, the netroots will embrace them. Even musicians don’t need to be “discovered” by recording executives to make it big – now they can use social networking sites like MySpace.

It’s not about destroying the gatekeepers, says Moulitsas. It’s about using the Internet (along with a compelling product) so you can simply by-pass them. “Technology has unlocked doors and facilitated a genuine democratization of our culture,” he writes. You don’t need anyone’s permission to start an online movement: it was ordinary people who stepped out of their comfort zone to recruit Jim Webb for the US Senate, create MoveOn, and launch an annual blogger convention that culminated with Netroots Nation.

What activists need to understand, said Moulitsas, is what technology medium is most effective in their time period at getting out a message that will influence conventional wisdom. Gandhi used newsreels to push the narrative that the British were exploiting the Indian people. Television helped dramatize the civil rights movement in the 1960’s that galvanized a country to its cause. But the era of mass visual rallies that grab attention on the evening news are over, he says. Another thousand people in the street just isn’t news today.

In fact, Moulitsas is very critical of anti-war activist Cindy Sheehan – because she too quickly fell into the obsolete model of ‘60s protest no longer conducive for the digital era. After activists spent years marching in the streets against the Iraq War without changing public opinion, Sheehan’s plea to meet President Bush in Crawford, Texas put on a human face that most Americans could relate to. But once Camp Casey became a circus for every left-wing group, it devolved into the same type of ineffectual protest we’ve all seen before.

The book’s passage on Camp Casey is likely to infuriate Code Pink (the first group that set up camp with Sheehan), which Moulitsas describes their set-up as “neon pink banners, tables and paraphernalia, in the manner of a corporate sponsor at a sports facility.” But his point is well taken: Sheehan’s failure to keep a disciplined message allowed the protest to become yet another anti-war rally that the public had long since seen time and again.

Moulitsas also criticizes Sheehan because she violated a cardinal rule of activism: keep your ego in check. Sheehan failed to understand that, while she was an important part of the anti-war movement, it was more than just about her. “This wasn’t the world of the ‘60s where we needed Walter Cronkite and visible antiwar national leaders to captivate media coverage,” he writes. “In today’s fragmented world thousands of people were doing their part, aided by the tragic reality of Iraq, toward changing public opinion.”

Bloggers are not likely to be egomaniacs, argues Moulitsas, because “there’s virtually no danger of living in a bubble surrounded by sycophants. Every time I write anything on my own site, I have dozens of people telling me what an idiot I am.” I’m a bit skeptical about that point. While bloggers do face criticism every day, blogs can also foster a “navel-gazing” atmosphere of self-congratulation and inflated importance. Even with a democratized activism online where anyone can be a “leader,” those who strive to be effective can’t take themselves too seriously. It’s important to stay grounded with the offline world.

One place where Moulitsas will get in trouble with local Bay Area activists is on the battle for a transgender-inclusive ENDA. Urging progressives to take a long-term approach and pick their battles, Moulitsas faults the “all-or-nothing” line that LGBT activists took against the Human Rights Campaign for pushing an anti-discrimination law on sexual orientation – but not gender identity. His general advice on incremental progress is sound, but he failed to consider specific facts around ENDA that didn’t make it all that simple.

First, Moulitsas says transgenders “had come late to the battle” – which is simply untrue. Three years before Stonewall, it was trannies who staged the Compton Cafeteria Riots in San Francisco. Second, an incremental strategy may have earned the trust of the LGBT community – if the Human Rights Campaign did not have such an “inside-the-Beltway” track record of endorsing Republican legislators. Moulitsas actually mentions HRC’s tendency to do so when he criticizes environmental and pro-choice groups for doing the same thing (an utterly doomed strategy) – but he never makes the connection as to how this practice played a role with ENDA.

Nevertheless, Moulitsas has written a compelling book that illustrates the democratizing impact that digital media has had on political activism, and offers sound advice for how to navigate this medium for your cause. His passage on crafting a narrative and handling your opponents is especially instructive in our fast-moving news cycle where bloggers must stay on the ball, and he gives plenty of anecdotal examples that keep it entertaining.

Taking On the System hits the bookstores on August 20th, and is now available for pre-order online. It should be equally successful – if not more so – than Moulitsas’ first book, which was also worth reading.

Find Taking On the System at Amazon.com.