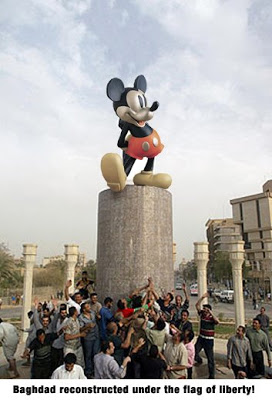 “I’m a businessman. I’m not here because I think you’re nice people. I think there’s money to be made,” explained Llewellyn Werner in his pitch for a vast recreational complex to be built in, of all places, Baghdad. “I also have this wonderful sense that we’re doing the right thing — we’re going to employ thousands of Iraqis. But mostly everything here is for profit.”

It has come to this. We’re not even pretending anymore. As the years, memories and excuses have fallen away like dead skin, America’s invasion of Iraq has revealed itself for what it truly is: a consumerist pipe dream. The Great American Mall of the Middle East. Disneyland in the desert.

And since we’re already giving away billions in duffel bags, why not throw another billion or two down the money pit? Where there’s funding, there is fire. And in the case of the Baghdad Zoo and Entertainment Experience (BZEE), there may also be firefights. If you can ignore the bullets, IEDs, power outages and, well, the entire occupation, you might just have yourself a good time.

“In Southern California, there’s drive-bys and everything else,” reasoned Ride and Show Engineering Executive Vice President John March, whose company has been contracted to develop the site, which is adjacent to the Green Zone and fast-tracked by the Pentagon. “So there’s danger everywhere. I think the key thing is this will be tremendous for Baghdad,” he explained to Fox News chatterhead Bill Hemmer.

If by “tremendous” he means a huge target, then March, who refused to participate in this article, is dead right. It is also financially tremendous for C3, the hedge fund holding company that Werner oversees: Already given a green light from the Pentagon and an endorsement from Gen. David Petraeus, Werner secured a 50-year lease on what used to be acreage containing Baghdad’s looted and left-for-dead zoo for “an undisclosed sum,” according to the UK’s Times Online. He is quickly building everything from a skate park, museum, concert arena and rides to future diversions. So far, Werner has collared $500 million from his elusive investors, who are practically impossible to find (a rarity in the Internet age) and secured joint partnerships across Iraq for a variety of projects. The million-dollar skate park is scheduled to open this month, and further hotel and housing developments will follow, especially since Werner has exclusive rights to them.

And although they may be managed by Iraqis, their profits belong to America. Just like most of country’s oil reserves.

“Even the idea of bringing U.S.-style escapism entertainment to the hell of Baghdad is absurd,” explains author and journalist Dahr Jamail, who, unlike the majority of his peers, has actually ventured outside the Green Zone without being embedded in a military detail. “Just watch how much of this infrastructure even gets built.”

That’s just the beginning of the problems, explains journalist Sharon Weinberger, who covers the Pentagon and other disaster capitalist complexes for Wired’s Danger Room. (Full disclosure: I cover music for Wired’s Listening Post.) The BZEE may get built after all, but who’s to say it’ll be left standing when the smoke clears?

“Even if they do pull this off, then the park’s immediate survival, like any private business, is going to depend on stability and the ability of the Iraqi government to control violence and ensure public safety,” Weinberger says. “If the situation in Baghdad deteriorates, I think the idea that the park will somehow be spared violence is, sadly, naive at best.”

What seems most naive, however, is the idea that any American business venture launched in the miasma of Iraq’s reconstruction is dealing in good faith. From Halliburton to Bechtel and on to Blackwater and beyond, the place has been an epicenter of fraud and corruption, and that’s just the so-called private sector. Our collective public enterprise has been as daunting a failure: So far, the war has cost hundreds of billions in dollars and hundreds of thousands of lives. By the time it’s all over, those numbers could skyrocket, and the last thing anyone is going to want is a Los Angeles hedge fund looking to stash its money in a private-public partnership that serves no real purpose.

Even though Werner landed the acreage with the blessing of Iraqi politicians and officials, it was not them who shut down the nation’s state-owned factories after the invasion. That was L. Paul Bremer, a U.S. official in charge of the pillage. In other words, if America and its business partners want the BZEE bad enough, they will get it. No questions asked.

And it is leading to further criticism that American economic interests are living in Disneyland, rather than looking to build one in the most dangerous metropolis in the entire Middle East.

“The Bush junta has already attempted to impose a neo-liberal economic Disneyland upon the Iraqi people,” Jamail asserts, “but they have flatly rejected the neurosis of its brand-conscious, failed capitalism. The two geographies meet nowhere in my imagination, nor in reality. The not-so-Green Zone is barely inured from the death, destruction and suffering which surrounds it. The point is that no gated community is safe from mortars and rockets. I believe we are looking at the next evolution of the gated community, albeit grossly failed.”

With one caveat: Failure is merely the end of this economic stratagem, not its beginning. It has all the earmarks of a successful scam, from its suspicious fast-tracking all the way down to its undisclosed sums changing hands over territories that once belonged to someone else and may indeed be taken back by force shortly after the ink on the contracts dries. It is enough for some economic players to merely get something this compromised off the ground; success is a mere side effect to the financial interchange, which will have already taken place and been pocketed once the BZEE is judged an unmitigated disaster. Just like the invasion itself.

Milo Minderbinder would be proud. It’s like his chocolate-covered cotton, only vastly more lethal.

“I think I’d file this under ‘zoo allegory,'” Weinberger concludes. “People are fascinated by the effects of wars on zoos. Think of Emir Kusturica’s 1995 movie, ‘Underground,’ or Marjan, the one-eyed lion of the Kabul zoo. Right now, people are following this as a ‘News of the Weird’ story, but I hope you or someone revisits it in a few years. If the Baghdad Zoo and Entertainment Experience is thriving and Iraqis are visiting, then it will be a wonderful testament to the country’s progress. If, however, it’s an empty space, then it will be a testament to a larger self-delusion.”