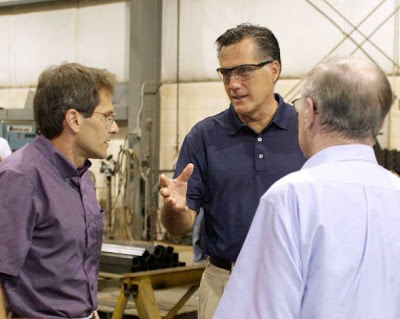 Some things just drive you nuts.

Romney and the owners, Doug and Steve Cohen, held a typical photo op. Mitt took the occasion to blast both Obama and “government” as “bad for business.”

Really? What did Mitt have in mind? A wimpy stimulus package? A failure to build more infrastructure? In that case, he might have a point.

But no, the real problems are environmental regulation, labor safety codes, and health care. In other words, with more pollution and more unsafe conditions at work, and less health care to deal with the consequences, business could surge ahead.

There’s not any truth to that claim, but that’s not the worst of it.

First, there’s the irony that Obama’s health care plan is basically a national version of Romney’s Massachusetts Plan. If we could scrap both and replace them with “Medicare for All,” yes, it would be better for both workers and business — save for the health insurance firms.

But the real clincher is the story of Screen Machines, where Mitt, the tough-minded, pragmatic business guy candidate, was delivering his words of economic wisdom. Here’s the Washington Post on the topic:

Yet it’s been the government — and Obama’s policies in particular — that has helped propel Screen Machine’s growth at its sprawling new headquarters here, even during the recession. The company, which builds heavy-duty crushing and screening machines used in construction, mining and recycling, received four stimulus awards totaling $218,607. It is also benefiting from a 10-year deal with local and state governments to not pay taxes on its property, equipment or inventory, according to public records.”

We need to make a minimum requirement of all elected officials that they at least have the ability to blush when feeding us a lot of nonsense. Of course, that might wipe out most of Congress, and a few in the White House, too. But then we’d have some open slots for politicians who count voters rather than dollars.

[Carl Davidson is a national co-chair of the Committees of Correspondence for Democracy and Socialism, a national board member of Solidarity Economy Network, and a local Beaver County, PA member of Steelworkers Associates. In the 1960s, he was a national leader of SDS and a writer and editor for the Guardian newsweekly. He is also the co-author, with Jerry Harris, of CyberRadicalism: A New Left for a Global Age. He serves as webmaster for SolidarityEconomy.net and Beaver County Blue, where this article was first published. Read more articles by Carl Davidson on The Rag Blog.]