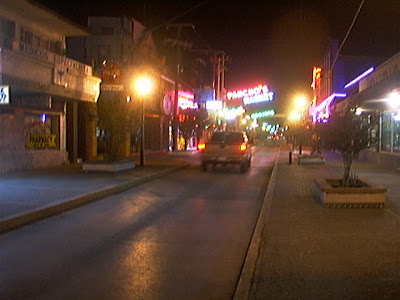 Ciudad Acuña in 2001. Image from michaelbluejay.
Ma Crosby’s and Ciudad Acuña:
A slow death on the border?

Today we were the second customers all day at Crosby’s. A Freddy Fender song in the background trailed into Shawn Sahm doing his version of his dad’s ‘Hey Baby Que Pasó?’

I was in Ciudad Acuña the other day. Drove down after the rainstorm. Rae and I had lunch at our favorite eatery, Ma Crosby’s, an institution that I have gone to for 30 years, maybe more. I was an off and on customer. Crosby’s was one of those places that you could count on being there for you to enjoy.

In the spring of 1997 I took Rae there for the first time. The place was packed and we had to wait for a table. Mariachi bands were strolling and lots of people were having a ball. The back room which I always presumed was for banquets was even open. They were doing a land office business. People waiting for a table could entertain themselves viewing the large collection of famous and not so famous photographic prints of the 1910 Mexican Revolution.

The Crosby place was at least as famous as the Cadillac Bar in Nuevo Laredo. The menu was ponderous, they served stuffed quail, lovely fresh water fish caught locally from Lake Amistad, there were great frog legs as well as normal fair. The steaks were outstanding, especially the steak Tampiquena — a meal not for the faint of heart.

The bartenders prepared superior margaritas in huge tumblers; the drinks were made from scratch, not a mix. One of the bar helpers was always busy squeezing a zillion limes into a cauldron and then moving the juice to pitchers.

Then 9-11 happened. We were on Mt. Arenal in Costa Rica. The Costa Ricans weren’t all that excited by the disaster. Little did we know how that event would have a dilatory effect on Ciudad Acuña. It would be a slow painful death to a flourishing economy. 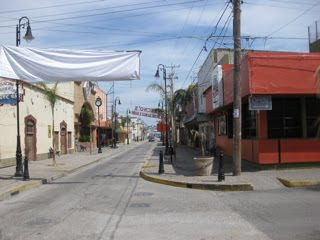 Ciudad Acuña on a recent Friday evening. Photo by Charlie Loving / The Rag Blog.
We moved to West Texas (Deer Corn) in 2005, to the house we built on the headwaters of the Nueches. Part of our ritual was to drive to Del Rio and Acuña at least once a month. We shopped and went to the liquor stores and the commissary at Laughlin Air Force Base. We found our brand of tequila at only one upscale restaurant and liquor store.

Things seemed to be OK but there was an underlying tension. The clientele seemed smaller, with fewer tourists milling around.

I spent a few months on a radio talk show there, appearing once a week with the out-of-town view. My friend Jay’s B&B was struggling but hanging in there. I talked to the Mexican tourismo guy who was upbeat and had great plans. Coahuila was a great state with lots to do. They had a cockamamie idea of “running the cows.” A fun thing to attract people, which sort of worked.

Then came the passport thing. A derivative of 9-11. And of course all the narco violence. By my gauge, Crosby’s was beginning to show a steep drop in attendance.

The other place, Manuel’s, started to collapse too.

The old man died and the daughter closed the best liquor store in Acuña.

A slow death was beginning. The shoe shine guys disappeared. The chicle kids disappeared. There were fewer taxi cabs and the vendors of trinkets evaporated. Famous bars closed. Bars that had been on the main street for half a century shut their doors. “Se vende” signs sprouted. Small and large businesses were boarded up or put up for sale. The streets which had teemed and been vibrant were now deserted. I heard the nefarious red light district was in decline. Mexico was “OFF LIMITS” to the thousand airmen at Laughlin. The music had stopped.

Then the passport thing really kicked in and that may well have been the final nail in the coffin.

Today we were the second customers all day at Crosby’s. A Freddy Fender song in the background trailed into Shawn Sahm doing his version of his dad’s “Hey Baby Que Pasó?” Francisco the old waiter sat with us and said he thinks it is over. Yesterday there were no customers he said, and the night shift is worse. Francisco gets off at four and the other guys work from then to midnight. The place has 60 tables. The napkins are now paper instead of cloth. The bar is open but there are no drinkers. A sadness permeates the place.

The mole was still good, amazing. Francisco has one year until retirement. His wife has fled the country to Indiana. His kids are all in Eagle Pass, all graduated from American colleges, one is a doctor. His grandkids are all in the states. He says he will keep his house. Mexico is his home but the “gringos” with their love of drugs and their paranoia have killed the border and perhaps the country.

Do we care? I doubt it. Do I care? Yes, but what can I do? I can go and buy a taco but the fear plague has set in and may never be cured.

[Charlie Loving is a cartoonist who lives in Deer Corn, Texas.] 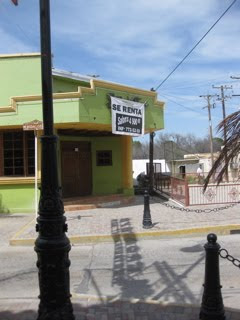 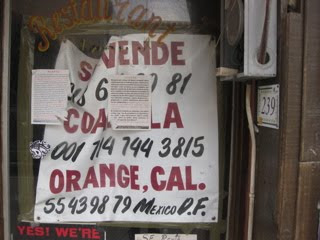