Children of Inmates: A Problem Needing a Solution 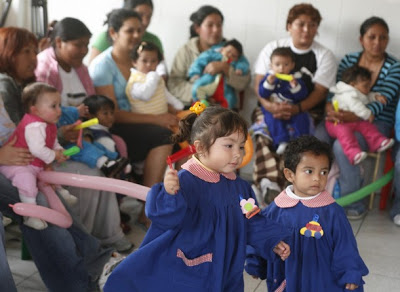 Children of inmates play during a party for the children inside Santa Monica women’s prison in Lima, September 25, 2008. The prison allows children of the inmates to stay with their mothers till they are three years old. There are currently 50 children in the prison. Photo: Reuters Pictures.
Julia Steiny: Zero-tolerance policies wreak havoc on children’s education
By Julia Steiny / March 29, 2009

There are children who matter so little that no government agency even bothers to count or keep statistical track of them. They are the children of prisoners. Nationally, the justice systems have no interest in how children or families are affected by an offending parent’s imprisonment. The state ensures that the sins of the father are visited upon the son.

The number-one predictor of a child going to prison is having had a parent in prison.

The number-one drag on a child’s academic success is family chaos of any kind. And nothing is as chaotic as having a parent yanked out of their lives and branded as a convict.

Sen. Leo Blais, D-Coventry, has submitted Bill S0320 to the General Assembly, to reduce the penalty for possession of less than an ounce of marijuana to a fine of $100. Excellent. Hopefully this bill will pass. Hopefully it will start a trend of rethinking all of the state’s morally-righteous but destructive laws that don’t take families into account.

The 1990s surge of harsh zero-tolerance laws stuffed the U.S. prisons to the point where we lock up a higher percentage of our own people than any other country in the world. Some unlucky inmates got caught with an ounce or less of marijuana. In Rhode Island, 89 percent of the marijuana arrests are for possession. Is passing a joint among friends that much more pernicious than sharing a bottle of wine?

Well, some would say marijuana is the gateway to more serious drug use.

Sol Roderiquez, director of the Family Life Center in South Providence, would say, “Incarceration itself leads to worse drugs, often worse crimes. And with a prison record, it’s so hard for an ex-offender to get a job, crime is one of the few options left.” And so the cycle continues.

The Family Life Center helps ex-cons piece their shattered lives back together so they can live in the mainstream again.

According to the 2007 Pew prison report, Rhode Island spends $44,860 a year per inmate — the highest in the country. And that doesn’t include the court costs.

But neighboring Massachusetts passed a law similar to Blais’ that will save their taxpayers almost $30 million a year in arrests, bookings, and basic court costs alone. Eleven other states have also passed such laws. Vermont is considering one now.

Blais’ bill is not legalization of marijuana, but decriminalization. The mom, dad, uncle, or sister caught with a joint won’t have a criminal conviction on their record that makes supporting a family with legitimate work nigh impossible.

According to a survey done by RI Kids Count, as of Sept. 30, 2007, roughly two-thirds of the 3,081 inmate responders had children — 4,520 children, to be exact. When the parent goes to jail, many children go into foster or residential care, or stay with relatives who resent the unasked-for burden and cost. Families split up. Children act out. The stress is intense.

Roderiquez says, “When the state imposes such a severe punishment, it should take the whole family into account. Prison has huge consequences for the whole family. But we’ve dehumanized this population. They don’t have feelings or respond emotionally. No one pays attention to the fact that we’re pushing the families into falling apart.”

Roderiquez and her colleague Nick Horton, policy researcher at the center, have seen it all, and rattled off story after story.

There was the family with three daughters. When the husband and breadwinner went to prison, the mother went on welfare. In time, the youngest child had to be treated for post-traumatic stress disorder, and the oldest became a classically enraged young adolescent, getting involved in serious escapist bad habits. All three girls’ grades at school have tanked. Roderiquez and Horton add that children’s grades always suffer. Always. “It’s the first thing to go,” said Roderiquez.

Then there was the single father responsible for two children. When he went to prison, one dropped out of school immediately, and the other ran away.

I’ll gladly stipulate that smoking dope could be an indicator of growing or potentially dangerous social behavior. But wouldn’t it be more effective in the long run, more healing for everyone, to send a family-services worker to the home to help those families who are in fact dangerously drug-involved? The City of Providence has a nationally recognized “go-team” of family-service workers whom the police call to crime scenes when children are present or a family is traumatized. Use them for marijuana busts. If you must punish the offender, revoke a bit of the family’s privacy by investigating whether a family has unhealthy stresses driving the drug use. If we’re serious about “corrections,” the only real way to correct misbehavior is to get to the root cause, which prison does not.

When the best solution to a social problem is treatment, provide treatment. It’s cheaper than courts and prisons, healthier, and more long-lasting. For my money, the state should look at all their laws with an eye to the collateral damage that harsh penalties cause to an offender’s extended community. Is the damage worth it? Sometimes prison is necessary, but often it’s just vindictive.

And for heaven’s sake, start collecting data on the inmates’ children. Bring those children to light. They are our responsibility.

[Julia Steiny, a former member of the Providence School Board, consults for government agencies and schools; she is codirector of Information Works!, Rhode Island’s school-accountability project. She can be reached at juliasteiny@gmail.com, or c/o EdWatch, The Providence Journal, 75 Fountain St., Providence, RI 02902.]

2 Responses to Children of Inmates: A Problem Needing a Solution