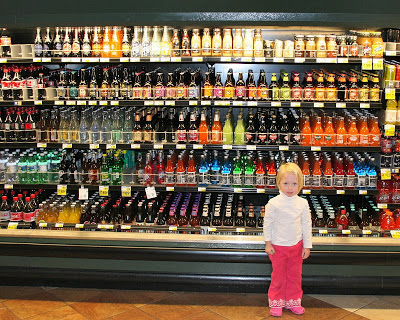 After World War II, starvation was a real danger, and calories were in short supply. The United States Dept of Agriculture put in place subsidies to grow calories, which have evolved to this day to a system exactly contrary to what is needed. 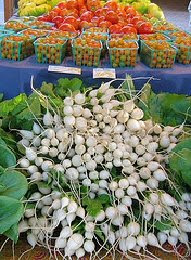 The United States Department of Agriculture itself says that Americans consume only 11 % of the fruits and vegetables needed for good health, while consuming way too many calories in the form of fats and sugars.

Yet this same USDA gives massive subsidies to the calories, following its historic mandate back from WW II, while less than one percent goes to fruit and vegetable farmers.

Many people make their grocery choices based on price, and the subsidized empty calories, fried foods, processed foods are the best buy.

Most of these subsidies go to farmers in the Mississippi River basin, the source of seventy five percent of the nitrate pollution that is killing the Gulf of Mexico. 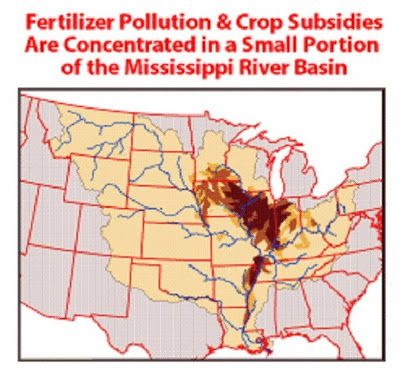 So to make MacDonalds burgers and fries and Cokes cheap, we are sacrificing our greatest fishery, the shrimp, oysters, crabs and fish of the Gulf of Mexico. The Dead Zone gets bigger and bigger every year, and soon we will cross the point of no return and the fish just won’t come back. Besides killing the Gulf of Mexico, this same process of Government subsidized nitrate, herbicide, pesticide cultivation is killing fisheries around the world. The United Nations Environmental Group says that nitrates are the biggest threat to our oceans, ahead even of over fishing. Millions of people in the United States drink water with unsafe levels of nitrates, herbicides, and pesticides, a major cause of our cancer epidemic. 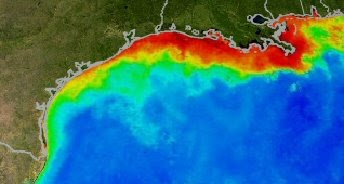 Our agriculture is constantly touted as “efficient”, but the measure Big Ag likes to use is how many bushels are produced per acre, ignoring the lack of nutrients and corresponding epidemic rise in chronic disease of our population. This subsidized food is itself one cause of our cancer epidemic, according to the President’s Cancer Panel. With Lance Armstrong on the panel, their report states that “we heavily subsidize the growth of foods (e.g., corn, soy) that in their processed forms (e.g., high fructose corn syrup, hydrogenated corn and soybean oils, grain-fed cattle) are known contributors to obesity and associated chronic diseases, including cancer.” 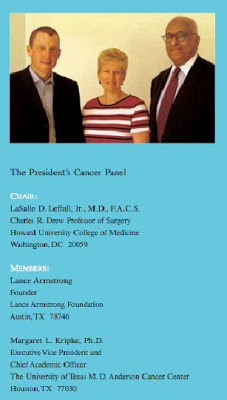 The so called “efficiency” of our chemical agriculture also ignores the massive amount of water wasted (many cities along the Mississippi don’t have safe drinking water), as well as the sacrifice of our best fisheries. It ignores the green house gases caused by giant tractors plowing the earth and removing the mulch, which sequesters the CO2 in the ground. And it ignores the loss of our farmers and farming communities, as farmers who use sustainable methods such as crop rotation, or who grow food for the table rather than for the factories, do not get the subsidies and cannot compete against those who do.

This is the major cause of the unprecedented immigration from South America to the United States, and from Africa to Europe.

What is the alternative?

We could take the entire $50 Billion dollar subsidy that now goes to mega corporate junk food agriculture and divide it up locally.

Instead of depending on nitrates from the Middle East, we could use the sun. In a city of one million people, dividing the $50 billion dollars annually by 300 million people, that would be $166 a person, so $166 million dollars A YEAR to subsidize a local agriculture. Fresh fruits and vegetables that the government says we need to be eating to be healthy would suddenly be cheap and plentiful. Local agriculture would be cost effective. New Jersey could once again be the garden state. Pastures will lock the green house gases in the earth where they belong, and the fats from pastured animals are the ones we need for health, as opposed to the “bad” fats created by feeding corn to animals intended for lives led in the grassy fields.

By the simple matter of transferring the agricultural subsidy to a fruit, vegetable, pasture and orchard based agriculture, we can reverse the modern epidemics of diabetes and heart disease, reverse global warming, save our drinking water and our oceans, and stop the massive unprecedented immigration caused by driving small farmers off their land. This type of thinking is underway with new Obama appointee Vilsack at the USDA who proposes giving farmers carbon credits where deserved. This would bring us back around to a sustainable and wholesome agriculture.

This entry was posted in RagBlog and tagged Agriculture, Food Production. Bookmark the permalink.