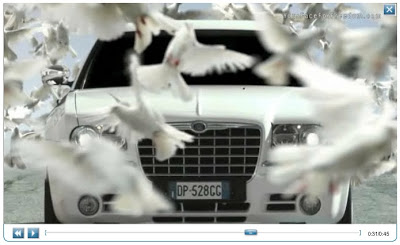 A truly uplifting 45 second public service television spot features a new Chrysler 300 breaking through the Berlin wall with the flying stones turning into white doves. No overt sales pitch for Chrysler is made at all, but the fact that an appeal for international peace and freedom is being made by Chrysler may be one of their strongest company messages in a while.

However, their long time U.S. ad agency, BBDO, is crying foul because Chrysler Group’s Olivier Francois, the new president-CEO of the Chrysler vehicle brand, hired an Italian ad agency to produce the spot, which is very similar to a Lancia commercial from a year ago. Lancia is part of the Fiat group.

Francois commented in a press release, “For Chrysler, this is a chance to use our brand image to join with others in the fight for peace and to knock down the walls that divide us. We at Chrysler believe in doing the right thing and making a difference.”

The Italian cinematography celebrates Chrysler visually while delivering a strong message for achieving world peace. The spot ends with a call for the release of Aung San Suu Kyi, Burma’s immobilized pro-democracy leader. She is a Nobel Peace Prize Laureate, who has been in and out of house arrest since 1989.

The Chrysler message supports the 10th World Summit of Nobel Peace Laureates being held in Berlin December 10-11, 200, coinciding with the 20th anniversary of the fall of the Berlin wall, as well as an international internet campaign to free Nobel Laureate Aung San Suu Kyi.

BBDO’s contract with Chrysler runs out at the end of next month, and trade publication Advertising Age, had a banner headline today proclaiming, “After Taking U.S. Bailout, Chrysler Hires Italian Agency.” A former Chrysler Group marketing chief, Julie Roehm, blasted the international peace message noting that “social causes have a place in advertising,” but not this one.

“The message is a disconnect to what matters to people here,” she said. Americans are focused now on getting back to work and the economy back on track, she said. “I don’t think the vast majority of Americans know who this woman is or frankly care.”

To Ms. Roehm there apparently is no greater cause for concern than envisioning out of work BBDO staffers at the end of January being forced to pound the pavement in New York City. An international internet awareness effort, Your Face For Freedom, is raising support, money and global awareness for “this woman” for whom Ms. Roehm, in her narrow nearsightedness exhibits such crass indifference.

If she and her chums at BBDO had been doing a more far-sighted job for Chrysler, BBDO might not be losing their contract and Chrysler might not have had to be saved from collapse which involved getting rid of ineffective executives and replacing them with new leadership.

The U.S. financing was loaned to Chrysler to allow it to reorganize and emerge from bankruptcy, which it accomplished in record time. New robust changes are but the beginning of what could eventually see Italy’s Fiat with a 51% ownership of the new Chrysler Group LLC, “if it meets financial and developmental goals for the company.” And those goals center upon revitalizing its manufacturing facilities, parts suppliers and work force in the USA as well as abroad.

Starting to make Chrysler a name known and respected in European and other international markets is what this powerful TV imagery is beginning to do. A friend of mine in Italy who saw the spot emailed me saying, “I think it’s great and almost enough to get me to buy a Chrysler! ALMOST — can I trade in my 2003 Fiat Punto???”

Take a look at the Chrysler spot and see what your gut reaction is.