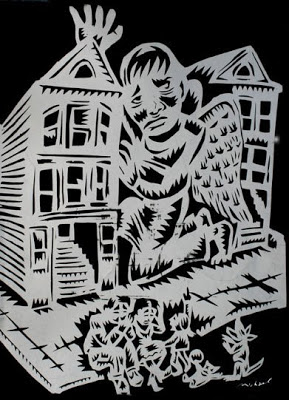 The Angel of Gentrification.
The demographic inversion of the American city
by Alan Ehrenhalt

Thirty years ago, the mayor of Chicago was unseated by a snowstorm. A blizzard in January of 1979 dumped some 20 inches on the ground, causing, among other problems, a curtailment of transit service. The few available trains coming downtown from the northwest side filled up with middle-class white riders near the far end of the line, leaving no room for poorer people trying to board on inner-city platforms. African Americans and Hispanics blamed this on Mayor Michael Bilandic, and he lost the Democratic primary to Jane Byrne a few weeks later.

Today, this could never happen. Not because of climate change, or because the Chicago Transit Authority now runs flawlessly. It couldn’t happen because the trains would fill up with minorities and immigrants on the outskirts of the city, and the passengers left stranded at the inner-city stations would be members of the affluent professional class.

In the past three decades, Chicago has undergone changes that are routinely described as gentrification, but are in fact more complicated and more profound than the process that term suggests. A better description would be “demographic inversion.” Chicago is gradually coming to resemble a traditional European city–Vienna or Paris in the nineteenth century, or, for that matter, Paris today. The poor and the newcomers are living on the outskirts. The people who live near the center–some of them black or Hispanic but most of them white–are those who can afford to do so.

Developments like this rarely occur in one city at a time, and indeed demographic inversion is taking place, albeit more slowly than in Chicago, in metropolitan areas throughout the country. The national press has paid very little attention to it. While we have been focusing on Baghdad and Kabul, our own cities have been changing right in front of us.

Atlanta, for example, is shifting from an overwhelmingly black to what is likely to soon be a minority-black city. This is happening in part because the white middle class is moving inside the city borders, but more so because blacks are moving out. Between 1990 and 2006, according to research by William Frey of the Brookings Institution, the white population of Atlanta has increased from roughly 30 percent to 35 percent while the black population has declined from 67 percent to 55 percent. In this decade alone, two of Atlanta’s huge suburban counties, Clayton and DeKalb, have acquired substantial black majorities, and immigrants arriving from foreign countries are settling primarily there or in similar outlying areas, not within the city itself. The numbers for Washington, D.C. are similar.

Race is not always the critical issue, or even especially relevant, in this demographic shift. Before September 11, 2001, the number of people living in Manhattan south of the World Trade Center was estimated at about 25,000. Today, it is approaching 50,000. Close to one-quarter of these people are couples (nearly always wealthy couples) with children. The average household size is actually larger in lower Manhattan than in the city as a whole. It is not mere fantasy to imagine that in, say, 2020, the southern tip of Manhattan will be a residential neighborhood with a modest residual presence of financial corporations and financial services jobs. What’s happening in Lower Manhattan isn’t exactly an inversion in the Chicago sense: Expensive condos are replacing offices, not poor people. But it is dramatic demographic change nevertheless.

If you want to see this sort of thing writ large, you can venture just across the Canadian border to Vancouver, a city roughly the size of Washington, D.C. What makes it unusual–indeed, at this point unique in all of North America–is that roughly 20 percent of its residents live within a couple of square miles of each other in the city’s center. Downtown Vancouver is a forest of slender, green, condo skyscrapers, many of them with three-story townhouse units forming a kind of podium at the base. Each morning, there are nearly as many people commuting out of the center to jobs in the suburbs as there are commuting in. Two public elementary schools have opened in downtown Vancouver in the past few years. A large proportion of the city’s 600,000 residents, especially those with money, want to live downtown.

No American city looks like Vancouver at the moment. But quite a few are moving in this direction. Demographic inversions of one sort or another are occurring in urban pockets scattered all across America, many of them in seemingly unlikely places. Charlotte, North Carolina, is in the midst of a downtown building boom dominated by new mixed-use high-rise buildings, with office space on the bottom and condos or rental units above. Even at a moment of economic weakness, the condos are still selling briskly.

We are not witnessing the abandonment of the suburbs or a movement of millions of people back to the city all at once. But we are living at a moment in which the massive outward migration of the affluent that characterized the second half of the twentieth century is coming to an end. For several decades now, cities in the United States have wished for a “24/7” downtown, a place where people live as well as work, and keep the streets busy, interesting, and safe at all times of day. This is what urbanist Jane Jacobs preached in the 1960s, and it has long since become the accepted goal of urban planners. Only when significant numbers of people lived downtown, planners believed, could central cities regain their historic role as magnets for culture and as a source of identity and pride for the metropolitan areas they served. Now that’s starting to happen, fueled by the changing mores of the young and by gasoline prices fast approaching $5-per-gallon. In many of its urbanized regions, an America that seemed destined for everincreasing individualization and sprawl is experimenting with new versions of community and sociability.

Why has demographic inversion begun?

For one thing, the deindustrialization of the central city, for all the tragic human dislocations it caused, has eliminated many of the things that made affluent people want to move away from it. Nothing much is manufactured downtown anymore (or anywhere near it), and that means that the noise and grime that prevailed for most of the twentieth century have gone away. Manhattan may seem like a loud and gritty place now, but it is nothing like the city of tenement manufacturing, rumbling elevated trains, and horses and coal dust in the streets that confronted inhabitants in the early 1900s. Third-floor factory lofts, whether in Soho or in St. Louis, can be marketed as attractive and stylish places to live. The urban historian Robert Bruegmann goes so far as to claim that deindustrialization has, on the whole, been good for downtowns because it has permitted so many opportunities for creative reuse of the buildings. I wouldn’t go quite that far, and, given the massive job losses of recent years, I doubt most of the residents of Detroit would, either. But it is true that the environmental factors that made middle-class people leave the central city for streetcar suburbs in the 1900s and for station-wagon suburbs in the 1950s do not apply any more.

Nor, in general, does the scourge of urban life in the 1970s and ’80s: random street violence. True, the murder rates in cities like Chicago, Philadelphia, and Cleveland have climbed in the last few years, but this increase has been propelled in large part by gang- and drug-related violence. For the most part, middle-class people of all colors began to feel safe on the streets of urban America in the 1990s, and they still feel that way. The paralyzing fear that anyone of middle age can still recall vividly from the 1970s–that the shadowy figure passing by on a dark city street at night stands a good chance of being a mugger–is rare these days, and almost nonexistent among young people. Walk around the neighborhood of 14th and U streets in Washington, D.C. on a Saturday night, and you will find it perhaps the liveliest part of the city, at least for those under 25. This is a neighborhood where the riots of 1968 left physical scars that still have not disappeared, and where outsiders were afraid to venture for more than 30 years.

The young newcomers who have rejuvenated 14th and U believe that this recovering slum is the sort of place where they want to spend time and, increasingly, where they want to live. This is the generation that grew up watching “Seinfeld,” “Friends,” and “Sex and the City,” mostly from the comfort of suburban sofas. We have gone from a sitcom world defined by “Leave It to Beaver” and “Father Knows Best” to one that offers a whole range of urban experiences and enticements. I do not claim that a handful of TV shows has somehow produced a new urbanist generation, but it is striking how pervasive the pro-city sensibility is within this generation, particularly among its elite. In recent years, teaching undergraduates at the University of Richmond, the majority of them from affluent suburban backgrounds, I made a point of asking where they would prefer to live in 15 years–in a suburb or in a neighborhood close to the center of the city. Few ever voted for suburban life.

I can’t say that they had necessarily devoted a great deal of thought to the question: When I asked them whether they would want to live in an urban neighborhood without a car, many seemed puzzled and said no. Clearly, we are a long way from producing a generation for whom urban life and automobile ownership are mutually exclusive. In downtown Charlotte, a luxury condominium is scheduled for construction this year that will allow residents to drive their cars into a garage elevator, ride up to the floor they live on, and park right next to their front door. I have a hard time figuring out whether that is a triumph for urbanism or a defeat. But my guess is that, except in Manhattan, the carless life has yet to achieve any significant traction in the affluent new enclaves of urban America.

Not that cars and the demographic inversion aren’t closely related; they are. In Atlanta, where the middle-class return to the city is occurring with more suddenness than perhaps anywhere in the United States, the most frequently cited reason is traffic. People who did not object to a 20-mile commute from the suburbs a decade ago are objecting to it now in part because the same commute takes quite a bit longer. To this, we can add the prospect of $5-per-gallon gasoline. It’s impossible at this point to say with any certainty just what energy costs will do to American living patterns over the next decade. Urbanists predicted a return to the city during previous spikes in the cost of gasoline, notably during shortages in the 1970s. They were wrong. Gas prices came down, and the suburbs expanded dramatically. But today’s prices at the pump are not the result of political pressures by angry sheiks in the Persian Gulf. They are the result of increased worldwide demand that is only going to continue to increase. Some suburbanites will simply stay where they are and accept the cost. But many will decide to stop paying $100 every few days for a tank of gasoline that will allow them to commute 40 or 50 miles a day, round-trip.

Read all of this article here. / The New Republic