Guantanamo : Two Trials in One 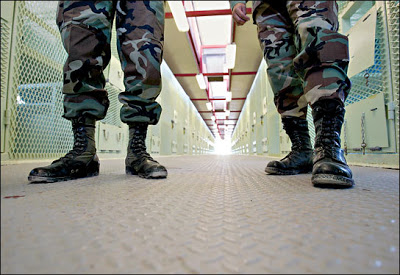 GUANTÁNAMO BAY, Cuba — On the surface, the proceedings unfolding inside a makeshift courthouse on a hill here resemble an American trial. A judge wearing a black robe presides. There is a public gallery and a witness stand. Prosecutors present witnesses, and defense lawyers cross-examine them. Objections are made and ruled upon.

But behind the judicial routine at the first trial for a Guantánamo detainee lies a parallel universe of law and lawyers. Secret evidence held in red folders is not revealed in open court. The gallery is mostly empty, because there are no members of the public. In what would be the jury box, every occupant wears a military uniform.

In the first week of the trial of Salim Hamdan, Osama bin Laden’s driver, law enforcement officials recounted what he had said during interrogations in the years since he was detained in 2001. But it was also disclosed that some of the interrogations had been conducted in the middle of the night and by men wearing masks, and that Mr. Hamdan did not have a lawyer during those sessions, nor was he warned that he might be prosecuted.

Mr. Hamdan’s trial is, in a sense, two trials. Mr. Hamdan is being tried on accusations of conspiracy and material support of terrorism. And the Bush administration’s military commission system itself is on trial. After years of debate, protest and litigation, the legal standing of the tribunal system at Guantánamo remains a question for American courts and officials around the world.

The chief Guantánamo prosecutor, Col. Lawrence J. Morris of the Army, said this first Guantánamo tribunal was “the most just war crimes trial that anybody has ever seen.”

Matt Pollard, a legal adviser for Amnesty International who is an observer here, sees it differently. He said he was struck by a sense that the proceedings were more of a replica of a trial than a real one.

“We are within a frame of a beautiful picture,” created by the Pentagon, Mr. Pollard said. “When you’re inside that frame, everything looks nice.”

The Guantánamo legal system was intended to try “unlawful enemy combatants” caught on the post-Sept. 11 battlefield. Prosecutors say there is little room for the usual legal restrictions in interrogations intended to prevent a terrorist attack. The administration’s strategy in using the Guantánamo naval station was based on its belief that the Constitution would not apply here.

Legal challenges to that assertion are among a number of factors that have delayed the government’s efforts to conduct trials here for years.

A federal judge in Washington, James Robertson, refused a last-minute plea by Mr. Hamdan’s lawyers to stop this trial. But in his July 18 ruling, Judge Robertson said serious questions remained about the system here, calling it “startling” that evidence obtained through coercive interrogations was permitted to be used in trials.

But with the trial inaccessible to the public and no broadcast television cameras in the courtroom, reporters are the only way for the wider world to know what is happening. The Pentagon’s public relations theme has been “transparency,” yet the freedom of the press has its limits at Guantánamo.

Legal documents are often released months after they are filed with the military commission, if at all. Military officials run and attend news conferences, both for the prosecution and the defense. Reporters are accompanied by military escorts almost everywhere, including to meals and court.

The spokeswoman for the detention camp, Cmdr. Pauline Storum, said it was “standard policy to require media be escorted,” and that the military sought to provide journalists access in a way “that balances the protection of operation security with providing information.”

With few seats designated for reporters in the courtroom, the Pentagon set up closed-circuit televisions at a news media center in an old hangar. During some critical moments in the first week of testimony, the courtroom camera was pointed away from witnesses’ faces and the evidence, including documents and videotapes.

When a reporter noted that in America reporters were permitted to see witnesses and evidence, a spokeswoman for the Office of Military Commissions at the Pentagon, Maj. Gail Crawford, responded, “This is not America.”

Without explanation, the camera was soon back on the witnesses.

One after another, Federal Bureau of Investigation agents and other criminal investigators took the witness stand last week to describe damaging admissions they said Mr. Hamdan had made in interrogations, including his descriptions of attending a terror training camp and Mr. bin Laden’s preparations for attacks.

The agents acknowledged that it was official policy to deviate from their normal procedure of informing Mr. Hamdan of any constitutional rights.

One of the agents, George M. Crouch Jr., testified that he had helped arrange in June 2002 for Mr. Hamdan to call his family. Mr. Hamdan, who had been in custody for seven months and had been allowed no contact with the outside world, “was concerned that they would think he was dead,” the agent testified.

Mr. Pollard said holding someone incommunicado for months sounded like the kind of “disappearances” practiced by other countries. But in the court at Guantánamo, the reference did not cause a ripple.

The interrogations of Mr. Hamdan have caused him to sometimes think the trial is just another method of interrogation, a psychiatrist who interviewed him here testified. “He doesn’t know if this court is real,” the psychiatrist, Dr. Emily A. Keram, said.

In June, the Supreme Court ruled that detainees here had a constitutional right to challenge their detentions in federal court. Some lawyers said the ruling suggested that other parts of the Constitution, like the Fifth Amendment’s right against self-incrimination, might apply here.

That could have undercut the case against Mr. Hamdan. But the military judge, Capt. Keith J. Allred of the Navy, ruled that “the Fifth Amendment of the Constitution does not apply to protect Mr. Hamdan.”

Even so, the judge excluded some of Mr. Hamdan’s statements, saying they were given in the “highly coercive environment” of an Afghan prison. But he allowed many other statements by Mr. Hamdan to be entered as evidence, including some that defense lawyers contend were coerced. One of the F.B.I. agents, Ammar Y. Barghouty, said Mr. Hamdan seemed to realize during the interrogations that he had few options. “A drowning man will reach for a twig, and I am a drowning man,” Mr. Barghouty quoted Mr. Hamdan as saying.

Mr. Hamdan’s lawyers say appeals are likely from any conviction here, setting the stage for rulings, perhaps years from now, about whether the courts here meet American standards.

However the American courts eventually sort out the Guantánamo legal claims, the trial here is proceeding with its own idiosyncrasies. A prosecution witness presented an organizational table of Al Qaeda’s leadership from when Mr. Hamdan was part of Mr. bin Laden’s security detail. The chart included an entry for the head of the detail, a Moroccan, Abdellah Tabarak, who himself was held at Guantánamo. He was released in 2004, four years before the start of Mr. Hamdan’s trial.

Asked about the unusual circumstance that an employee was on trial while a man who may have been his boss had been released, a Pentagon spokesman, Cmdr. Jeffrey D. Gordon, said, “The transfer of detainees takes various factors into consideration,” including a receiving country’s promise “to mitigate the threat.”

Ben Wizner, an American Civil Liberties Union lawyer who is an observer here, said the experiences of Mr. Tabarak and Mr. Hamdan seemed to underscore the contradictions of the legal system here.

Mr. Wizner said there was a more fundamental contradiction underlying the trial. The Bush administration insists that even if a detainee is acquitted, officials could hold him indefinitely.

“Where else in the world,” Mr. Wizner said after court one day, “is someone being prosecuted for a crime who is already serving a life sentence and will continue to serve one if he’s acquitted?”