State Universities versus State Prisons;
And Marijuana Legalization as a Solution
By Juan Cole / December 4, 2008

Why is tuition so high in state universities that the NYT is wondering if families will go on being able to afford it?

As someone who has observed this rise in tuition over an academic career of 30 years, as graduate student and professor, I have some theories from an insider perspective.

State universities have had to raise tuition because state legislatures have continually cut back every year the amount of state funding for them. Already in 2005 this article in Philanthropy News Digest explained:

For example, less than 14 percent of the University of Oregon’s total revenue came from state funds in 2003-04, compared to 32 percent in 1985-86, while tuition fees accounted for more than 33 percent of the university’s budget, compared to 22 percent twenty years ago. Meanwhile, the University of Michigan has lost 12 percent of its state funding, or $43 million, over the past two years. According to UM spokeswoman Julie Peterson, state money now only accounts for 8 percent of the university’s budget. “We can’t rely on state funding alone,” said Peterson. “It simply isn’t enough.”

That statistic, whereby the University of Oregon went from having 33 percent of its total revenue from state sources in 1985 to 14 percent in 2005, was typical of what happened throughout the whole country. The typical revenue streams for state universities used to be 1) State support, 2) tuition and fees, 3) Federal grants, and 4) alumni donations and the resulting endowment. At some state universities, the state contribution may now be the fourth largest source. 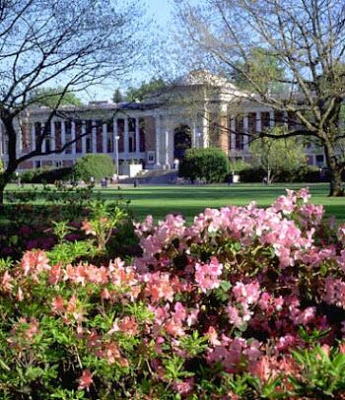 Now, why did states cut back the universities so much? It wasn’t that the state legislators were bad people or anti-intellectuals for the most part.

The Reagan/ Grover Norquist line that government is not the solution, government is the problem, and the demand for lower taxes (especially on the wealthy) was influential in many states. So essentially the American big business class of about 3 million people was given the opportunity to quadruple its vast wealth through lower taxes (when you lower taxes on a particular segment of the public, that is wealth distribution in their favor). Meanwhile public functions of government are cut back and everybody else gets potholes, closed public libraries, underfunded state universities, etc.

I can remember when I started grad school at UCLA in 1979 I heard on the radio that because of steep cutbacks in property taxes, the state would no longer be able to afford to spray for mosquitoes. I thought to myself, lord, they’ll end up giving themselves malaria to avoid a millage!

A big drain on state budgets is the penitentiary system. In just the decade 1980 to 1990, the prison and jail population in the US doubled. Since 1980, the prison population has quadrupled. By the end of 2006, over 2 million persons were in prison and another 5 million were on probation or on parole.

I remember reading in the Ann Arbor News in 1988 about a big debate at the statehouse in Lansing over funding for prisons versus funding for universities. The prisons won.

In these same nearly four decades, there have been substantial declines in violent crimes and crimes against property in the US. The vastly increased prison population was produced by unreasonably long prison sentences for non-violent crime, by ridiculous 3-strikes-and-you-are-out life sentences and by the completely failed ‘war on drugs’ and by mandatory sentencing guidelines imposed by legislatures on judges in drug cases. Half of prisoners in state prisons did not commit a violent crime, and 20% are drug offenders.

This vast expansion in the number of imprisoned Americans required states to build prisons and to pay large amounts of money to keep people in them.

The states had to put their money into prosecuting, trying, imprisoning and then supporting to the tune of like $20,000 a year a bunch of . . . potheads.

So obviously the states had no money to spend on state universities, which were cut loose, and had to raise tuition and hit their alumni up for contributions just to try to keep their heads above water.

Of course, universities faced increased costs at the same time. European monopolies drove up the costs of medical journals in ways that the European Union should look into. Digitalization has been a huge added cost that cannot be escaped (in many cases it means paying twice for books and other materials, once in hard copy and once in digital form.) Universities with medical schools face the high costs of acquiring increasingly high tech, state of the art medical equipment. Etc.

But I think the ‘war on drugs’ and the cost of prisons has deeply harmed state economies and has hurt access to state universities for working and middle class families.

Marijuana in particular may well have important medicinal properties, and it should just be legalized.

This is a conclusion a lot of frustrated law enforcement officials have come to, and they are campaigning for an end to prohibition. Reuters has more.

It is true that some proportion of the population may face addiction problems from marijuana. But it is not as if it isn’t already a multi-billion dollar business and widely available. About 15 percent of Americans regularly use it. And about 1/5 of the population is susceptible to alcohol addiction, but that doesn’t impel us to a second Prohibition in its regard. Use some of the tax receipts on the industry to fund treatment of those who can’t handle it. A lot of the deleterious effects of being high come from people driving under the influence. But actually you could just mandate that the auto industry put in ignition switches that only a sober person has the reflexes to make work. Since we are likely to own the auto industry soon, we should be able to do what we want. And besides, green mass transit is much better than individuals driving around wreaking mayhem,and a pothead on a subway isn’t much of a threat to anyone. We should move in that direction for all sorts of reasons.

I can remember reading an op-ed in the NYT years ago arguing that there are 60 million crimes a year in the United States, but only a tiny fraction of the perpetrators is ever actually prosecuted and a smaller fraction still brought to trial. I thought to myself, and a good thing too! How would we pay for 60 million prisoners? And, if you have a country of 280 million people committing 60 million crimes a year, you clearly just have way too many laws.

If the Religious Right could, it would just close down all the biology classes in the country (because after all they teach that wicked Darwin) and leave the development of biotech to the South Koreans, with Americans–denied the wealth that biotechnological innovation will bring in–turned into unemployed riffraff.

It turns out that if we had more personal freedoms, we’d have more state monies and could educate ourselves to develop our potential as free human beings.

In the past 40 years, the snowball has been going in the other direction– fewer personal freedoms, a vast gulag of the incarcerated, and less and less state money for the development of the minds of the public. We’ve built ourselves a big ignorant prison, with a loud-mouthed fundamentalist preacher for a warden, and called it America.

We should legalize pot, and tax the resulting industry. We should repeal mandatory sentencing guidelines and develop rehabilitation strategies rather than putting the ill-behaved in expensive state hotels. And we should go back to having state-funded state universities.

This entry was posted in RagBlog and tagged American Society, Marijuana, Prisons. Bookmark the permalink.