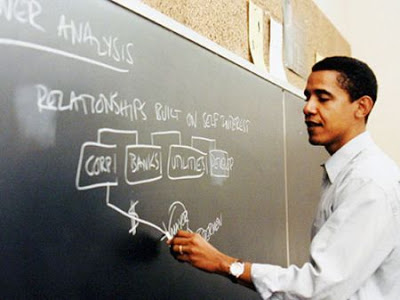 After graduating college, Barack Obama worked for three years, first in Harlem and then in Chicago, as a community organizer.
‘Community organizers work in neighborhoods that have been hit hardest by the failing economy’
September 4, 2008

Community organizers across America, taken aback by a series of attacks from Republican leaders at the GOP convention in St. Paul, came together today to defend their work organizing Americans who have been left behind by unemployment, lack of health insurance and the national housing crisis. The organizers demanded an apology from Alaska Governor Sarah Palin for her statement that community organizers have no “actual responsibilities” and launched a web site, Community Organizers Fight Back, to defend themselves against Republican attacks.

Though many people are unfamiliar with community organizing, the job is both straightforward and vital: community organizers work with families who are struggling–because of low wages, poor health coverage, unaffordable housing, and other community problems–so that collectively, they can fix those problems and make government respond to their day-to-day concerns. Organizers knock on doors, attend community meetings, visit churches and synagogues and mosques, and work with unions and civic groups and block associations to help ordinary people build power and counter the influence of self-interested insiders and highly paid lobbyists at all levels of government.

* Former Mayor Rudy Giuliani said: “On the other hand, you have a resume from a gifted man with an Ivy League education. He worked as a community organizer. What? [Laughter]…I said, OK, OK, maybe this is the first problem on the resume.”

* Governor Sarah Palin said: “I guess a small-town mayor is sort of like a community organizer, except that you have actual responsibilities.”

Community organizers were quick to fire back.

“I have ‘actual responsibilities,’” said Jacqueline del Valle, a community organizer in the Bronx. “If Mayor Giuliani and President Bush cared more about working people instead of just people who can hire high-powered lobbyists, maybe I wouldn’t have so much responsibility. Maybe working people would have an easier time in America today. But that’s not our reality, and they don’t have to mock us while we’re trying to clean up their mess.”

The community organizers launched their new web site to defend themselves against Republican attacks. They emphasize that their work will be necessary as long as lobbyists have undue influence over American government and the economy continues to fail people who work hard and still struggle to provide for themselves and their families.

2 Responses to Community Organizers Fight Back