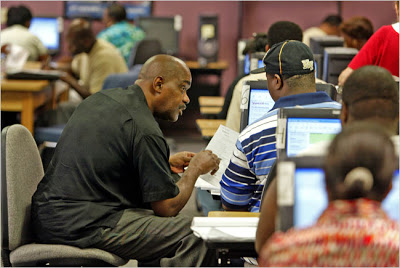 The unemployment rate jumped to 6.1 percent in August, its highest level in five years, pushing the job troubles of American workers onto the political stage as the presidential campaign enters its final eight weeks.

So far, 605,000 jobs have disappeared since the start of the year, with employers slashing 84,000 jobs in August alone, the Labor Department reported on Friday. And even Americans who are still employed are facing tough times.

Raises have not kept up with the rising cost of living, putting more pressure on workers as high gasoline and food prices curtail their spending power.

The bleak data, which came as the two presidential candidates began a two-month sprint to Election Day, clearly raised the challenge facing Senator John McCain, the Republican candidate. Economic downturns are almost always bad for the incumbent party. In 1980, when unemployment rose more than a percentage point during the year, and several months showed year-over-year declines, the incumbent, Jimmy Carter, lost. In 1992, jobs were down, although the unemployment rate did not rise that much, and President Bush lost his bid for re-election.

In a statement Friday, Mr. McCain said that “Washington has failed to act” to improve the poor economy.

“Americans are hurting and we must act to create jobs,” he said. He vowed to enact a jobs program and help retrain workers for the changing market.

While Mr. McCain has tried to distance himself from President Bush, Senator Barack Obama, the Democratic candidate, tried again Friday to link the Republican candidate to the current administration. Mr. Obama argued that his opponent was “intent on continuing the economic policies that just this year have caused the American economy to lose 605,000 jobs.”

“Today’s jobs report is a reminder of what’s at stake in this election,” Mr. Obama said in a statement.

The Obama campaign called on Congress, which returns next week, to enact another stimulus package, using the senator’s $100 billion proposal as a starting point.

An economic adviser for Mr. McCain, Douglas J. Holtz-Eakin, speaking for the campaign, said Congress should consider another short-term stimulus, but did not specify whether that should be more rebate checks or come in some other form, like tax cuts.

The unemployment rate, which rose from 5.7 percent in July and from 5 percent in April, is at its highest level since September 2003. While teenagers accounted for most of the earlier increase, the job losers in August were mostly over 25 and college educated as well as high school graduates.

“These numbers just cry out to me that the job market is in a recession,” Stuart Hoffman, the chief economist of PNC Bank, said.

Stocks on Wall Street fell after the release of the report, but the Dow Jones industrials recovered and was up slightly in afternoon trading.

Production workers in the manufacturing industry were hit hardest in August, with 61,000 workers losing their jobs. Nearly 60,000 administrative workers, including secretaries and temp workers, were laid off.

Gains came in the education and health care industries, which added a total of 55,000 jobs. But those were offset by broad job cuts at restaurants, auto dealers and factories that make parts for cars and other transportation equipment.

It was the eighth consecutive month that the economy has shed jobs, which is, historically, a symptom of recession.

Layoffs have picked up speed in the last three months, contrary to earlier estimates that they had begun to plateau. The government now says that 100,000 jobs were lost in June, double its original estimate.

“Working families are in trouble,” Jared Bernstein, an economist at the Economics Policy Institute in Washington and an adviser to Senator Obama, said. “This spike in the unemployment rate occurred exclusively among adults who are 25 and older. These are not teens; many of these folks depend on their jobs and their paychecks, and in this climate that means they’re suffering.”

Most workers are effectively earning less than they were a year ago. Hourly wages for rank-and-file workers — those not in supervisory or managerial positions — grew 3.6 percent between last month and August 2007. That was a faster growth rate than July, but below the rate of inflation.

The clear signs of pain in the labor market come as the economy continues to grow; between April and July, the economy expanded at a relatively brisk pace of 3.3 percent, according to the Commerce Department.

Businesses have been benefiting from high foreign demand for American-made goods, which has kept production high. But little of that activity, analysts said, has translated into assistance for the average American worker.

“Whatever is growing the economy, it’s not showing up in the jobs market in any way at all,” Mr. Bernstein said.

Companies may be terminating workers to cut costs in anticipation of tougher times ahead. Many analysts believe the global economy has entered a broad slowdown, which could depress export sales and put a dent into American business activity. Officials at the Federal Reserve believe activity will slow sharply for the rest of the year before returning to a faster growth rate in 2009.

The Labor Department’s jobs report is considered the most reliable snapshot of the nation’s economy in any given month. The unemployment rate is estimated by surveying thousands of households, while the data on job cuts is compiled from reports from employers.

Also on Friday, a new report showed that the outlook for the housing market remained troubling, though there are some early signs of improvement. The number of home loans in foreclosure jumped in the second quarter to another record but the percentage of borrowers who are starting to fall behind declined, according to data from the Mortgage Bankers Association.

This entry was posted in RagBlog and tagged Economy, Inflation, PresidentialCampaign, Recession, Unemployment. Bookmark the permalink.