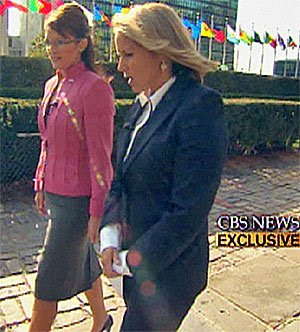 Gov. Sarah Palin walks along the grounds of the United Nations with Katie Couric on Wednesday.
Conservative columnist Kathleen Parker’s call for Palin to withdraw a ‘watershed moment’
By Kate Phillips / September 26, 2008

The drip, drip, drip of bad reviews keep falling this week against Gov. Sarah Palin, whose two-day segments of interviews with CBS’ Katie Couric have weakened conservatives’ initial embrace and enthusiasm for the vice-presidential nominee. As if Senator John McCain already hadn’t faced a rough week, which started with conservative columnist George Will bemoaning the Republican candidate’s positions on the economic bailout and suggesting Mr. McCain may be unfit to be president.

Now, conservatives have never warmed to Senator McCain this time around, but they were wowed by Mr. McCain’s selection of Ms. Palin as his running mate and at first, circled the wagons to defend her, despite her lack of foreign policy experience. She talked their values and represented small-town America, something neither ticket had offered to anyone before she surfaced.

But it seems a watershed moment occurred online earlier today when Kathleen Parker, a writer for TownHall.com, reversed her initial support for the Republican vice-presidential nominee and said Ms. Palin should drop out. Put the country first, she basically advised, by saying you need to go take care of your family first.

Palin didn’t make a mess cracking the glass ceiling. She simply glided through it.

It was fun while it lasted.

Palin’s recent interviews with Charles Gibson, Sean Hannity, and now Katie Couric have all revealed an attractive, earnest, confident candidate. Who Is Clearly Out Of Her League.

No one hates saying that more than I do. Like so many women, I’ve been pulling for Palin, wishing her the best, hoping she will perform brilliantly. I’ve also noticed that I watch her interviews with the held breath of an anxious parent, my finger poised over the mute button in case it gets too painful. Unfortunately, it often does. My cringe reflex is exhausted.

And then Ms. Parker winds it up, turning the backlash against women who criticize women on its head:

If Palin were a man, we’d all be guffawing, just as we do every time Joe Biden tickles the back of his throat with his toes. But because she’s a woman — and the first ever on a Republican presidential ticket — we are reluctant to say what is painfully true.

McCain can’t repudiate his choice for running mate. He not only risks the wrath of the G.O.P.’s unforgiving base, but he invites others to second-guess his executive decision-making ability. Barack Obama faces the same problem with Biden.

Only Palin can save McCain, her party, and the country she loves. She can bow out for personal reasons, perhaps because she wants to spend more time with her newborn. No one would criticize a mother who puts her family first.

Do it for your country.

The National Review’s Kathryn Jean Lopez chimed in: “I don’t know Sarah Palin. Having missed the last cruise to Alaska, I’ve actually never met her. National Review wasn’t on her list of stops this week in New York. So I can’t pretend to know what her wiring is all about. But I know I like a lot of what I’ve heard her say. I also know a lot of what I like about her could be projection. I’m not where my friend Kathleen Parker is — wanting her to step aside to spend more time with her family and Alaska — but that’s not a crazy suggestion. She’s right to say that something’s gotta change.”

Ms. Parker’s words fell like dead weight on top of earlier columns this week on the right-leaning side of the blogosphere about the McCain-Palin ticket.

In a column on Thursday, conservative Rich Lowry compared Senator McCain to the “proverbial cartoon character over the edge of the cliff, in midair, desperately flapping his arms and somehow maintaining altitude.” Mr. McCain, he continues, has been “making moves that mark him as different, but can be seen as risky or gimmicky.” One of those moves, according to Mr. Lowry, was adding Governor Palin to the Republican ticket:

Does Palin know enough to be a national candidate right now? No, but she can be mostly walled off from the press. Will attacking Obama on Fannie and Freddie open McCain to attack because one of his top aides lobbied for the organizations? Yes, but he can bulldog through it. Is going to Washington going to help much of anything? Probably not, but the symbolism matters. All the unconventional moves risk eroding McCain’s reputation as a steady hand, but the alternative is simply being overwhelmed by the gravitational pull of the public’s desire for change.

And at The American Spectator, Philip Klein twice reviewed Governor Palin’s interviews this week. At first, he said: “Her answer that not supporting a bailout could mean a Great Depression was off message and irresponsible. For the rest of the interview, it was just lots of tired cliches, and random jargon that made it seem as if she was reading off of mental index cards. I know a lot of conservatives like Sarah Palin and always rush to her defense. But it’s absolutely not meant as an insult to say that she simply is not ready to be a heartbeat away from the presidency.”

But in a second take, Mr. Klein came away a little bit less judgmental about some of her answers, but said he wasn’t swayed away from her not being qualified. Still, he added: “What I am saying is that Palin is in a situation in which she has to field questions on a lot of subjects that she doesn’t know a lot about. Rather than try to spit out rehearsed lines over and over again, she would be better off, as much as possible, to speak in her own words, rooted in her own values, and sense of right and wrong.”

The Times’s David Brooks earlier challenged conservatives who were thrilled by the Palin pick, supporting her “on the grounds that something that feels so good could not possibly be wrong” — even though others have raised serious doubts about her qualifications. In his Sept. 15 column, Mr. Brooks made an argument for the importance of “prudence.” He asked:

So, does Governor Palin have it? Mr. Brooks wrote: “Sarah Palin has many virtues. If you wanted someone to destroy a corrupt establishment, she’d be your woman. But the constructive act of governance is another matter. She has not been engaged in national issues, does not have a repertoire of historic patterns and, like President Bush, she seems to compensate for her lack of experience with brashness and excessive decisiveness.”