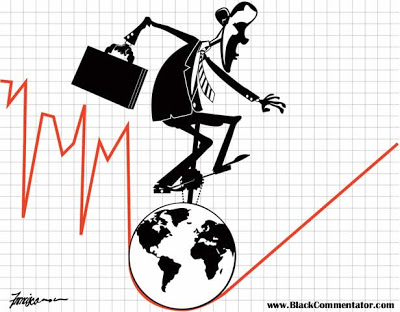 Financial crisis continues to take its toll:
The burden that haunts Obama

WASHINGTON, DC — With the midterm election less than a month away and the economic crisis unabated, the Obama Administration may be at a crossroads.

The President’s own advisor, former Federal Reserve Chairman Paul Volcker, says the financial system is “broken.” High unemployment is not dropping and home foreclosures are up. The Obamacrats are being blamed for the economic downturn and the economy has become “the issue” of the November midterm elections.

The signs of an economic recovery are hard to see, and tensions with China, a leading trade partner, may be putting the country on the cusp of a trade war. Add to this the trillions poured into two wars we are not winning, and you have the elements of a perfect storm that some fear could lead to a depression or even a systemic collapse.

With the President’s popularity slipping and his opposition surging (at least in the media if not in the streets), the Democrats are expected to lose many seats, if not control of the Congress. Some in his party have been reduced to arguing, “we may not be great, but we are better than the other guys.” There is an anti-incumbent mood in both parties and the rhetoric (but not yet the reality) of revolution is motivating parts of the electorate on both sides.

In the White House, the President has become more of a manager than a militant: initially trying to please all sides with appeals to bi-partisanship, and later with programs to placate the military and Wall Street.

Wall Street helped fund Obama’s 2008 victory. He seems to have believed that policies that would support and even enrich the private sector would lead to more job creation and cooperation.

That didn’t happen — and now more and more billionaires are funding the Republicans with no pretense to promoting equality or to providing help for the middle class. The greed that drives these wealthy elites seems to know no bounds.

One by one, his chosen policy wonks have deserted the White House like those proverbial rats leaving a sinking ship.

First to go was wunderkind budget director Peter Orzag, then Christina Romer who headed his Council of Economic Advisors, followed by Larry Summers , the chief economic advisor and former Harvard President who was forced out of Harvard for remarks hostile to women. Finally, Obama’s Chief of Staff, former Congressman Rahm Emanuel, has also said sayonara to return to Chicago for a mayoral run.

Left in place — but hardly left – is Treasury Secretary Tim Geithner, Obama’s Ambassador to Wall Street and point man with China. Geithner and his former boss, Ben Bernanke, who heads the Federal Reserve Bank, see themselves as servants of stability wedded to big banks and the strategy of the soon to be departed. They have no progressive pretensions. Little has changed for them.

The only claim this crew could make about achievement is that they averted something worse from happening. They may be correct, but proving a negative is difficult and doesn’t play well with voters who are not well-versed in the reasons behind the financial crisis. A “jobless recovery” is no recovery at all.

They are right now considering a new bailout being urged by the International Monetary Fund.

To placate his base and the unions, Obama has appointed another Harvard Professor, Elizabeth Warren. Her role will be to assist in shaping the new Consumer Protection Bureau that she herself proposed, the only financial reform that enjoys any popularity.

Warren is outspoken and supported by progressives, yet it is not clear if she will end up with any power to run what she had hoped would be an independent agency. However, it ended up being tucked away as a bureau in the Federal Reserve Bank. As a result, some analysts fear she is being co-opted and politically neutered.

On the left, filmmaker Michael Moore speaks for many disenchanted Obama supporters who feel betrayed by the President’s predictable turn to the safety of the mushy middle. “Sadly, it’s a situation the Democrats have brought upon themselves — even though the majority of them didn’t create the mess we’re in,” he writes.

But they’ve had over a year and a half to start getting the job done to fix it. Instead, they’ve run scared ever since they took power. To many, the shellacking they’re about to receive is one they deserve. But if you’re of a mindset that believes a return to 2001-2008 would be sheer insanity, then you probably agree we’ve got no choice but to save the Democrats from themselves.

Moore’s populist progressive proposals include indicting Wall Street criminals — a proposal I put forward in my film Plunder — and imposing a moratorium on home foreclosures, something President Franklin Roosevelt did as a part of the New Deal in the 1930s. (Some big banks began suspending foreclosures after it was revealed they were breaking the law in at least 23 states.)

Moore’s views were not even present at a Washington demonstration backed by the unions in early October. And they are a long way from being implemented for at least four reasons.

First, they would represent a U-turn for an Administration that is nervous about appearing too anti-business and that often postures left to move right. Obama’s financial and health care reform — the administration’s two big “accomplishments” — reinforced corporate power more than transforming it.

And then there’s the Congress under the sway of business interests with so-called “Blue Dog” Democratic conservatives, not to mention the rabidly anti-populist Republicans, able to filibuster and stop the kinds of changes Moore hopes for.

Oddly enough it was the banks that froze foreclosures in 23 States when fraudulent practices were unmasked. As Naked Capitalism noted,

We’ve discussed the fact the fact that banks have become so powerful in Florida that they have managed to get what amount to kangaroo foreclosure courts created. Not surprisingly, the assembly line imitation of justice railroads borrowers, and prevents legitimate grievances from being heard.

It turns out that banks in that state are so confident of their above the law status that they’ve also taken to casually changing the locks on and entering homes they don’t own, meaning haven’t foreclosed upon. This has become sufficiently common that the local press has taken notice.

And, very important, the Supreme Court remains under the sway of free market fundamentalists who genuflect to corporate needs in almost every decision.

So a stalemate remains in place with election rhetoric concealing the conventional wisdom and status quo orientation that make deeper reform unlikely. We seem to be in the era of one step forward and two back where the idea of change serves as an election slogan — not a commitment to more fundamental repairs.

The political system is as broken as the economic one, and there is no Superman on the horizon to fly in and fix it.

[“News Dissector” Danny Schechter is a journalist, author, Emmy award winning television producer, and independent filmmaker who also writes, blogs, and speaks about media issues. Schechter directed Plunder: The Crime of Our Time, and a companion book, The Crime of Our Time: Why Wall Street Is Not Too Big to Jail. Contact him at dissector@mediachannel.org. This article was originally commissioned by Al Jazeera.]