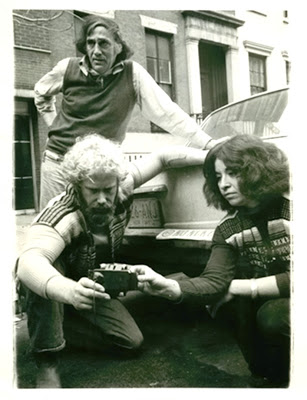 Last week a story surfaced about Yasir Afifi, a 20-year-old Egyptian-American student, who discovered an FBI homing device on his car. Thirty-five years ago, the FBI put a homing device on my car. To my surprise, given current technical advances in miniaturization, my device appeared to be not much larger than the one Afifi found.

I discovered my device because a wire hung down suspiciously; so did Afifi. Both devices were attached to our cars by magnets. FBI agents visited Afifi to retrieve their device; in my case, the FBI stole it back out of our lawyer’s office. The agent did this, I learned subsequently, because the cost of the missing device came directly out of the agent’s pocket.

In 1975, putting a homing device on my car without a warrant was against the law. My late husband Stew Albert and I sued the FBI. Bill Kunstler and the Center for Constitutional Rights represented us. Defendants in our lawsuit were Acting FBI Director L. Patrick Gray, Mark Felt of “Deep Throat” fame and Assistant Director Edward Miller. In 1978, Gray, Felt, and Miller were indicted for approving such illegal acts. Gray resigned because of Watergate; Felt and Miller were convicted, then subsequently pardoned by President Reagan.

My daughter is the lawyer in the family, not me, but I believe what the FBI did last week to Yasir Afifi is legal today under the USA Patriot Act and FISA.

This is my story:

The air around my ancient white Volvo felt charged with negative ions. I couldn’t put my finger on it, exactly. Perhaps my queasiness came from a half-formed memory of a man in a beige trench coat and fedora who I may or may not have spotted the night before lurking in a semi-dark stairwell next to Bill Kunstler and Margie Ratner’s red brick home on Gay Street in the Village. This is New York, I tell myself, everybody lurks in New York.

Stew and I return to our Volvo before alternate-side-of-the-street-parking-tow-away kicks in. A man in what I hallucinate to be a black trench coat, scurries down the sidewalk on the opposite side of the street..

Gumbo, are you going nuts or what? Then I notice it. Smack in the middle of the Volvo’s rear bumper is a well-defined white patch, serene amid the spewed up brown dirt the car accumulated on yesterday’s drive down from our beloved isolated cabin in the Catskill Mountains. Hanging down in the very center of the clean spot is a six-inch-long wire.

“Hey Stew, cummere.” I say. “Look at this. I think there might be something the matter with the car.”

“Whaddaya think it is?” Stew asks. He knows nothing about cars. A Brooklyn boy, he’s never learned to drive. This is fine by me. For me, car equals freedom, although I’m feeling momentarily insecure about my knowledge of automotive issues. Three weeks earlier I’d sent much of this poor Volvo’s electrical system up in smoke when, in a fit of know-it-all feminist machismo, I’d installed a new battery by myself, poles reversed, and fried much of the Volvo’s wiring.

“Maybe something else happened to the electrical system.” I say. Still, I’m not deterred. I kneel down and put my arm up behind the bumper where I think the weird wire comes from.

I’ve chewed on this moment for years and yet have never been fully able to explain to myself what prompted Stew and me to do what we did next.

“Ok, so, I’m going to try and start the car and see if anything happens.” I tell Stew, “Wait over there on the sidewalk.”

“Well… uh….. No!” Stew is adamant. He sits down heavily in his customary place in the passenger seat then brushes his famous blond curls back off his forehead. Stew jokes later that he did not want to see a news headline reading: “Sexist Survives.”

I get behind the wheel, insert the key, and turn the ignition key. No click. No terrorizing silence. No explosion. The car starts. I feel my breath rush gratefully back into my lungs.

I open the driver’s door, get back out, go back to the rear of the Volvo and kneel down in the gutter, avoiding as best I can the cold running water and dirty gray slush left behind from the previous day’s pre-winter storm. This time, when I reach up along the wire, my hand emerges clutching a size C battery, with a piece of black electrical tape wrapped around it.

“Let’s get the fuck outta here.” Stew says at the exact same time I think it.

We cut across town on 79th through Central Park. The more I drive, the more visible is the trail of cars behind us — two yellow cabs, three basic black Detroit four doors and, if memory serves, one Central Park horse and buggy taking up the rear. I pass fashionable Madison Avenue shops, then make a left at 86th to cross the Park. My new best friends stay close, never out of range. They make no attempt to conceal themselves.

I panic. “Let’s go for Chinese,” I say. Stew agrees instantly. Chinese food is comfort food for Jews of my generation. That it might be foolish to leave the Volvo exposed and unattended on Upper Broadway does not cross my mind. The sweet-smelling hot and sour soup filled with slices of squirmy black mushrooms and seaweed fans of cloud ear fungus does its job; Stew’s and my rationality is restored; we head back to Bill and Margie’s. After all, if you think you may be in trouble with the law; it’s best to be in the company of lawyers.

Bill bends down and, with his long arms and large fingers, reaches far up under the Volvo’s rear bumper. He grunts, pulls out a 6” by 4” black box, with two intact batteries and the ubiquitous wire hanging down. Bill places the device in his kitchen freezer, which, he says will cut off its capacity to transmit. Then, always a Yippie, Bill contacts the press.

Over the years, I’ve often wondered who among us were the bigger schmucks — Stew and me, who gave the FBI access to our car by consigning it to the street, or the Keystone Cop FBI agents who installed a second, new, and completely functioning homing device.

Gray was, at the time, a leading candidate to succeed legendary FBI Director J. Edgar Hoover. Felt, the FBI’s key decision-maker on domestic spying, spilled the beans about the 1972 Watergate burglary to Washington Post reporter Carl Woodward, which led, ultimately, to the resignation of President Richard Nixon. Miller, the third person indicted, was an Assistant FBI Director of Intelligence between 1971 and 1974.

Miller made his appearance in my FBI files as the “go-to” person for the New York City agents who tailed me. In the early 1980’s close to 20 people received settlements of $10,000 each for the FBI’s illegal actions — which would come to approximately $60,000 for Stew and me in today’s money.

If I could offer any comfort to Yasir Afifi, it would be to say: don’t be afraid, hang in there. I wish I could promise that, one day, he’ll laugh about his homing device experience the way I can. Although we live in fear-based, anti-Arab, racist America, I nonetheless strongly encourage Yasir Afifi to exercise whatever remains of his constitutional right to legal redress.

[Judy Gumbo Albert is an original Yippie, along with Abbie and Anita Hoffman, Jerry Rubin and Nancy Kurshan, Paul Krassner, and Judy’s late husband Stew Albert. Judy has remarried, lives in Berkeley, California, and is currently writing her memoir, Yippie Girl. She can be found at www.yippiegirl.com.]