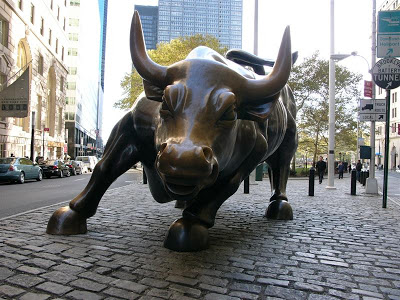 Wall Street: The bull is back.
Why Wall Street is winning

The hated financial center is bouncing back. How did they do it?

Two years ago, as financial reform was put on the U.S. Congressional agenda, a skeptical Senator, Dick Durbin of Illinois, spoke of the power of the banks over the country’s legislative process.

“They run the place,” he said matter-of-factly.

The comment was then treated as a sidebar in the few newspapers that carried it, perhaps because it hinted at how interests, not ideology, dictate what happens on Capital Hill.

The remark about a shadowy power structure far more important than all the partisan in-fighting that dominates the news is worth recalling as a way of explaining how little has been done to rein in Wall Street in the years since its crash virtually wrecked the global economy.

It is also worth realizing that the people who “run the place” usually do so in ways that rarely get high profile media scrutiny or even public attention.

During the deliberations on re-regulating banks, they mounted a formidable army of lobbyists. It was reported that as many as 25 industry lobbyists were assigned to each member of Congress.

Even as new laws passed to satisfy an angry public, the industry dominated the process of what the laws would cover and how.

They also spread money around to help politicians who helped them. For years those donations were made on a nonpartisan basis, with Democrats as well as Republicans the beneficiaries of carefully-targeted help. Today, they are cutting off the Democrats who pushed financial reform.

The corporate sector is following suit. Nominally “liberal” companies like BP, sharply criticized by the White House for the Gulf Oil spill, are pouring money, not oil, into GOP coffers.

As bipartisanship fades, and certain ideological lines are drawn more sharply, the bankers are now favoring the Republicans financially, perhaps to thank them for erecting a unified wall against tighter rules for banks.

The GOP, led by the pro-free market slogans of the Tea Party, are busy defunding regulators as well.

Right-wingers in turn are being funded by wealthy billionaire backers including the shadowy Koch Brothers who are responsible for backing the anti-union programs of governors like Scott Walker in Wisconsin. These campaigns are designed to neuter all opposition to a conservative agenda.

Meanwhile, President Obama reaches into the corporate sector for “help” on his economic “recovery” agenda. In recent months, he named Jeffrey R. Immelt, president of General Electric, a company known for outsourcing jobs, as his jobs advisor.

He plucked William Daley from the American Chamber of Commerce to become his Chief of Staff.

Daley recently scolded politicians for calling for the prosecution of Wall Street criminals. He said that job belongs to producers in Hollywood, not lawmakers.

These efforts have emboldened other arms of Wall Street to intervene in politics. The most visible last week was the statement by the ratings agency Standard and Poor’s that it was revising the country’s credit rating to “negative,” warning that it will consider lowering the long-term rating of the United States “within two years.”

Many stocks fell, but bond markets ignored it. Former International Monetary Fund economist Simon Johnson raised questions about their decision of a kind absent in most media outlets.

Writing on his website Baseline Scenario, Johnson noted that few outlets pointed out how inaccurate the ratings agencies had been at the height of the crisis, and how irresponsibly they hyped worthless bonds packed with sub prime junk. Yet once again they were treated as credible, despite their sloppy analysis.

The main problem is that S&P did not lay out even the most basic numbers or even point readers towards the nonpartisan and definitive Congressional Budget Office analysis of medium — and longer-term budget issues. This matters, because the CBO numbers definitely do not show debt exploding upwards immediately from today…

The revised credit rating is meant to push the administration and lawmakers into going after Social Security and Medicare. The right-wing now has an additional propaganda tool to push for draconian cuts in areas that will most hurt working and middle class Americans.

Here’s the kicker: Standard and Poor’s and Moody’s are private firms. They don’t work for the United States; they serve the interest of Wall Street banks. 2008 taught us that they are completely unaccountable.”

Doug Smith adds on the influential Naked Capitalism blog that Wall Street should know that joining the Tea Party jihad on government spending will be counterproductive for economic recovery.

We know the banksters control both parties and are immune from any threats to their bonuses or their liberty. Still, even on the banksters’ own terms of extend-and-pretend, these cuts are idiotic.

Despite all of its frauds and deceptions, Wall Street has bought its way out of the many pressures that it change its ways. In a special issue, New York Magazine concludes that in this economic war, “Wall Street Won.”

In the political realm, Wall Street faced the prospect of root-and-branch reregulation, up to and including the potential nationalization of the industry’s largest players, and in the cultural realm its transfiguration into a kind of pariah state. Once upon a time, the Street’s leading lights had been glamorized and admired to the point of worship; now the likes of Robert Rubin, Lloyd Blankfein, and Richard Fuld were relentlessly pilloried and demonized…

Yet today on Wall Street, all of that seems a very long time ago. Not only are the banks rolling in dough again, but their denizens’ customs and sense of self-esteem have largely reverted to the status quo ante.

A retired well-known journalist, James Clay Fuller, notes that media coverage of these issues adds to the confusion because it is often superficial and misleading.

The public is not just uninformed; it is unorganized on these issues and not fighting back. The power of the bank lobby can be compared to the pro-Israel lobby in the sense it dominates the discourse.

With a besieged Democratic administration siding with the banks, unions and activists may not be willing or able to challenge Wall Street. They are so desperate to hold on to the White House, they seem willing to pull any potential punches to make Wall Street a target.

Only a national high profile and populist campaign will be able to stop the financial industry from consolidating its clout. The banks are banking on their ability to stop such a campaign before it starts or gains any traction.

[News Dissector and blogger Danny Schechter made the film, Plunder The Crime of Our Time, treating the financial crisis as a crime story. Comments to dissector@mediachannel.org. Read more by Danny Schechter on The Rag Blog.]